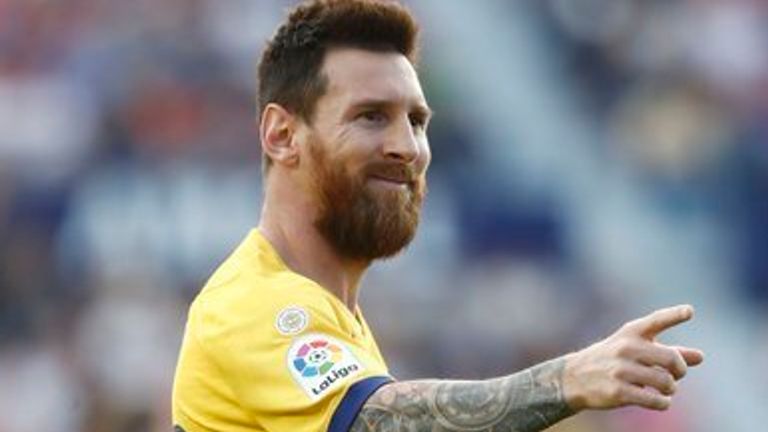 Lionel Messi will leave Barcelona after the La Liga club were unable to fulfill the player’s new contract with PSG already in talks with the Argentina forward.

The six-time Ballon d’Or winner has officially been a free agent since July 1 after he failed to agree terms over a renewal before his previous Barcelona contract expired on June 30.

However, the 34-year-old had been expected to sign a new five-year contract with the Catalan club, which would have seen his salary reduced by 50 per cent.

But this offer cannot be fulfilled by Barca due to “financial and structural obstacles” with Sky Italy reporting PSG hope to convince Messi to move to Paris instead.

Messi still wants to win trophies and be part of a winning project and PSG can offer him all that.

There’s also his close friendship with Neymar and their desire to play together again with the French side having a long-standing desire to sign the player which has always seemed almost impossible until now.

Messi has spent his entire career at Barcelona, ​​coming through the club’s academy before going on to score 672 goals in 778 appearances after making his senior debut in 2003.

LATEST NEWS | Leo #messi will not continue with FC Barcelona

A Barcelona club statement said: “Despite FC Barcelona and Lionel Messi having reached an agreement and the clear intention of both parties to sign a new contract today, this cannot happen because of financial and structural obstacles (Spanish Liga regulations).

“As a result of this situation, Messi shall not be staying on at FC Barcelona. Both parties deeply regret that the wishes of the player and the club will ultimately not be fulfilled.

“FC Barcelona wholeheartedly owes its gratitude to the player for his contribution to the aggrandisement of the club and wishes him all the very best for the future in his personal and professional life.”

Barcelona have been struggling to reduce their wage bill in line with La Liga’s financial fair play rules for this coming season, and have been in talks with vice-captains Gerard Pique, Sergio Busquets and Sergi Roberto about reducing their salaries by 40 per cent in return for contract extensions.

They have also been trying to sell several high earners including Antoine Griezmann, Ousmane Dembele, Philippe Coutinho, Samuel Umtiti and Martin Braithwaite but – again – have not yet found solutions for any of them.

Wage caps in La Liga are calculated prospectively based on a club’s financial health and they must adhere to their cap in order to avoid future financial penalties. The cost of the Covid-19 pandemic had severely reduced Barca’s budget for the 2021-22 campaign.

It was thought a €2.7bn investment in La Liga from private equity firm CVC would help Barcelona overcome their difficulties, but the injection has not proven enough to enable the club to hold onto Messi.

Barca’s opening La Liga game against Real Sociedad is in 12 days’ time, with Ronald Koeman remaining in charge at the Nou Camp following a disappointing first campaign with the club.

Analysis: The numbers simply do not add up…

Barcelona have been unable to register Messi because his new contract would break the club’s proposed wage structure for the 2021/22 season – despite his 50 per cent wage cut.

Wage caps in La Liga are calculated prospectively based on a club’s financial health and they must adhere to the cap in order to avoid financial penalties.

The cost of the Covid-19 pandemic has severely reduced Barca’s budget for the new campaign and, after further talks with the league and Messi on Thursday, the numbers – simply – do not add up.

A new investment in La Liga from CVC Capital Partners was announced on Wednesday and brought hope of a £230m windfall that would help Messi’s new five-year deal be financially viable.

However, sources in Spain have told Sky Sports News that Barcelona are – at the moment – opposing the CVC investment because they do not want to give up future revenue to the company, along with Real Madrid.

The deal was unanimously approved by La Liga’s executive board but the clubs are yet to vote on it and that is due to take place on August 12. However, clubs in La Liga and Segunda do not need Real and Barca’s approval for the deal to be Voted in.

Barcelona have declined to comment further than their statement when contacted by Sky Sports News, and we are also attempting to contact La Liga for their comment.

Kaveh Solhekol on The Transfer Show:

“This is all about money, that’s all this is about. Messi was on an incredible contract at Barcelona. He was on something like £100m a year. That ran out at the end of the last season, and going forward there was no way Barcelona could give him that kind of contract again.

“The first reason is that they have financial problems because of the pandemic. The second is the financial fair play rules in Spanish football, there was no way they could give him another contract of the same size.

“Throughout the summer they’ve been working on a compromise, and the deal on the table was that he would have to take a pay cut. Up until this week, it looked like he was willing to accept that, with his wages dropping to around £50m. But in the past couple of days, everything has changed.

“We don’t know yet if that’s because he feels like he can get more money somewhere else, maybe a club is talking to him and saying come to Paris, we want to reunite you with Neymar, or what Barcelona are saying is true, and even if Barcelona did give him a 50-per-cent pay cut they would not be able to keep him.”

Analysis: What will be the next step?

“If you rewind to this time last summer, Messi announced he wanted to leave Barcelona with one year remaining on his contract – he believed a clause in his contract allowed him to leave on a free transfer because he had noted his intention to leave the club by a certain date.

“Barcelona did not agree with that, there was a bit of a dispute between both parties and in the end, Messi reluctantly stayed at the club. He did say he wanted to leave and he cited family issues as well as another reason to finally decide he would remain at Barcelona.

“Since then, he has enjoyed a very good season, not so much trophy wise, but on the pitch for Barcelona and it seemed all systems go for a new, long-term contract that would take him beyond even his playing career – there was talk of life after playing, but within the institution of FC Barcelona.

“And now we have this news that Barcelona have said he will not continue at FC Barcelona and you just wonder now what the next step will be?

“Is this it, is this the full stop on Messi and FC Barcelona because they’ve said he will not continue with the club, or are there talks still to be had between both parties because they said it could not be formalized because of structural and economic obstacles.

“You wonder if those structural and economic obstacles can be overcome and yet provide a future for Messi at Barcelona. But as it stands, he does not have a future at that club.”