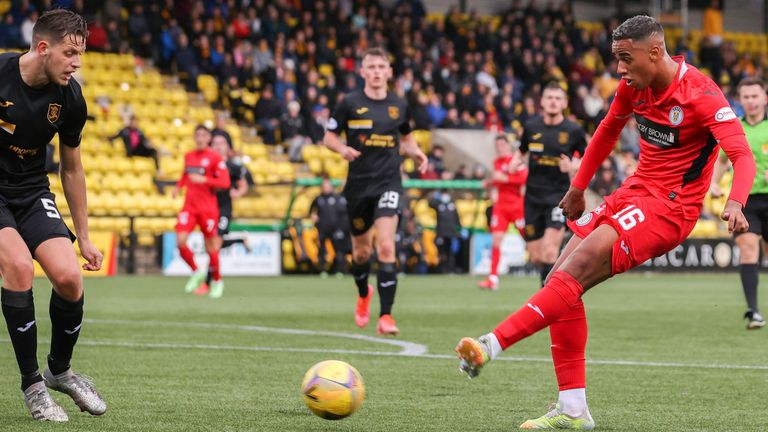 St Mirren stretched their unbeaten run to five matches as they beat Livingston 1-0 thanks to a first-half strike from Ethan Erhahon.

The Friends clinched their first league win of the campaign last weekend at home to Aberdeen and Erhahon’s goal at the end of a lightning counter-attack was enough to ensure Jim Goodwin’s side lifted themselves up to seventh in the Premiership table.

For Livingston, a third straight loss leaves them with just their recent shock win over Celtic as their only success in the top flight.

After some tentative early exchanges, it was St Mirren who earned himself the first meaningful sight at goal in the 15th minute.

Jamie McGrath found a pocket of space 40 yards from goal and slipped a bouncing pass through for Matt Millar to chase.

Just as it appeared the wing-back might win the foot race, home keeper Max Stryjek sped from his line to snuff out the attack at the edge of his box.

Livingston finally sparked some life into their attack six minutes later but Alan Forrest’s shot could not make it through a sea of ​​legs in the St Mirren defence.

Midway through the half, they then carved out the game’s first real opportunity.

Jackson Longridge’s tenacity won back possession for the Lions and Stephane Omeonga burst forward before slipping a pass wide for the supporting Odin Bailey.

The winger engineered room for the shot but Jak Alnwick was equal to the effort and beat it away.

Just as the home side looked to be gaining the upper hand, St Mirren made the breakthrough.

Livingston enjoyed an attacking corner but the Friends broke at speed and Erhahon drilled into the bottom corner from the left edge of the box after benefiting from a Marcus Fraser pass.

The Lions recovered and finished the first half the stronger of the two teams.

James Penrice combined well with Andrew Shinnie but Alnwick was equal to his eventual shot and the St Mirren keeper was untroubled by an Omeonga effort before Forrest’s drive was deflected across goal and wide.

In added time, Bailey’s deep corner was nodded back into the mix by Forrest but Ayo Obileye’s close-range volley was booted clear on the line.

Livingston began the second half as they finished the first and Longridge’s shot was deflected wide before they worked another clear sight at goal.

Forrest’s cross was deflected into the path of Bailey but the winger’s shot was deflected up off a St Mirren defender and over the crossbar.

The Lions pushed hard for an equalizer but it was St Mirren who threatened to grab the next goal.

Stryjek had to save from Millar and substitute Curtis Main before Conor McCarthy volleyed over with the goal at his mercy.

In the end, a second was not required as the visitors stood firm for another three points.