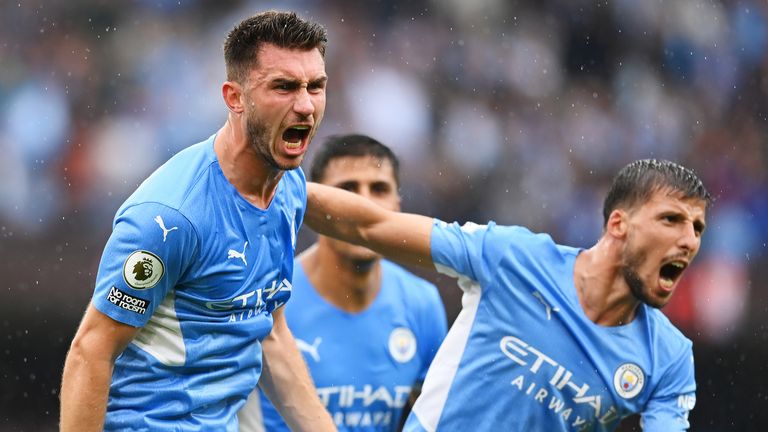 Jack Grealish scored on his home debut as Man City bounced back from defeat with a 5-0 thumping of Norwich City at the Etihad Stadium.

City were unrelenting from the first whistle to the last and took the lead after six minutes, as Grant Hanley’s attempted clearance from Gabriel Jesus’ cross hit Tim Krul and went into his own net.

Midway through the first period £100m man Grealish opened his City account, turning home another Jesus delivery (22), although he appeared to know little about it, and celebrated with his fingers in his ears as an apparent message to his detractors.

Aymeric Laporte scored his first goal at the Etihad from Ilkay Gundogan’s corner just after the hour (64) before Raheem Sterling, dropped from Pep Guardiola’s starting line-up, scored 10 minutes after coming on as Jesus racked up a hat-trick of assists ( 70) with a third low ball from out wide.

It took Norwich 78 minutes to muster their one and only shot of the game through winger Milot Rashica before substitute Riyad Mahrez fried in late on (84) as the Canaries’ punishing start to the season continued, while City earned a morale-boosting win to recover from their defeat at Tottenham last weekend.

Man of the match: Gabriel Jesus

Guardiola had never lost four games in succession and would probably have been happy to handpick Norwich as the opposition as he looked to keep that record in tact.

He had won his only other Etihad encounter with the Canaries 5-0 and his side clicked straight into gear to lead inside six minutes. City overloaded the flanks from kick-off and opened the scoring when Jesus turned Rodri’s diagonal ball across the box, where Hanley’s desperate block cannoned off Krul and into his own net.

It looked like being two nine minutes later when Torres slotted home emphatically but with Norwich still complaining about Rashica being left on his backside in the build-up, Graham Scott consulted the VAR monitor and overturned his original decision.

With another seven played, it was two. Jesus again found space out wide with another dangerous cross which Torres missed but Grealish turned at the back post, although the summer arrival had little time to adjust and appeared to know little about his debut strike.

The hosts’ intensity never dropped but they had to wait until the second half to add to the scoreline, when Aymeric Laporte notched a scrappy third from an Ilkay Gundogan corner for his ninth City goal, but his first on home soil.

Substitute Sterling, who has now started only six of Man City’s last 12 Premier League games, was given the final half hour to impress from the bench and tapped home City’s fourth 10 minutes later, finishing off Jesus’ center after a lovely through-ball from Kyle Walker.

Another substitute, Mahrez, added a stunning fifth in the final minutes as City responded to questions about their attacking output emphatically, firing in powerfully off the post from Dias’ lovely lofted ball into him.

Man of the match – Gabriel Jesus

City’s number nine was given a role more akin to an inside forward as Ferran Torres was preferred through the middle, but the Brazilian proved there might be life in his Manchester City career regardless of whether Harry Kane joins the club with a sensational performance.

Jesus set the tone when setting up Krul’s early own goal, and went on to register a hat-trick of assists in City’s emphatic victory. He managed only one shot acors the 90 minutes in his more withdrawn role but completed the most key passes (three) of anyone on the pitch.

Opta stats: City start with a bang yet again

Manchester City host Arsenal at the Etihad next weekend in their second home game of the season; kick-off at 12.30pm.

Norwich begin their Carabao Cup campaign with a home tie against Bournemouth on Tuesday; kick-off at 7pm. They then host Leicester in their next league game on Saturday; kick-off at 3pm.