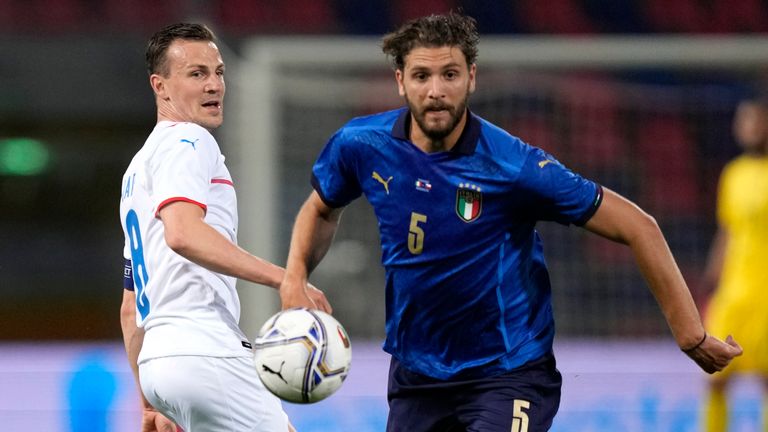 Manuel Locatelli has completed his move from Sassuolo to Juventus on an initial loan with an obligation to buy.

The Italy midfielder, who originally joined Sassuolo from AC Milan in 2018, will cost Juventus €35m (currently £29.8m) once the deal becomes permanent.

Locatelli was linked with Arsenal earlier in the transfer window, with Sassuolo chief executive Giovanni Carnevalli revealing in June that the Premier League side had made a bid for the player.

However, he indicated his preference was to remain in Serie A and the 23-year-old becomes Juventus’ first new arrival of the summer, and the first since the return of Massimiliano Allegri as manager.

The player was the Turin club’s top midfield target after playing a key role for the Italy side that won Euro 2020 in July.

Sky in Italy had previously reported that Monaco’s Aurelien Tchouameni or Chelsea’s Tiemoue Bakayoko – who spent time on loan at AC Milan and Napoli – were also on Juventus’ shortlist.

Cristiano Ronaldo has distanced himself from reports in Spain linking him with a return to Real Madrid by insisting his story at the Bernabeu “has been written”.

The 36-year-old has 12 months remaining on his contract with the former Italian champions and has not mentioned to the club that he wants to leave.

Juventus have not received a single offer from Real Madrid or any other club, and on Tuesday night the Portugal captain took to social media to quash any speculation that he could depart the Turin club.

In a lengthy Instagram post, Ronaldo wrote: “Anyone who knows me is aware of how focused I am on my work. Less talk and more action, this has been my guiding motto since the start of my career.

“My story at Real Madrid has been written. It’s been recorded. In words and numbers, in trophies and titles, in records and in headlines. It’s in the Museum at the Bernabeu Stadium and it’s also in the minds of every fan of the club “