Mark Magsayo, who Manny Pacquiao said ‘reminds me of myself’, wins by massive knockout | Boxing News 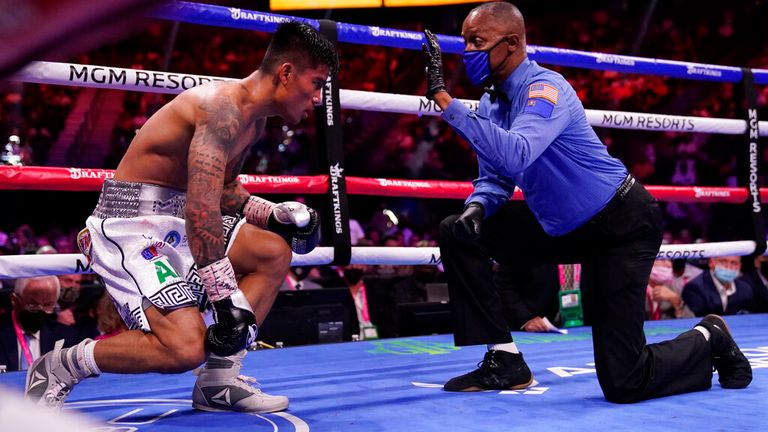 Mark Magsayo dramatically hauled himself up from the canvas to knock out Julio Ceja on Saturday night on his hero Manny Pacquiao’s undercard.

The Filipino featherweight was on the floor in the fifth round but survived to then earn a stoppage in the 10th.

Magsayo had knocked Ceja down in the first round with a left hook but was dragged into a rollercoaster of a fight.

Magsayo, trained by Freddie Roach who is famously also in Pacquiao’s corner, celebrated with a backflip.

The result for Pacquiao’s protégé was in danger when he sunk to the canvas after a Ceja body shot in round five.

He needed to cling onto Ceja at times to survive the most difficult moment.

But Magsayo landed a monstrous right hand which seemingly knocked Ceja out cold on his feet, before another punch sent him crashing down.

He is now unbeaten in 23 fights and is closer to a WBC featherweight title shot.

Carlos Castro recovered from a rocky start to stop the rugged Oscar Escandon in the final round👏 pic.twitter.com/ZvD44wjXgE

“He reminds me of myself, how we both struggled to come from nothing to a world-rated contender,” said Pacquiao after Magsayo signed a promotional contract last year.

“I love his work ethic and desire to become a world champion and I will do everything to help promote Mark and make his dreams a reality.”