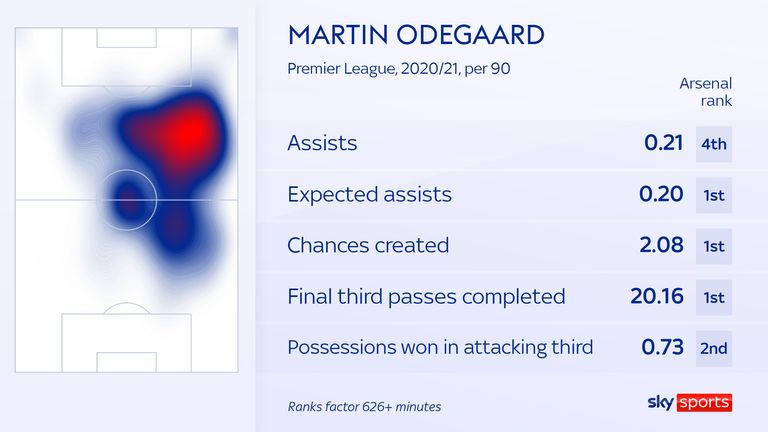 Arsenal have agreed a deal with Real Madrid for attacking midfielder Martin Odegaard.

The Norway international, who will join for an initial £30m fee plus bonuses, was in London on Wednesday undergoing a medical.

Personal terms are not expected to be a problem and Sky Sports News has learned Odegaard is fully vaccinated, so will not have to quarantine.

If he is registered by midday on Friday, Odegaard will be available to face Chelsea on Sunday.

The 22-year-old spent the second half of last season on loan with the Gunners after failing to break into the Real Madrid team under Zinedine Zidane.

He made 20 appearances across all competitions, with one of his two goals coming in the north London derby win over Tottenham in March.

Meanwhile, Arsenal will also continue to push for a deal for Sheffield United goalkeeper Aaron Ramsdale, who wants a move to the Emirates.

The clubs are getting closer on the overall fee and talks center around the structure of the deal – the amount up front and add-ons.

Barcelona are interested in signing Pierre-Emerick Aubameyang from Arsenal.

The La Liga club are willing to offer former Liverpool midfielder Philippe Coutinho in part exchange for the Arsenal captain.

Aubameyang, 32, signed a new three-year deal with Arsenal last year until 2024. The Gabon striker missed the Gunners’ opening-day Premier League defeat at Brentford on Friday through illness, alongside Alexandre Lacazette.

Aubameyang, who joined Arsenal for a then club-record fee in the region of £60m in January 2018, scored 15 goals for the north London club last season as Mikel Arteta’s side missed out on European qualification for the first time in 25 years.