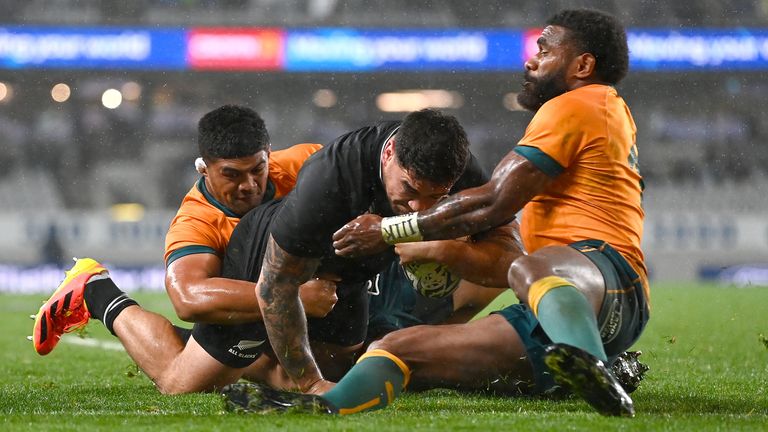 The Bledisloe Cup stayed in New Zealand’s hands for a 19th-straight year as the hosts racked up a record score against Australia in Saturday’s 57-22 win in Auckland.

Two tries from Codie Taylor, plus individual scores from Rieko Ioane, Brodie Retalick, Ardie Savea, Sevu Reece, Will Jordan and David Havili helped the All Blacks post their highest-ever points tally in a Test against their trans-Tasman rivals.

As well as racking up a half-century and claiming the bonus point in an impressive start to their Rugby Championship campaign, the win marked a 22nd successive victory for New Zealand over the Wallabies at Eden Park – extending a winning streak which stretches back to 1986 .

Australia, who had needed a win to keep the annual three-match Cup series alive after their 33-25 defeat last week, saw Andrew Kellaway score twice and Tate McDermott go over on the back of some fine attacking rugby but were punished ruthlessly for their errors.

The Wallabies started well, tested the home side with aggressive tackling and a physical approach at breakdowns. Yet in the fourth minute, center Rieko Ioane snatched a pass between Noah Lolesio and Tom Banks out of the air and ran 80 meters to score.

Fly-half Lolesio atoned for his error soon after though with a pin-point cross-kick which found Kellaway for the winger to finish, making the score 7-5 after a frantic first eight minutes.

In the 14th minute, New Zealand produced a brilliant try from a Wallabies turnover which was finished by the giant lock Retallick. Try-scorer Ioane passed to his brother Akira who dummied to winger Reece, then cut in-field and linked with McKenzie for him to flick the ball on to Retallick who ran 20 meters to finish under the posts.

When Savea scored in the 33rd minute, again from a Wallabies error, New Zealand led 21-8. Lolesios attempted clearing kick skewed infield and fly-half Mounga ran the ball back, creating the attacking position from which the No 8 scored.

The Wallabies were now down 31-8 but rallied strongly with a try from scrum-half McDermott to cut the lead to six points at halftime.

Two minutes after the restart, the All Blacks found themselves under pressure when Savea was sent to the sin-bin. However, the visitors botched the line-out from the resulting penalty after kicking to touch and were punished by New Zealand.

Despite being temporarily down to 14 men, Taylor finished for his first and, a few minutes later, Damian McKenzie, with a rising wind at his back, kicked a 56-metre penalty to put the All Blacks ahead 31-15.

Reece scored New Zealand’s second try from a long-range interception, Taylor crossed for his second and winger Jordan touched down for his 10th try in only his sixth Test as the All Blacks scored four tries in 15 minutes to blow out their lead to 50- 15.

The Wallabies hit back, too late, with a second try from Kellaway, but New Zealand, never willing to relax, then finished with a flourish thanks to a try after the full-time siren from center Havili.