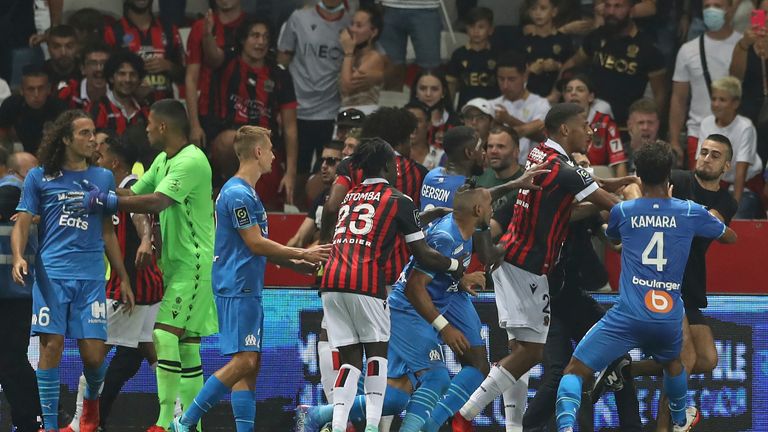 The match between Nice and Marseille which was abandoned last month due to crowd trouble will be replayed on October 27, France’s Ligue 1 said on Monday.

It is set to be played at a neutral location and Ligue 1 said the venue will be determined at a later date.

Nice were handed a two-point penalty, one of which is suspended, following fan violence during the game which was abandoned with 15 minutes left after home fans threw projectiles and invaded the pitch.

French Professional League (LFP) had ordered the club to play their next home game behind closed doors, pending the results of the probe.

The point deduction meant Nice had dropped to fifth place – one point behind Marseille in the standings, with six points from three games, but both teams won this weekend to move up to third and fourth.

Pablo Fernandez, a member of the Marseille staff who was involved in the scuffle, was suspended until June while Marseille player Alvaro Gonzalez was handed a two-game suspension.

During the game, Payet was hit by a bottle and fell to the ground. He got back up and threw it at home fans, prompting a significant number of Nice supporters to rush the pitch.

Blows were exchanged between players and staff members as security officials and riot police struggled to regain control.

Nice were leading 1-0 when the game was suspended for 90 minutes, with Marseille then refusing to come back out to finish the match.