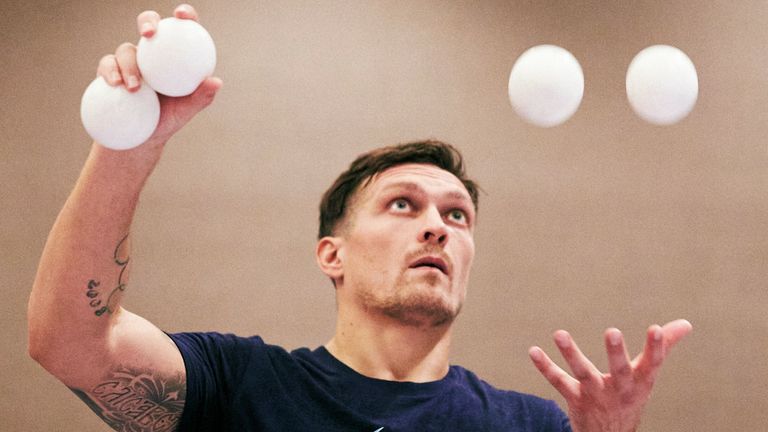 Mikael Lawal says Oleksandr Usyk is “like a ghost” when an opponent tries to land punches, but he gained the Ukrainian star’s respect after a sparring ‘war’.

Usyk will attempt to inflict a stunning defeat on Anthony Joshua in their world heavyweight title fight on September 25, live on Sky Sports Box Office.

Lawal, who returns a week later against Steven Ward on October 2, live on Sky Sports, had sparred Usyk ahead of a cruiserweight unification clash with Mairis Briedis in 2018.

“They got in contact with my manager, I think they must have heard of me somehow,” said Lawal. “I kept quite a bit of an eye on him. This guy is going to be a problem, that’s the first thing I said.

“I used to make little jokes – this guy is like a ghost!

“It went back and forth [in sparring]. He definitely respected me. The first day I went in to go sparring, he put me to spar him last. There’s like four different sparring partners there, and he put me last.

“Just like, ‘I’ll use him to warm down,’ kind of thing. I think after me and him sparred – I gave it to him a little bit, then the second time he put me in second.

“Obviously he thought he would get warmed up with the first guy, then me and him will go to war. That’s how he kept it after that. We just sparred and he loved it. That’s why he called me back again.”

Lawal became a preferred sparring partner for Usyk, telling Sky Sports: “I’ve gone back for two of his camps.

“A nice guy, a funny guy. He’s always making little jokes. He’s very down to earth, very humble. I was saying, ‘If I can mix it with the likes of him, I can definitely mix it with anyone.’

“Obviously sparring is different to fights. I’m not taking too much away, but at the same time, I’ve taken a lot from it.”

Usyk collected all the world titles at cruiserweight before stepping up a division to enforce a WBO mandatory title fight against Joshua at Tottenham Hotspur Stadium.

Lawal has continued to rise the rankings in Usyk’s former weight class and will face Ward in a final eliminator for a British cruiserweight title shot on the same bill as Chris Eubank at The SSE Arena, Wembley.

“It’s definitely something I’ve been waiting for all my life,” said Lawal. “I can’t wait to finally put on a show.

“I don’t think there’s any boxer that doesn’t think about getting that spectacular knockout finish but he’s definitely coming to fight.

“He’s not coming to lay down, so I need to make sure that anything he comes with, I’m just ready for it.”

Sky Sports and @BOXXER have announced an exciting new schedule of UK shows and you can purchase tickets from 10am on Thursday September 2.