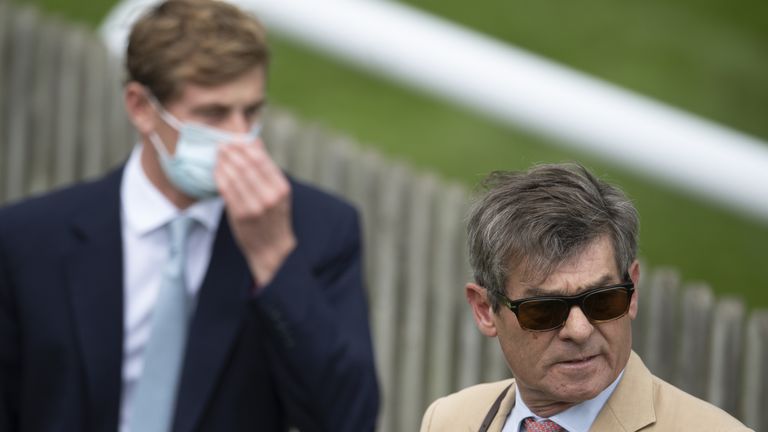 George Boughey is confident of prominent performances from both Oscula and Hellomydarlin in Deauville’s Prix Six Perfections – but cannot predict which of his two fillies will come out on top.

Boughey’s juveniles are owned by a division of Nick Bradley Racing – as is Mystery Angel, also part of the yard’s Tuesday team in France in a second Group Three on a classy card, the Prix de Psyche.

The Newmarket trainer expects all of them to cope in varying degrees with the forecast good to soft conditions, having proved adaptable on that score to date.

Oscula was significantly Hellomydarlin’s superior when they were respectively third and 12th in the Albany Stakes at Royal Ascot.

But there is only 2lb between them on official ratings, and Boughey corroborates that they have been each other’s equal on his gallops as they prepare to take on a field containing one other British challenger – Simon and Ed Crisford’s Daneh – and a home contingent headed by Andre Fabre’s unbeaten course-and-distance winner Zellie.

Oscula, winner of the Woodcote Stakes at Epsom in June, has followed her Royal Ascot effort with a very respectable fourth in the Group Two Duchess of Cambridge Stakes.

Boughey said: “The ground was too quick for her at Newmarket last time. It looks like there’s a bit of ease out there this time, which should suit her.

“She was third in the Albany on heavy, and then it was very soft ground on Oaks day when she won the Woodcote. She’s rated 100, goes there in good shape, so I think she has a good chance.”

Both fillies move up slightly in trip, having raced exclusively over six furlongs so far.

Boughey added: “Hellomydarlin steps up to seven, after her third in the Prix Robert Papin. Jockey reports and everything I’ve seen have always suggested she’d get seven.

“She’s a big, strong filly and goes there with a decent chance as well. The form of Hellomydarlin’s maiden actually got a massive boost the other day, with Ismael Mohammed’s (Zain Claudette) winning a Group Three.

“It didn’t work out for her at Ascot. We wanted her to come stands side, and she never got over to get in the race, and the ground was way too soft for her. I think you can put a complete line through that.”

She has twice run with credit since, notably in the Group Two Robert Papin at Chantilly last time.

“Her form at Pontefract was pretty good, and then she backed it up when she went to France the other day,” said Boughey. “So personally, I couldn’t split them. They worked together the other day, and they worked as well as each other.

“Obviously one will beat the other – but where they finish, I’m not sure.”

He said: “She won very well at Kempton, and we thought she deserved a chance in a stakes race. She’s obviously very well-bred as well, a homebred of Sheikh Rashid’s (Dalmook Al Maktoum).

“We were going to run her in a Listed race at Sandown the other day. But it was very firm ground, and she wouldn’t want that. So the ground looks suitable.

“It still looks a very punchy affair out there – but she’s in good form, and I think she’s come on again from her first run, so we’re expecting a good run from her. I think she deserves to be going in a stakes race, so we’ll see how she gets on and where we stand.”

“She’s flown the flag this year for us,” he said. “She won the Pretty Polly well (at Newmarket in May) on decent ground. She’s not actually run again on it, and she’d never run before on it, and I’ve always been of the view that she will be better on better ground.

“If it was only good to soft, that would be fine. It seems everywhere she goes the rain follows her. She’s in very good form – she’s been busy, but she takes her racing incredibly well.”

Mystery Angel drops to 10 furlongs, having sat out a possible Group Two alternative up at one mile six on Saturday at Goodwood.

“She’s not bred to get a mile and a quarter, a mile and a half – but I think because she’s so relaxed she’s able to,” said Boughey. “She was in the Lillie Langtry, but I didn’t see any reason to take on David Menuisier’s horse (Wonderful Tonight) on soft ground.

“I think she’s pretty versatile trip-wise. We’ll probably look to make plenty of use of her and get on the front. James Doyle will know that she stays a mile and a half well, and (can) be pretty positive on her. It felt like she deserved a Listed win, and she got that, so if we can go one step better that’d be great.”

Among her seven opponents are Irish challenger The Blue Brilliant, who moves up in class in search of her hat-trick for Jessica Harrington.