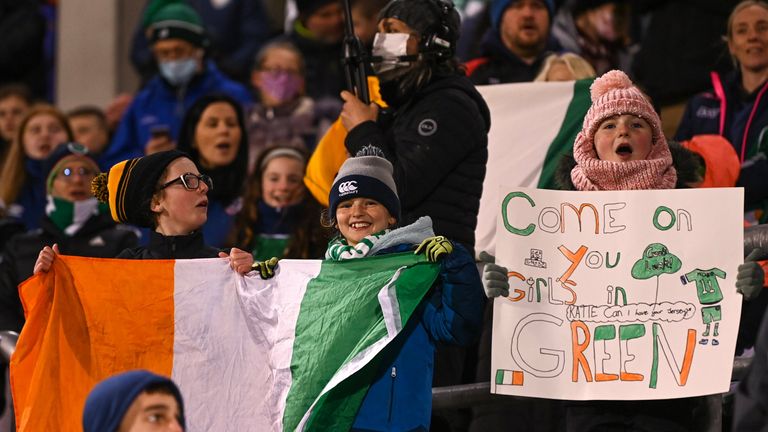 At kick-off, a 1-1 draw against Slovakia might have been deemed as two points dropped for the Republic of Ireland Women.

Vera Pauw’s team may still have been disappointed with the point at full-time, but they will also know they could have ended the evening empty-handed.

If they are to qualify for the 2023 World Cup in Australia and New Zealand, it was never likely to be all plain sailing throughout.

Despite the positive performance against Group A big guns Sweden in a 1-0 defeat, followed by a big away win over second seeds Finland, the Girls in Green were brought crashing back down to earth with a draw against a well-drilled Slovakian team at Tallaght Stadium on Thursday night.

A Martina Surnovska goal early in the second half gave the visitors a surprise lead, but it was canceled out by Katie McCabe.

Neither side could find a winner, in what was – on balance – an equitable sharing of the spoils.

Ireland enjoyed the better of the first half, with Denise O’Sullivan and Heather Payne leading the line and troubling the Slovakia defense with their pace.

McCabe provided an engine down the left, with the Arsenal star featuring in both defense and attack for the home side.

Although the visitors had two half-chances from Maria Mikolajova and Patricia Hmirova on the right-hand side, the Irish were able to soak up the majority of the Slovakia pressure. Louise Quinn provided a towering presence at the heart of the defense.

Ireland looked to move up a gear as the half wore on, and Lucy Quinn’s looping header in the 32nd minute almost found its way into the top corner. Nevertheless, they continued to push forward, with Quinn and Payne both coming close to a breakthrough before the referee signaled for half-time with the sides level at 0-0.

The hosts endured a nightmare start to the second half, however. L’udmila Mat’vakova found herself in space down the right wing, crossing to Martina Surnovska who managed to bundle it past Courtney Brosnan for the lead.

Ireland immediately looked to hit back, and Megan Connolly and Lucy Quinn both had fierce shots from outside the box.

The pressure eventually told, when the ball fell to Katie McCabe on the left, and the captain buried a low shot into the far corner, sending the home crowd into raptures.

Slovakia responded well. Alexandra Biroova had a headed effort well saved by Courtney Brosnan, before Quinn came to the rescue with a goal-line clearance after a mix-up in the Irish defense presented by Laura Zemberyova with a golden opportunity.

From there, both teams pushed for a winner, but neither could land the knockout blow.

A setback for the Republic of Ireland. A point gained for Slovakia. But there is a long road left to travel in Group A.

The Republic of Ireland host Georgia at Tallaght Stadium on Tuesday night, on the same evening Slovakia will travel to Sweden.

The Republic of Ireland WNT is sponsored by Sky Ireland. Believe.