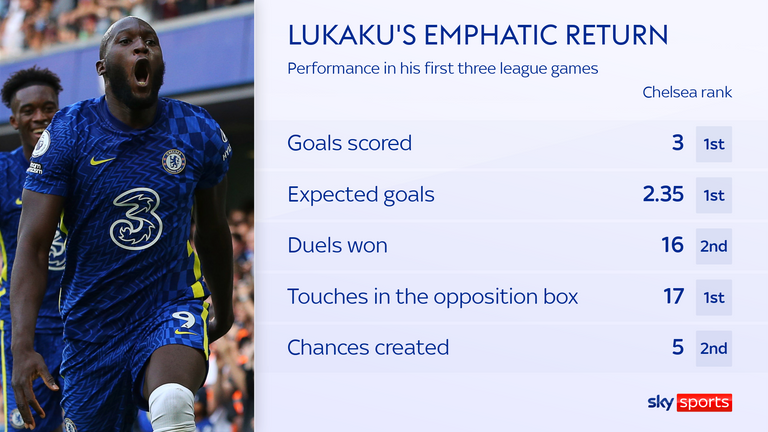 Romelu Lukaku has announced his return to Chelsea with four goals in as many games. How can Tottenham stop the Blues’ ‘main man’ adding another this weekend?

Lukaku was labeled the ‘complete striker’ by Sky Sports’ Graeme Souness following his double in a 3-0 win over Aston Villa last Saturday, and has hit the ground running on his Premier League return after netting 47 Serie A goals across the last two seasons with Inter Milan.

He’s looked the missing piece of the puzzle for Thomas Tuchel’s Champions League winners, who scored only 25 times in the German’s 19 league games in charge last season, and owed their improved results almost entirely to a shored-up backline which conceded just 15 goals in that time while keeping 11 clean sheets.

Lukaku’s arrival has provided a whole new headache for opposition managers. The 28-year-old is a nightmare in the box, is already exceeding his expected goals target and has won more duels than almost anyone else in his first three matches back – all while being one of Chelsea’s best creators, too. Tuchel himself has admitted the Blues had “missed” someone of his quality.

“He is goals,” said Souness. “You’ve got someone who can get you goals out of nothing. I think he’s near enough the complete striker – he’s not brilliant at anything, he’s very good at everything.”

Arsenal’s Pablo Mari was taken to the cleaners when trying to go toe-to-toe with Lukaku on his debut, but he is just as ready to punish defenders who give him space, as he showed with his fabulous touch and finish for Chelsea’s third against Villa.

Tottenham boss Nuno Espirito Santo has already got the better of one tough opposition in Manchester City this season – and now how does he go about keeping the big Belgian at bay when they go head to head on Sky Sports Premier League in #GameZero this weekend?

In his final season in Italy Lukaku blew away almost all comers, scoring 24 goals in 36 games, but three teams did manage to get a handle on Inter’s main attacking threat. Across games with Hellas Verona, Atalanta and Udinese the striker struggled to keep hold of the ball, managed only a single shot – and most importantly, did not score.

How did they do it? All three sides played with three-man backlines, allowing them to commit one player to deal specifically with the striker’s threat without becoming unbalanced at the back.

In contrast against Arsenal, who operated with a back four, Lukaku outmuscled Mari for Chelsea’s opener before dropping deeper for the second, where Granit Xhaka committed and failed to tackle him, opening space for Mason Mount to assist Reece James’ finish. The Gunners struggled to decide whose responsibility it was to deal with Lukaku, and paid the price.

Arsenal showed how not to defend against the Belgian in his Premier League return earlier this season.

Nuno is no stranger to playing with a back three, but this weekend in particular could find it a logistical headache; Japhet Tanganga is suspended, Eric Dier an injury doubt and Cristian Romero is stuck in Croatia quarantining until Saturday. However, there is already talk that the Argentine defender may feature, and he can draw on his own performance in that Atalanta clash in March, when his pace and awareness won him four of his five duels against Lukaku.

Get tight, cut off his options

Atalanta executed arguably the perfect defensive performance against Lukaku in that game at the San Siro. Milan Skriniar did score the winner with Inter’s only shot on target from a corner, but in open play their attacking threat was shackled more effectively than any other team managed last season – so Spurs may want to emulate their approach on Sunday.

Their secret was both personnel and tactic-driven. Berat Djimsiti was given the role of tracking Lukaku, who often dropped deep to collect the ball but was never given space or time with it. The 6ft 3ins Albanian defender tried to win the first ball each time but if he couldn’t, he made sure he got tight to his man.

That hassling and harrying played a major part in keeping Lukaku uncomfortable, and denied him time to pick out attacking options or turn and run at the Atalanta defence. He lost possession 26 times in that match, by far his highest tally of the season.

In terms of physical strength, that may be a role which lends itself to 6ft 4ins Joe Rodon, who is still shy of Premier League experience but stepped up after Dier’s injury against Crystal Palace last weekend, and won a higher percentage of his duels than any other Spurs defender last season.

Another tactical detail demanded keeping men around Lukaku and Djimsiti to counteract the threat from second balls. The forward created 52 chances for others last season, more than any other Inter player, so denying him the opportunity to use his strength as a target man to feed his team-mates was crucial.

When the ball was played into Lukaku, Atalanta players were aware of the threats posed by those around him, and their proactive defending denied him stopped him from creating a single chance for his team – a real rarity.

That was the approach taken by Udinese in their goalless draw with Inter as well. As shown above, with Kevin Bonifazi given the job of staying touch tight to the striker, midfielder Wallace was aware to reach this lay-off before Lautaro Martinez could receive the ball in what would have been a dangerous area. Pierre-Emile Hojbjerg, a tenacious operator and the Spurs player who made the most recoveries last season, could be perfect to fulfill the role.

If you can’t beat him, foul him

There are going to be times against a striker as talented as Lukaku, and a team as good as Chelsea, where you don’t manage to pin him perfectly, or track one of their many runners.

The dark arts can come into play then – in that game with Verona, another where Lukaku failed to register a single shot and completed only seven final-third passes, he was fouled five times, a season high. Four of those came from centre-back Giangiacomo Magnani, the defender tasked with stopping him by whatever means necessary.

Tactical fouls are no secret and especially against a player with the explosive power of Lukaku, can provide an important defensive relief. In his draw with Udinese, defender Samir was booked after noticing he was about to be turned by his man on the break, and hauled Lukaku to the ground. The alternative may have been a lot more painful than a yellow card.

Tottenham can rest relatively easy about Chelsea’s threat from set-pieces, too. Despite regularly having three big centre-backs on the pitch, they have scored only three goals from free-kicks since the start of last season.

Stay alert on the counter

Lukaku hasn’t got Adama Traore levels of pace, but he’s certainly no slouch. His speed matched with his strength offers Chelsea a dangerous option on the counter-attack, and Tottenham’s defense will need to be alert not to get caught on their heels from any balls in behind.

This is where Nuno will hope to have Romero available, as the Argentine can draw on his own performance against Lukaku for Atalanta last season for inspiration. At one point in the second half, Lukaku outmuscled Rafael Toloi to a ball forward and was left clean through on goal with a 15-yard start on Romero, but failed to get a shot away because of the pace of the defender’s recovery run.

That was one of two occasions in the game where Romero’s pace and quick thinking denied Lukaku when the striker appeared through on goal, an asset which could prove pivotal for Spurs if Chelsea look to go direct to their number nine at any point.

Whatever the personnel at Nuno’s disposal, they will have to be at their very best to stop Lukaku from continuing his sensational start since his return to Chelsea. Devising a game plan on the training pitch to stop him is one thing – implementing it on the pitch is quite another.