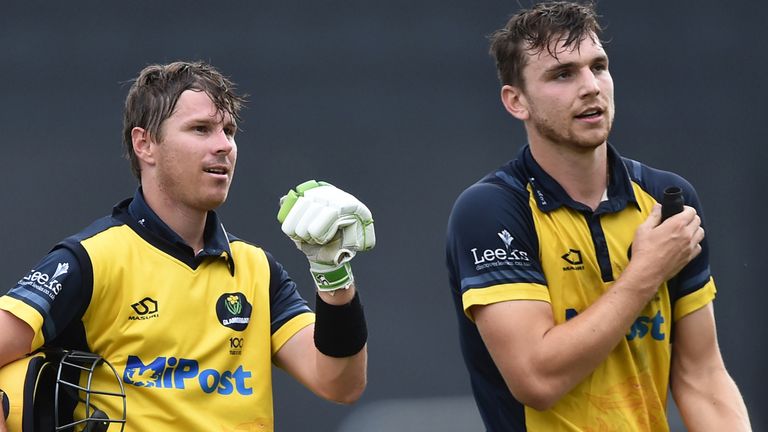 Glamorgan into first List A final since 2013 as Joe Cooke takes five wickets and scores unbeaten 66 in five-wicket win over Essex; Glamorgan will face Durham or Surrey in Thursday’s Sky Live final at Trent Bridge; Sir Alastair Cook hits half-century in losing cause for Essex

Glamorgan sealed a place in their first List A final since 2013 with a thrilling five-wicket Royal London Cup victory over Essex as Joe Cooke starred with bat and ball.

Cooke was the star of the show for the Welsh side on a belting Sophia Gardens wicket as he took 5-61 with the ball and guided Glamorgan home by striking an unbeaten 66.

While England’s batsmen fielded against India at Lord’s, former Test captain Alastair Cook top scored with 68 from 66 balls as Essex posted 289 all out from 49.4 overs.

Hamish Rutherford (67 off 44) and Nick Selman (59 off 80) impressed for the Welsh side in reply, but the game was won by a stunning, unbeaten stand of 111 between Cooke and Tom Cullen (41 not out) as the hosts got home in 48 overs.

Glamorgan will now face either Durham or Surrey – who play their semi-final on Tuesday – at Trent Bridge on Thursday, live on Sky Sports The Hundred.

Glamorgan chose to insert Essex so the last thing they would have wanted was a century stand for the first wicket from away openers Josh Rymell (44) and Cook.

Cook went to 50 from 49 balls thanks to a trademark off-side drive but was then stumped off a Steven Reingold wide.

Rymell was then caught off the bowling of Cooke, who also went on to remove Essex captain Tom Westley (31) and then Adam Wheater (16), Simon Hamer (21) and Aron Nijjar (2) later in the innings.

Paul Walter smashed 50 from 38 balls for Essex but the visitors would perhaps have hoped for a higher total having been 225-3 in the 40th over.

Glamorgan openers Rutherford and Selman then shared an opening partnership of 95 inside 14 overs, with Rutherford taking 22 off one Ben Allison over with four straight fours and then a six.

Cullen and Cooke started slowly but they ran well between the wickets to leave Glamorgan needing 67 runs from the final 10 overs.

Cooke went to a run-a-ball 50 and when he and Cullen took Jack Plom’s 47th over for 16 runs, there was only ever going to be one winner and Cooke sealed victory with a six.