Just Beautiful provided Ivan Furtado with the biggest win of his career to date when running out a game victor of the Japan Racing Association Sceptre Fillies’ Stakes at Doncaster.

Already a Listed winner at Musselburgh in June, she defined market expectations to finish a close sixth to Snow Lantern in the Falmouth Stakes.

Beaten in France last time out, she was sent off the 11-4 favorite in the Group Three contest with the assistance of former champion jockey Silvestre de Sousa.

De Sousa was keen not to allow Highfield Princess an easy lead and after a couple of furlongs held a clear advantage.

By halfway De Sousa decided it was time to kick on and went a couple of lengths clear, seeing off Highfield Princess but with Double Or Bubble closing.

The younger filly just had enough in reserve to see off the attentions of Double Or Bubble, though, winning by a head with Loch Lein running on for third, sparking great celebrations for her locally-based owners.

Furtado, who is based not too far from Town Moor down the A1 at Newark, said: “That was unbelievable. She’s some filly to do what she has – she’s won five out of seven, and second in a Group Three.

“She’s straightforward, and it’s great for the owners and staff at home. It’s fantastic for a small yard like ours.

“She was always a great mover, and we always liked her. But she had the handbrake on (at home) for quite a long time – she started to properly come to herself about September time (last year).

“We didn’t rush her. We always knew that she had something there – then from September time, we thought we had something special, and fortunately we did.

“She’s in at Newmarket for the Sun Chariot. But she’s done unbelievably well, and we’ll just see about the ground from now on.” 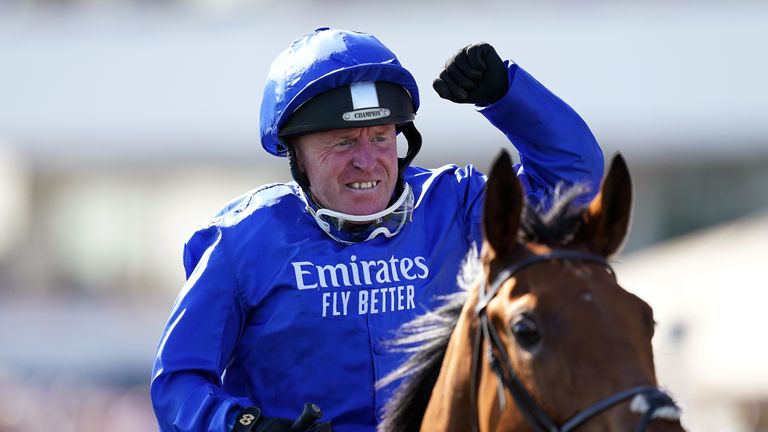 Gary Bardwell was lost for words after finally winning the Leger Legends charity race at Doncaster at the tenth attempt, giving the jockey his first victory since February 2003.

He added: “Whether she stays in training next year or goes to the broodmare sales is a question mark.

“But if the ground stays right, we will probably go to Newmarket – if not she’s probably done her job now.

“To have a filly like her is great, and it will probably be hard to find another one like her.

“I just hope it helps the team, and proves if we’ve got the right tools we can do the job.”

Watch the final British Classic of the season, the Doncaster St Leger, live on Sky Sports Racing on Saturday, September 11 at 3.35pm.

Of his background in the sport, Furtado said: “My grandparents and parents are cattle farmers in Brazil. I grew up riding horses, and very much as an amateur when I was about 14.

“But I was going to be too big to be a jockey. My granddad owned a few racehorses, and I went to do a business degree, had another job and didn’t enjoy it.

“I came to England for a bit of adventure, and my first trainer was Jim Old – he gave me a job, and I went from there. I was bitten by the bug, and I love it. Days like today make it all pay off.

“We’ve done unbelievably well, for (just) six years. We started with six horses – and we’ve got about 60 in the yard now. We have everything (we need at the yard). We just need the right horse , and we can deliver.

“I grew up as a farmer outside, and I can’t go inside (to work) any more now.”