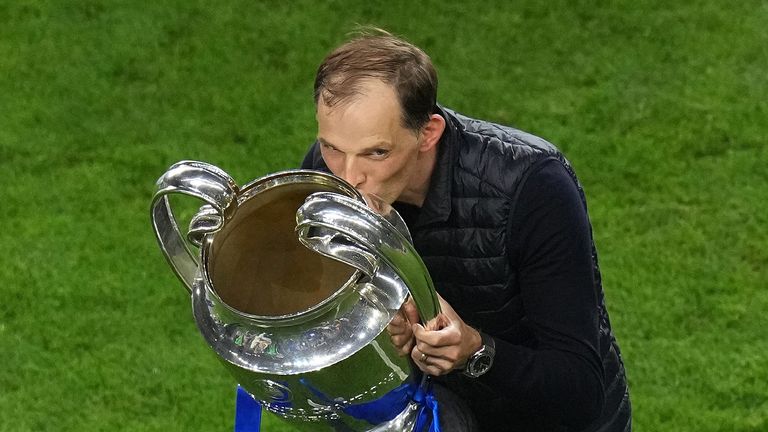 Thomas Tuchel is a coach so intent on looking forward rather than luxuriating that Chelsea’s Champions League triumph remains a mere series of snapshots, a brilliant blur.

“I still haven’t watched the 90 minutes back yet!” he laughs. “It was necessary to process it a little bit. I watched bits of it with friends back in Paris – just highlights to regain a bit of feeling – and when I went to Germany to see my grandmother and my parents, everyone was speaking about it.

“Seeing how happy my friends, my family, friends of the family were about it made me happy.

“But I’m not the guy who looks back too much.”

Tuchel’s Chelsea legend is already secure after a half-season wonder during which he outmanoeuvred Manchester City to deliver only the club’s second Champions League title, secured a top-four Premier League finish with a side he found slumped in mid-table and transformed a team in the mind as well as on the training pitch.

But here, firmly back “in the present” and further fueled by an extended contract as well as his family’s arrival in London, his focus is on sustained success at Stamford Bridge as he speaks to Sky Sports in the days before the Blues’ 2021/22 season opener against Crystal Palace.

“Nobody will take the Champions League away from us but I think it’s enough time now that everyone has let it sink in. Now it’s the moment to show it again.

“We have this experience now of winning the Champions League but don’t overthink it, don’t get lost in a theoretical approach about the next step. Let’s just value the possibility of stepping up again.”

Tuchel is just getting started as he gears up for his first full season in charge in west London and so, it seems, are his players. On the morning the German meets the media to preview the new campaign, defender Ben Chilwell is delivering his own statement of intent.

“Our focus and our aim is to win the league this season,” he tells Sky Sports. “Winning the Champions League gives us more confidence to win more silverware and also the hunger; once you’ve had that feeling of winning a trophy, it makes you want it again.” 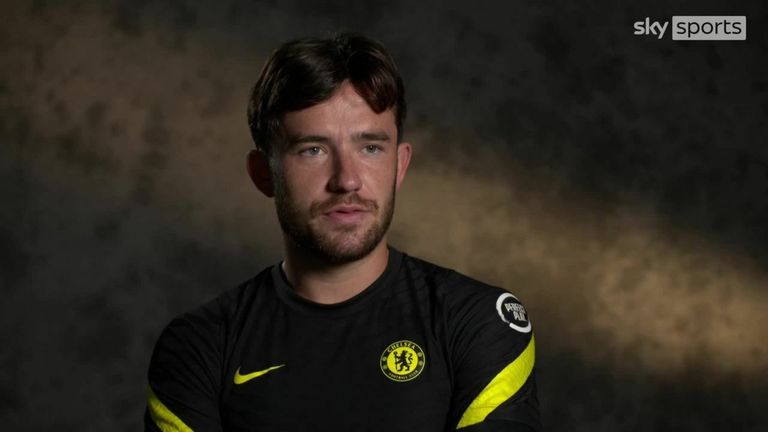 They secured the Super Cup after a penalty shootout win against Villarreal, Tuchel’s inspired decision to send on Kepa Arrizabalaga for the spot-kicks further evidence of his sharp psychological as well as tactical instincts, but the focus now is flexing their muscles on the home front.

Pre-season was “challenging” with a trip to Dublin truncated by a coronavirus scare and his internationals returning to Cobham late following Euro 2020, but Tuchel says he has been taken aback by the intensity of fitness sessions, even if he admits optimum levels for some could still be a few weeks away.

“It’s been quite a unique preparation, pretty challenging. Some of the players have had only one week of training; they’ll need to continue – they will be at their peak probably in September but this is something we have to adapt to.

“There have been double sessions to give everyone the exact workload they need but the physical department has been outstanding and the players have been fantastic in terms of work ethic. They have worked really hard – it’s been on a level I haven’t experienced before ; everyone is taking it so seriously.”

Jadon Sancho and Jack Grealish – for a British transfer record – have arrived at Manchester United and Manchester City respectively and Ole Gunnar Solskjaer has declared himself braced for one of the “strongest Premier League seasons” yet.

Tuchel is wary of the impetus returning fans will give some less-fancied sides: “It will be a huge reward to play in front of fans – I can imagine teams who will be underdogs will make things more difficult for us and it’s more difficult in coaching because the players don’t hear it. We all have to be on our top level.”

But he has been determined to bolster his own squad in response to what he admits are “big signings going on” elsewhere.

Last summer prompted a squad overhaul that cost more than £200m, but this window’s search has centered on one type of reinforcement: an elite striker to decide moments and margins.

A tactical shift had shored up a side leaky under Frank Lampard and mentally fragile – the Blues recorded 18 clean sheets in all competitions after Tuchel’s January arrival – and yet at the other end of the pitch, so many big chances were still squandered, so many promising positions in vain.

Only six teams had a lower shot conversion rate than Chelsea last term and three of those sides were relegated; only four sides had a poorer return on expected goals data. In April, Tuchel said bluntly that his forwards’ return was “clearly not enough for the demands, the expectations and the targets Chelsea football club has.” Jorginho would finish their leading league goalscorer on just seven.

Tuchel would not be drawn on Lukaku’s impending return, a decade on, in his press conference to preview the Villarreal clash but he did tell Sky Sports that the Belgian was the kind of “real No. 9” he believes can galvanise his attack. 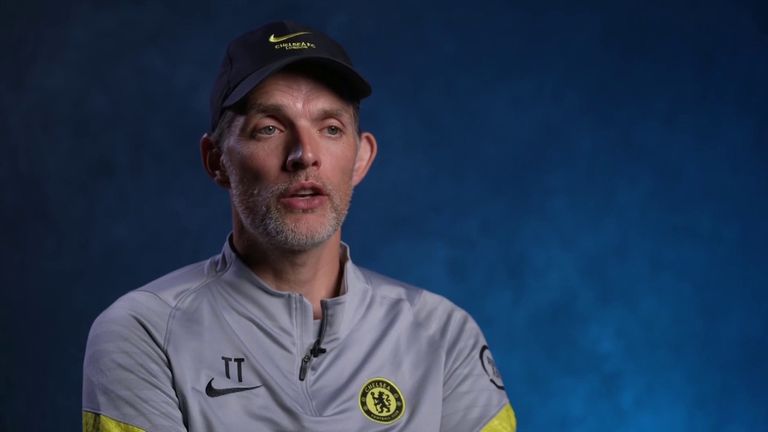 “We lost Olivier Giroud, who played a role at the club – his goal against Atletico Madrid was decisive in our Champions League campaign – and he was the kind of profile who likes to play with his back to goal, who likes to hold up balls, who creates space for Timo Werner, Kai Havertz, Christian Pulisic; who is ready to fight physically with defenders.

“Romelu is one of the guys like [Erling] Haaland at Dortmund, [Robert] Lewandowski at Bayern, Harry Kane at Tottenham, who is a real No. 9 who loves to score and who has a presence in the box.”

His imminent arrival may prompt a tweak in offensive shape given Werner’s success playing alongside a fellow striker at RB Leipzig. While Lukaku scored 24 goals to help Inter to the Serie A title, he was involved in 11 more too, his fruitful link-up play with Lautaro Martinez and Andrea Belotti another sign of his evolving all-round game. 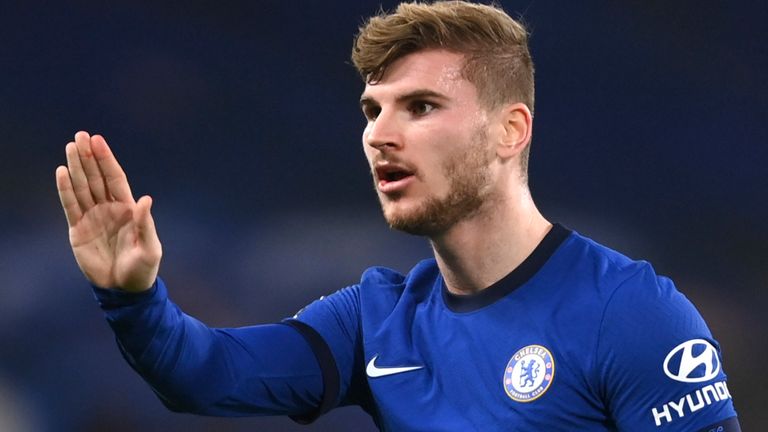 The prospect of further freedom to exploit space as Lukaku harries and drags opponents excites Werner – who converted just a fifth of his clear-cut chances last term – as well as his boss. “At Leipzig, it helped to have a striker alongside me,” he admitted. “It’s a good new weapon to have in our game, to know that he will hold a ball up and the fast players around him can set off.

But Tuchel is determined to also look within as he seeks improvements to give Chelsea the edge.

“At the same time, we’re giving all our energy to the guys that we have. We have a lot of confidence in what we have. One of the big targets is to get better with this group, to improve them.

“A lot of work has gone on to make people aware of these things; how do we improve the possibility and probability?

“Maybe it’s also sometimes a question of experience as well as composure. Maybe a second year in the Premier League for Kai and Timo… adapting and everything being new will not be such a huge point.

“I’m confident. But it’s a mix of everything. I don’t think out there exists any shooting drills that will solve the problem. If they did, we’d do them day in, day out!

“It’s a complex game and there is room to improve us in terms of scoring but I think experience will help.”

The experience of beating City three times last term across all competitions has also injected confidence but the challenge is consistency; making five transformative months count across 10.

Tuchel, always looking forward not back, believes his side are ready to mount a sustained title challenge.

“The last half-year, we tried to close gaps to Liverpool, to Man City, to Man Utd and now we need to try and do this from the first day.

“Can we predict what others do? No. But we have set the standards very high for ourselves so we have to reproduce them. That will be our approach.

“City have shown what it takes to be champions, Liverpool have shown it – consistency at the highest level in the most difficult league in the world.

“This is the benchmark. We’re not hiding behind what we demand of ourselves. We accept it will be tough but we have proved that we are capable of doing it. We’re here to close the gap not only for the half- year, but for the whole year.” 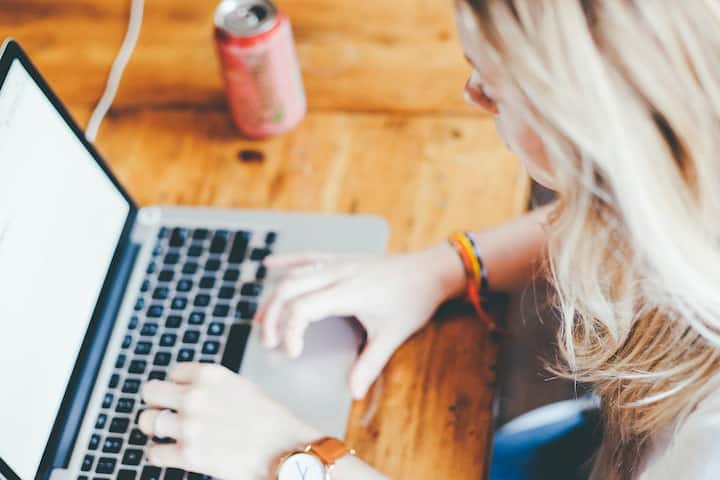