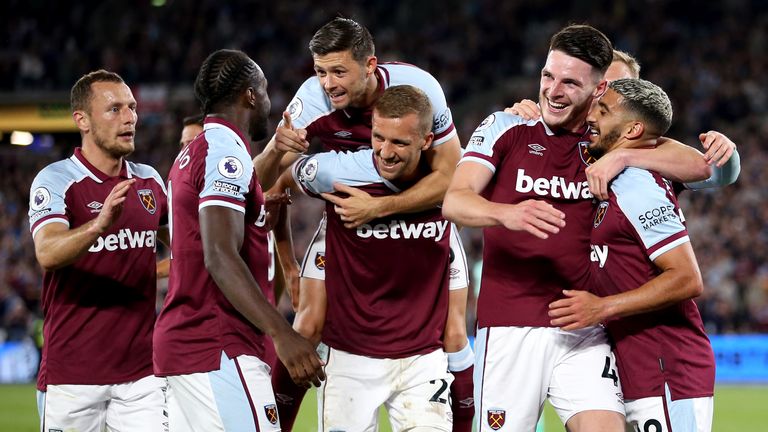 The Hammers outfought their visitors from start to finish and pounced on a poor pass to open the scoring when Pablo Fornals finished off a one-two with Said Benrahma for a classy opener.

The Argentine was left on the floor minutes before half-time by Ayoze Perez and after a VAR review noticed a stamp from the Foxes man on Fornals’ shin, Michael Oliver showed him a straight red card.

Leicester made their own task harder when Caglar Soyuncu’s blind backpass was picked off by Antonio, who teed up Benrahma to fire in from 18 yards.

The newly-crowned Hammers No 9 would then take center stage for himself late on to become the club’s record Premier League scorer, first holding off Soyuncu to power home his 48th league goal for the club, breaking Paulo Di Canio’s record.

And he moved within one of his half century four minutes later, taking one touch from Vladimir Coufal’s cross to take the ball away from his man, and beating Kasper Schmeichel with a second.

West Ham now lead an embryonic Premier League table on goals scored by virtue of their comprehensive victory, while Leicester are left to lick their wounds on the back of a painful defeat in the capital.

West Ham were the only team to do the double over Leicester in 2020/21 and once again frustrated the Foxes’ impressive forward armoury from the off, while looking dangerous themselves on the break.

Their direct approach nearly paid off several times early on at the end of patient but impotent Leicester attacks, but it was a move of the kind their visitors have become known which would bring them the first goal.

A loose ball from Jamie Vardy was picked off by Declan Rice on the half-way line and three passes later, was in the back of the Leicester net. Fornals started and finished the move, finding Benrahma on the left before stroking his low cross exquisitely into the far corner.

The Foxes were dealt a worse blow before the break when Perez’s stamp on Fornals, missed by referee Michael Oliver, was picked up by VAR and after a brief glance at the review monitor, the official reached for his back pocket.

Leicester were incensed. Kasper Schmeichel was still arguing the decision when the sides disappeared at the interval but had some similarly choice words for one of his own team-mates soon after they re-emerged, when Soyuncu’s awful back-pass put him in no man’s land and left Antonio to roll the loose ball across and give Benrahma a simple finish.

It was time for the Hammers’ main man to add the goals his performance deserved. Ten minutes from time he controlled Rice’s pass, outmuscled Soyuncu and lashed past Schmeichel to break Di Canio’s long-standing record, before moving further beyond it when firing Coufal’s cross in to round off a stunning night, one where the Hammers ended top of the Premier League for only the second time in history.

West Ham are back at the London Stadium on Saturday to host Crystal Palace in a London derby; Kick-off at 3pm.

Leicester face a long trip to Norfolk to face Norwich in their next Premier League game on Saturday; Kick-off at 3pm.