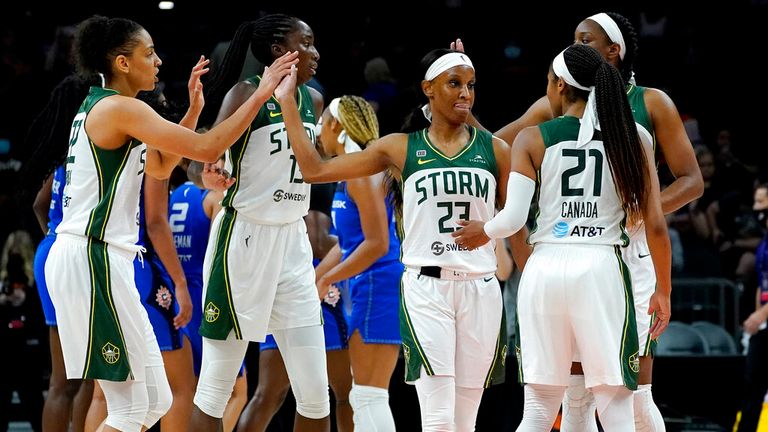 Breanna Stewart scored 15 of her 17 points in the first quarter as the Seattle Storm routed the Connecticut Sun 79-57 to win the inaugural WNBA Commissioner’s Cup.

Jewell Loyd added 16 points for Seattle and Sue Bird scored 10 while dishing out five assists. The Storm canned 49.2 percent of their field goal attempts and forced 20 turnovers in earning $30,000 per player for the victory.

DeWanna Bonner scored 11 points to pace Connecticut and Jonquel Jones chipped in a 10-point, 11-rebound double-double. Their efforts weren’t enough to prevent the Sun from settling for the loser’s share of $10,000 per player.

Both teams earned spots in the championship game, which put up a total of $500,000 in prize money, by posting the best record in Commissioner’s Cup games.

Brionna Jones’ free throw pulled the Sun within 32-27 with 4:50 left in the half, but the Storm never let the game get closer. Bird sank a 3-pointer with 2.3 seconds remaining, making it 46-35 at intermission.

Any hopes Connecticut had of a rally ended quickly. Seattle ripped off eight straight points to open the third quarter, Loyd finishing the run with a layup at the 6:21 mark for a 54-35 cushion. Kennedy Burke’s driving layup increased the advantage to 68-40 after three.

Storm pushed the margin to 31 on a couple of occasions in the fourth quarter before the Sun made things more respectable with an 11-2 run to end the game.

Stewart was named the game’s Most Valuable Player, earning her an extra $5,000.

The rest of the WNBA will resume the regular season on Sunday, with all 12 teams in action.