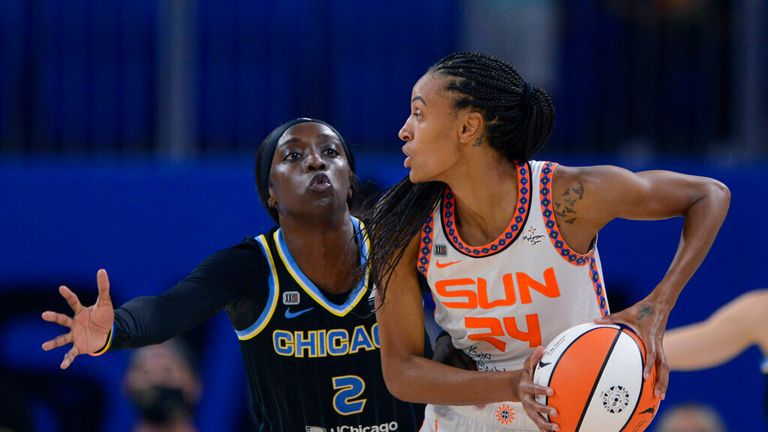 Kahleah Copper had a playoff career-high 26 points as the sixth-seeded Chicago Sky outlasted the top-seeded Connecticut Sun 86-83 in Game 3 on Sunday, taking a 2-1 lead in their best-of-five semi-finals series .

Connecticut used a 21-9 fourth-quarter surge to secure a 79-68 win in Game 2 on Thursday to even the series after Chicago’s 101-95 double overtime victory in Game 1.

Chicago led 37-35 after a back-and-forth opening half. Neither side was able to pull away in a close third quarter that saw Connecticut emerge with a 63-60 advantage after Natisha Hiedeman’s three-pointer with 6.3 seconds on the clock.

Thomas’ one-handed jumper brought within Connecticut within 82-81 with 1:09 to play.

After a timeout, Vandersloot sank a jumper from the top of the key to put Chicago ahead 84-81 with 52.9 seconds left.

January’s two free throws with 42.8 seconds on the clock again made it a one-point game at 84-83. After a Sky turnover, Thomas missed a contested jumper with 18 seconds to go and fouled Parker.

Quigley’s ensuing turnover led to a January breakaway, but she missed the layup with 8.2 on the clock. Vandersloot made one of two free throws after an intentional foul before both Alyssa Thomas and Jasmine Thomas missed potential tying layups with under three seconds remaining.

Mercury smash Aces to go 2-1 up

Brianna Turner and Brittney Griner each had a double-double as the host Phoenix Mercury routed the Las Vegas Aces 87-60.

Turner had 23 points and 17 rebounds, while Griner had 18 points and 11 boards as the fifth-seeded Mercury won their second straight game against the second-seeded Aces. 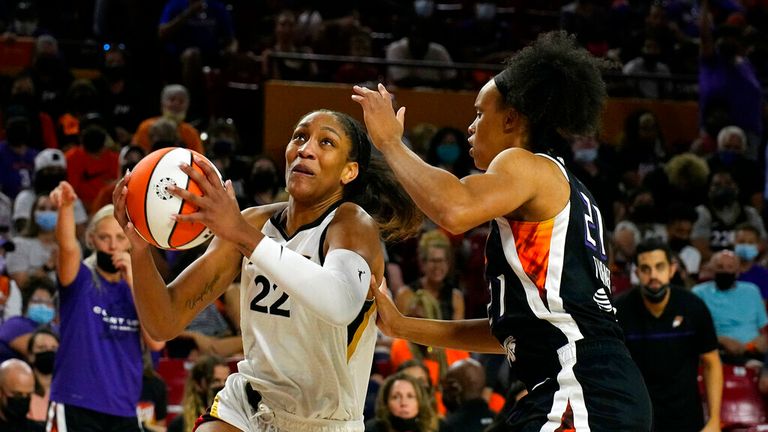 Shey Peddy came off the bench to add 10 points for Phoenix, who will host Game 4 on Thursday night live on Sky Sports Main Event, Arena and Mix.

Liz Cambage scored 13 points and Dearica Hamby added 10 off the bench to lead the Aces, who started slowly for the third straight game in the series. Las Vegas shot just 30.9 per cent from the floor and were outrebounded 58-29.

Kia Nurse started the third-quarter scoring with a three-pointer and Griner added a basket that gave the Mercury a 51-31 lead.

The closest the Aces could get in the quarter was 16 points before Peddy’s buzzer-beating basket gave Phoenix 72-52 lead at the end of the period.

Peddy’s four-point play completed a 7-0 run to start the fourth quarter that put the Mercury in command with a 27-point lead.

Diana Taurasi, who had a career playoff-high 37 points in Game 2, finished with just nine points, but she picked up where she left off Thursday night by making two three-pointers as Phoenix took an 11-0 lead.

Hamby ended the run with consecutive baskets before the Mercury regained an 11-point lead at 24-13 on a basket by Peddy.

Cambage made a three-pointer to pull Vegas within 26-19 at the end of the period. Riquna Williams’ basket started the second-quarter scoring and got the Aces within five points before Turner scored six during an 11-0 run that gave the Mercury a 46-27 lead.

Chelsea Gray’s jumper trimmed the Phoenix lead to 46-31 at half-time.