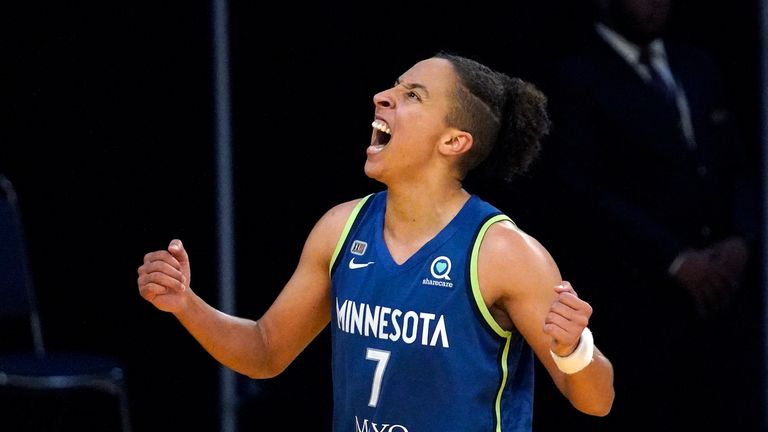 Skylar Diggins-Smith scored a game-high 25 points to lead the Phoenix Mercury to an 84-69 win on the road over the Atlanta Dream.

Meanwhile, Layshia Clarendon led the Minnesota Lynx as they rebounded from a two-game losing run with their 101-95 defeat of the host Chicago Sky on Saturday night.

Diggins-Smith’s productivity means that the Mercury (13-10) secured their fourth straight win and condemned the Dream to an eighth loss in a row (6-17).

Due to an uncharacteristic 22 turnovers, the Mercury allowed the Dream to stick with them through the first three quarters and took just a 60-57 lead into the final stanza. They then overpowered the Dream in the fourth quarter though, with Phoenix outscoring Atlanta 24-12 to cruise to the win.

Diggins-Smith also pulled down six boards for the Mercury, who outrebounded the Dream 47-24. Brittney Griner had 13 points, 12 rebounds and five assists, while Diana Taurasi (18 points) and Brianna Turner (15 points) each had 10 rebounds.

The Dream had four other players score in double figures. Odyssey Sims led the way with 16 points, Monique Billings had 15, and Aari McDonald and Crystal Bradford each put up 13 points. Courtney Williams led the rebounding effort with seven.

It was a combination of shooting below par and the lack of second-chance opportunities that doomed the Dream. They shot 40.3 per cent from the floor and 23.8 per cent from 3-point range but grabbed only six offensive boards, compared to 37 defensive rebounds for the Mercury.

The Mercury had 10 offensive rebounds but were hot at their end of the court, making 52.6 per cent of their shot attempts, including 47.4 per cent from long distance.

The three-point deficit the Dream had to begin the fourth quarter was the closest Atlanta would get the rest of the game.

Layshia Clarendon led six players scoring in double figures with 18 points, and the Minnesota Lynx rebounded from a two-game losing run with their 101-95 defeat of hosts Chicago Sky.

Minnesota (14-9) countered 27 points apiece from Courtney Vandersloot and Allie Quigley with a balanced scoring attack, which included 16 and 10 points off the bench from Crystal Dangerfield and Aerial Powers, respectively.

Powers added a critical offensive rebound with 1:16 remaining that led to a Sylvia Fowles basket. The sequence effectively erased the Sky’s comeback efforts, pushing the Lynx lead from six points to eight in the final minute.

Four of the five Lynx starters recorded at least 14 points, including 15 from Fowles. She took advantage of a thin Chicago frontcourt, with Candace Parker sidelined due to an ankle injury, shooting 6-of-9 from the floor before fouling out.

Parker’s absence also loomed on the glass for Chicago (11-12), where the Sky gave up a 33-23 rebounding disparity. Kayla McBride, who scored 16 points for the Lynx, and Damiris Dantas led the way with seven rebounds each.

Minnesota charged ahead early and built a 13-point lead in the second quarter, but Chicago closed the half on a 10-1 run. The Sky remained in striking distance throughout the second half behind Vandersloot and Quigley, with Kahleah Copper and Stefanie Dolson adding 14 and 12 points, respectively.

Chicago cut the gap to as few as a point late in the third quarter, but never rebounded from an 8-1 Minnesota run that began in the late third and extended into the early fourth period.