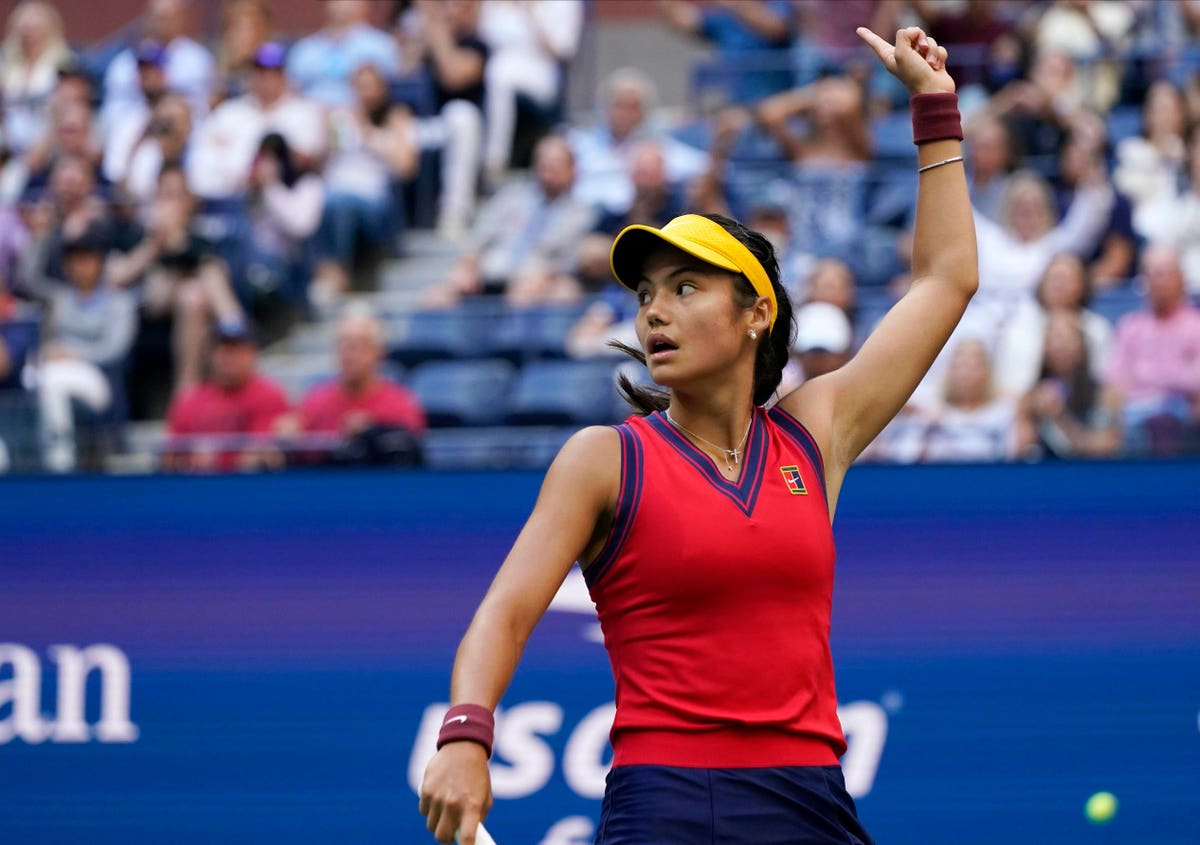 When 18-year-old Emma Raducanu first came to New York about three weeks ago, she booked her flights home to Great Britain for after the U.S. Open qualifying tournament.

“I didn’t expect to be here at all,” she said. “I mean, I think my flights were booked at the end of qualifying, so it’s a nice problem to have.”

Raducanu, ranked No. 150 in the world, completed arguably the most improbable and captivating run ever in a Grand Slam tournament when she beat 19-year-old Leylah Annie Fernandez, 6-4, 6-3, to win the U.S. Open Saturday in a packed Arthur Ashe Stadium on the 20th anniversary of 9/11.

In something out of a fairytale, Raducanu won 10 straight matches in New York — including three in qualifying — without dropping a set. It was the first all-teenage women’s final since Serena Williams beat Martina Hingis in 1999.

“Most of all I will say thank you to everyone here in New York,” she said on court. “Thank you for making me feel so at home from my first qualifyijng match all the though too the final. You really inspired me and I hope that me and Leylah put on a good performance today.”

Raducanu, who was born in Toronto to a Romanian father and Chinese mother, will take home $2.5 million for winning the title, while Fernandez earned $1.25 million.

Their combined age of 37 is also less than the ages of several of the most sports stars on the planet, including Tom Brady (44), Roger Federer (40) and Serena Williams (soon-to-be-40).

In the first set, Fernandez struggled with a serve that had helped her beat three top-5 players — defending champion and No. 3 Naomi Osaka, No. 5 Elina Svitolina and No. 2 Aryna Sabalenka in addition to three-time major champion Angelique Kerber — en route to the final. Raducanu, meantime, was able to control play from the baseline for much of the set with a wicked forehand and deep double-handed backhands.

After the duo traded breaks early in the set, Raducanu broke Fernandez again at 4-5 with a vicious forehand winner down the line to take the set.

Fernandez may have been more worn down coming into the final after winning four straight three-set matches, while Raducanu lost a total of 27 games entering the final.

Fernandez left the court briefly after the set and then earned a quick break for 2-1 in the second. But Raducanu quickly got the break back with a backhand return winner on break point to make it 2-all.

After holding, she seized a 4-2 lead with a forehand passing shot, and then clenched her fist as the crowd erupted. She confidently held serve with a service winner for 5-2 and was within one game of the title.

Fernandez saved two match points on her serve and held for 3-5 as the crowd cheered for more.

Serving a 5-3, 30-30, Raducanu drew blood from her left knee after scraping it on the court during a long rally and after losing the point, took a medical timeout to get a bandage.

But it didn’t hamper her play and she arrived at her third match point. She served an ace and then collapsed to the court on her back before hugging Fernandez on her side.

“Leylah’s always going to play great tennis and always going to fight, that’s just the competitor she is and that’s why she’s here in the finals,” Raducanu said. “I was just praying not for a double fault [after the medical timeout] but we got through it. I think just staying in the moment and focusing. My process and mindset really helped in the tough match.”

Raducanu is only 18 and has a wide-open road ahead, but it will be interesting to see how her career unfolds from here.

A number of recent Grand Slam champions were one-and-done and haven’t been able to win a second one, including Jelena Ostapenko, Sloane Stephens, Sofia Kenin, Iga Swiatek and Sofia Kenin.

“I think it shows that the future of women’s tennis and the depth of the women’s game is so great,” Raducanu said. “Every single player in the women’s draw has a shot to win the tournament. Let’s hope the next generation can follow in the footsteps of some of the legends, like Billie Jean King.”

The future is bright for Fernandez, too, after she proved she has no fear on the biggest of stages and can take down established players. She also continued to have the support of a raucous Canadian contingent including Brooklyn Nets coach Steve Nash, a fellow Canadian who sat in her player box yet again.

“Emma played amazing so congratulation to Emma and your team,” Fernandez said. “I’m very proud of the way I played these last two weeks and the New York crowd is amazing. Having you cheer me on, thank you so much, New York.”

She added: “I hope to be back here in the finals and this time with the trophy…with the right trophy.”

She concluded with “I just hope I can be as strong and as resilient as New York has been the past 20 years. Thank you for having my back and I hope to see you next year.”