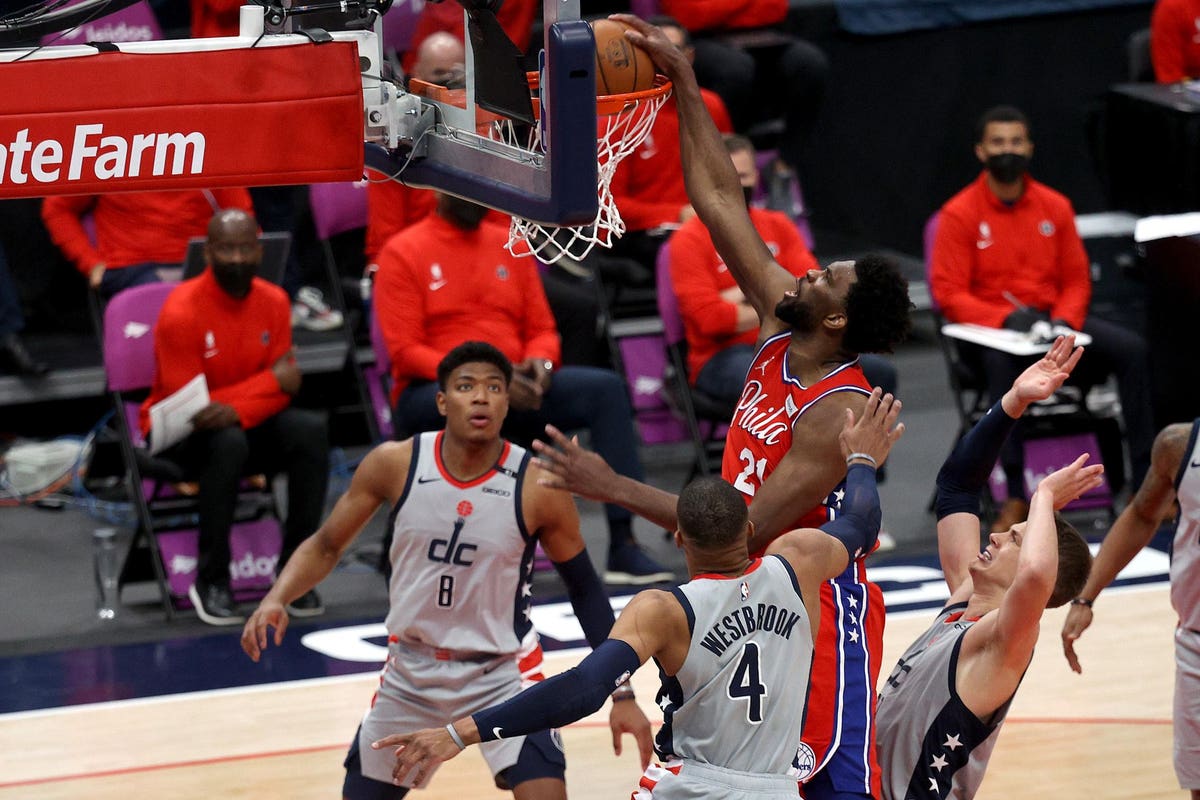 The Philadelphia 76ers have a date with the Washington Wizards in the first round of the 2021 NBA playoffs.

The Wizards clinched the No. 8 seed in the Eastern Conference with their 142-115 victory over the Pacers on Thursday night in the win-or-go-home game of the NBA’s new play-in tournament. They’ll now have two days to recover and game-plan before tipping off their first-round series Sunday at 1 p.m. ET.

The Sixers won all three of their regular-season meetings against the Wizards this year, but two of the three games were closely contested. They eked out a six-point win in the season opener and survived a 60-point onslaught from Bradley Beal two weeks later before blowing the Wizards out in mid-March.

As long as they stay healthy, the Sixers will be clear favorites in this series. They’re favored by seven points in Game 1, according to FanDuel Sportsbook, which trails only the Brooklyn Nets (minus-8) among all playoff teams.

The following three factors will likely determine who emerges from this matchup to face either the Atlanta Hawks or New York Knicks in the Eastern Conference Semifinals.

The Sixers’ defensive strategy changed against Beal throughout the season.

In the season opener, Danny Green and Shake Milton largely shared Beal as their primary defensive assignment, while Ben Simmons primarily occupied himself with Russell Westbrook. Second-year wing Matisse Thybulle played all of 17 seconds in that game, so he was a non-factor.

During Beal’s 60-point outing, Green again drew the main assignment against Beal, but Thybulle took over the assignment from Milton. Whereas Beal shot 8-of-14 with Green as his primary defender and 6-of-9 against Joel Embiid, he was only 2-of-6 against Thybulle.

In their final regular-season meeting, the Sixers didn’t take any chances with Beal. With Simmons sidelined, Thybulle started in his place and spent far more time than any of his teammates defending Beal. While the three-time All-Star finished an efficient 8-of-13 from the floor, he scored only 19 points and was a minus-16 before head coach Scott Brooks waved the white flag amidst a Sixers rout.

If the Sixers stick with their regular starting five, Green figures to start off on Beal and Simmons will take Westbrook. But the Sixers may need to turn to Thybulle’s smothering defense if Beal starts to catch fire, which makes him one of the X-factors of the series.

Can the Wizards stop Joel Embiid?

While Beal poses a matchup problem for the Sixers—even at far less than 100 percent—the same is true with Embiid and the Wizards.

Embiid left their final regular-season meeting after only 20 minutes, as he suffered a scary-looking knee injury following his attempt to dunk Garrison Mathews into an early retirement. Before exiting, he had already racked up 23 points on 8-of-11 shooting, seven rebounds, three assists, two blocks and a three-pointer.

The Wizards didn’t have much more success slowing him down in their other two opportunities, either. Embiid finished the season opener with 29 points on 10-of-17 shooting and 14 rebounds, and he countered Beal’s 60-pointer with 38 points on 11-of-20 shooting, eight rebounds, five assists, three steals and three blocks in 37 minutes.

The Wizards did bring in Daniel Gafford at the trade deadline, who will give them an extra six fouls to throw at the MVP finalist if nothing else. But none of Gafford, Robin Lopez or Alex Len stand much of a chance against Embiid one-on-one, which likely means Washington will need to send frequent help and be crisp on its ensuing defensive rotations.

If Embiid can pick apart the Wizards’ defense as a scorer and/or a passer, the Sixers shouldn’t have much trouble putting them away quickly.

Who shows up, Good Russ or Bad Russ?

As the Wizards stumbled out to a 6-17 start this season, Westbrook struggled to adapt to his new surroundings. He averaged only 19.9 points on 41.9 percent shooting, 9.0 rebounds, 8.9 assists and 4.9 turnovers per game over that span, and the Wizards got outscored by a whopping 12.3 points per 100 possessions with him on the floor.

That was Bad Russ. But over the past two months, the Wizards have gotten far more of Good Russ.

In Washington’s 38 games since the All-Star break, Westbrook averaged 23.6 points on 44.7 percent shooting, 13.1 assists and 12.8 rebounds, although he did keep turning the ball over at a high rate (4.8 times per game). The Wizards went 20-18 over that stretch to surge back into the playoff race and put their brutal start behind them.

Simmons drew the Westbrook defensive assignment in the two games he played against the Wizards this season, so the Sixers will likely stick to that strategy unless Beal is going nuclear. Simmons has eight inches and 40 pounds over Westbrook, which should help him stay in front of Westbrook on drives to the basket.

If the Sixers can goad Westbrook into careless turnovers and pull-up jump shots, Bad Russ could send the Wizards packing for the summer.

Unless otherwise noted, all stats via NBA.com, PBPStats, Cleaning the Glass or Basketball Reference. All salary information via Spotrac.