2022 Toyota Tundra Is The Right Truck To Escape The Apocalypse 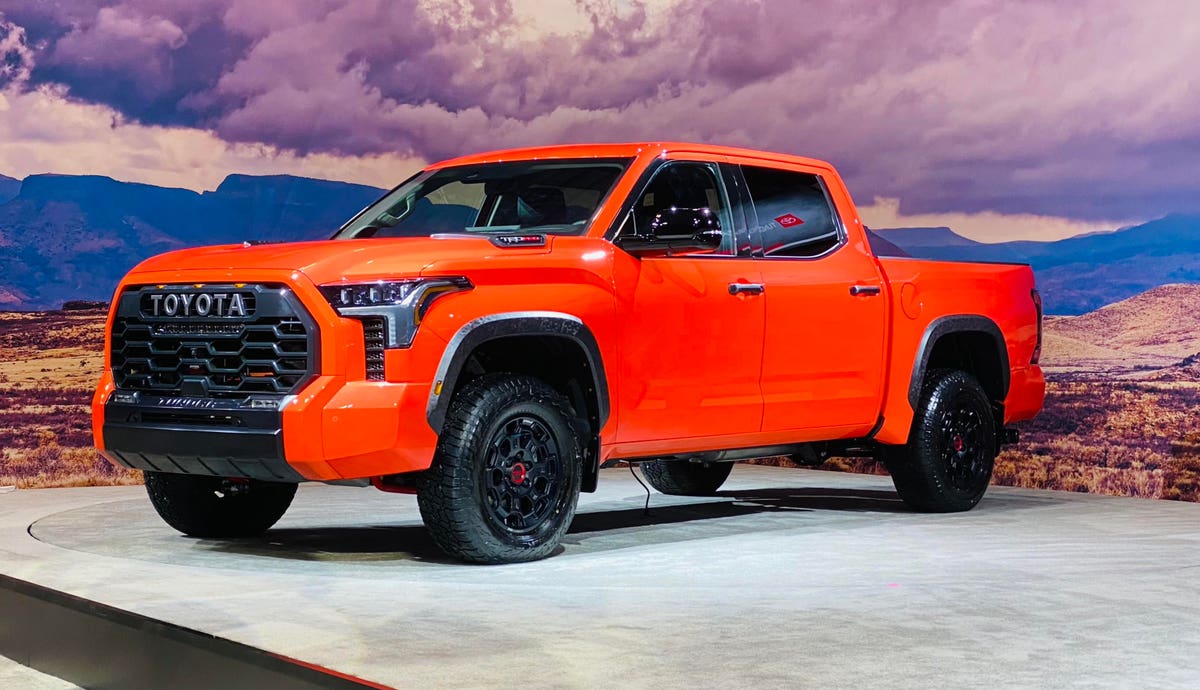 To say Toyota spent a lot of time readying the all-new Tundra is an understatement. The current version was introduced back in 2007, which even in the long product cycles of the automotive industry is a hot minute. Despite the age of the now-outgoing platform, the truck was still selling well. Toyota sold 111,673 Tundras in 2019 and 109,203 in 2020, a small dip between years that a global pandemic can easily explain. Now, to hear the company tell it, the wait for a new Tundra will be totally worth it.

The 2022 Tundra starts with an all-new platform. The internal name, F1, remains the same, but everything else has been updated. One of the key changes lies in the rear suspension, which now uses coil springs instead of the leaf-spring setup of the outgoing model. The engine, too, has been upgraded to a twin-turbo 3.5-liter V6 with a maximum power output of 437 horsepower and 583 pound-feet of torque. The standard version of the engine produces up to 389 hp and 479 lb-ft. of torque.

Toyota has all kinds of numerical things to say about the new Tundra. The truck will be able to tow up to 12,000 pounds, a 17.6-percent increase. There will be two different four-door options for the cabin and three lengths for the bed: 5.5 feet, 6.5 feet and 8.1 feet. And a maximum payload capacity of 1,940 pounds, an 11-percent increase.

But don’t expect to see all of the Tundra’s numbers just yet. Pricing, for example, and fuel economy figures are not available, but will be released some time before the truck goes on sale later this year.

As should surprise no one, Toyota strengthened the exterior design of the new Tundra. Every new truck from every company somehow needs to look tougher than the last one. And look, Toyota’s marketing materials call this the “Toughest Tundra.” Toyota also says the exterior styling is “bold.” That’s fair, because once you see that the wide grille appears to have headlight horns, you can’t see anything but an angry steer there.

Inside the cabin, the new Tundra offers a raft of updated features, including wireless Apple
CarPlay and Android Auto phone connectivity and the kinds of safety technologies new vehicles shoppers pretty much expect these days. Toyota Safety Sense 2.5 active safety is standard on all grades and it includes a pre-collision system with pedestrian detection, dynamic radar cruise control, lane departure alert and automatic high beams. The all-new Toyota Audio Multimedia system will be available on an optional 14-inch touchscreen.

There are, of course, some things missing from the new Tundra, and the big one is a more ecological powertrain choice. Truck buyers are already flocking to other companies for capable trucks that don’t burn gas, including the all-electric Ford F-150 Lightning, the Rivian R1T and the Tesla
Cybertruck (well, they’re pre-ordering the Tesla, anyway), to name just three. Mike Sweers, Toyota’s executive chief engineer for truck programs and commercial vehicle – and the executive chief engineer for the Tundra – said Toyota of course thought of alternative powertrains as it was designing the new platform.

“Keep in mind this is a global platform,” he said. “So we had multiple powertrains, from diesel to BEV to fuel cell to all sorts of stuff in the future. It was a consideration from the beginning. What could be done with the truck, what do we have available now, what’s going to be coming in the future.”

That’s a bit of a soft promise, but it’s better than nothing. We don’t know when Toyota will finally offer a viable non-gasoline Tundra, but the first major ad for the truck, which debuts during the Sunday Night Football game tonight, makes me wish it was sooner rather than later. The new slogan for the Tundra is “born from invincible” and the ad features hectic scenes of the new truck outrunning numerous dangers, from fires to dust storms to snow, alongside some digital rhinos and kangaroos. Toyota said that each of these scenes was chosen for a specific reason. The fire, for example, is represents Allyn Pierce, a nurse who used his Tundra to transport people to the hospital during a massive wildfire in California in 2018. That story had a happy ending (the people were moved to safety and the truck, which was destroyed in the effort, was replaced by Toyota) but in the ad, you simply see the new Tundra outrunning an intense blaze, similar to real-life scenes we saw from Greece earlier this summer, where people were forced to flee the island of Evia by boat when wildfires consumed the land. There’s some sort of strange message here that says if the world is going to collapse in flames due to climate change, at least you’ll have a wireless phone charger in your tough escape truck.