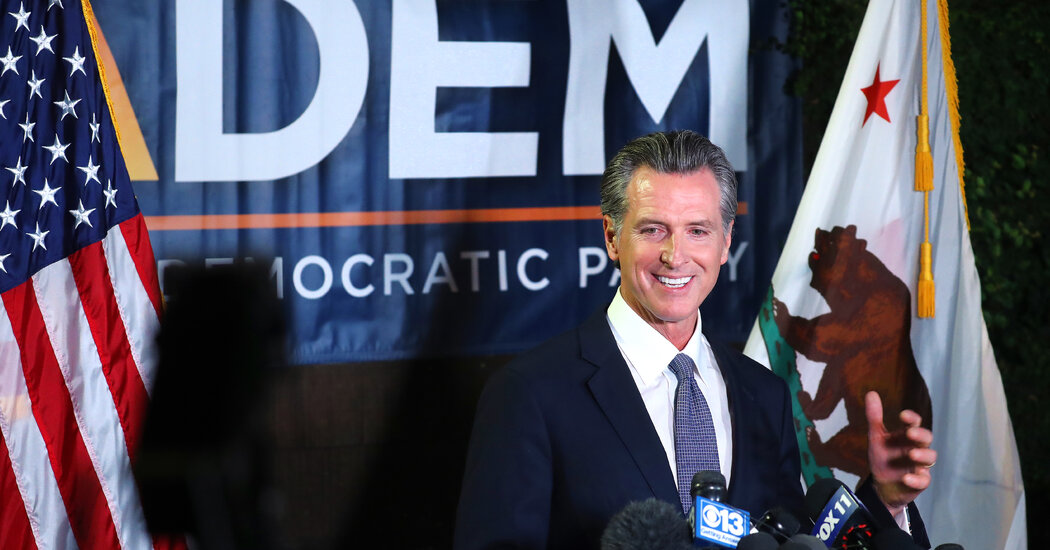 In the run-up to yesterday’s recall election in California, both Gov. Gavin Newsom and his critics framed it as a judgment on his handling of the pandemic. Newsom embraced his enactment of aggressive mask and vaccine mandates. His leading Republican opponent, Larry Elder, promised to cancel those mandates before drinking his first cup of tea on his first day in office.

The recall, as my colleague Jennifer Medina wrote, became a “referendum on pandemic management.”

Now Newsom has won that referendum in a landslide. According to the latest results, California voters rejected removing him from office by a margin of 64 percent to 36 percent. The final margin may change as the vote count continues, but it was clearly a political victory for vaccination.

I don’t mean to suggest that the politics of Covid-19 are simple. They are not. Lockdown fatigue may have contributed to the surprisingly strong showing by Donald Trump and other Republican candidates in the 2020 elections. And Democratic politicians in some places have favored measures — like outdoor mask mandates and monthslong school closures — that are both scientifically and politically dubious.

Newsom himself infamously ate a meal with friends at one of the state’s finest restaurants while his administration was urging Californians not to gather with people outside their households. It played into the most unlikable parts of his image. Only a few weeks ago, polls suggested he was in jeopardy of losing the recall.

But Newsom’s overall approach to the pandemic helped save him.

It aligned very closely with what public-health experts were urging, including the mandates for indoor masks and vaccinations, notes Soumya Karlamangla, a Times reporter based in Los Angeles. Initially, those measures hurt Newsom’s popularity, because they were cumbersome and did not seem to be making much difference. In the spring, California’s case numbers were not so different from those in Florida or Texas.

“It feels a little like he’s the perfect example of the conundrum public health officials often face,” Soumya says. “How do you get people to do something before they can see the risk is there?”

More recently, the connection has become clearer. Vaccination rates have risen high enough in much of California — and the Delta variant is contagious enough among the unvaccinated — that the state now looks very different from much of the Southeast and Mountain West, where hundreds of people are dying each day and hospitals are running out of room.

In California, Covid caseloads and hospitalizations, which were already well below the national average, have been falling for about two weeks. “Panic levels feel much lower than they did even a month ago,” Soumya says.

If anything, statewide comparisons understate the power of the vaccines; every state, including California, has areas with relatively low vaccination rates. When you instead look at California on a county basis, the picture is striking.

The large metro areas with the lowest Covid rates also happen to be the places where Democratic candidates like Newsom receive most of their votes in California.

The San Francisco Bay Area has a hospitalization rate that remains lower than the U.S. rate was for much of this year, before Delta was widely circulating. If the rest of the country looked like the Bay Area, the Delta surge would not have been nearly so bad:

And on an individual level, the vaccines are more effective than the county data suggests. In San Francisco, most hospitalized people are part of the small share of residents who remain unvaccinated.

California is obviously a deep-blue state, and Newsom’s approach surely would not work so well in a red state. Still, his Covid policies are closer to what the median American voter favors than the Republican approach is. Prominent Republicans have described Covid vaccine mandates as tyrannical, even though all 50 states impose other vaccine mandates. Some Republicans have also banned businesses and schools from taking evidence-based steps and promoted medical treatments that seem to do more harm than good.

In doing so, these politicians are aligning themselves with a minority of Americans. Nationwide, less than 25 percent of adults have not yet received a Covid vaccine shot. Only 26 percent oppose a vaccine mandate at their workplace, according to an Associated Press poll last month. Vaccinations, as CNN’s Brian Stelter has noted, are not a 50-50 issue.

No wonder that, in the country’s most populous state, the public health consensus triumphed over its critics yesterday.

Live theater inched back to life in New York over the summer, but last night was something of a grand reopening for Broadway, as “The Lion King,” “Wicked,” “Hamilton” and more returned to the stage after an 18-month hiatus.

Jessica Payne said she and her husband had flown in from Colorado to see eight shows in six days. “We both cried when the plane landed,” she said. “We’re so happy to be here.”

Theaters are requiring that everyone 12 and over be vaccinated and that everyone except performers wear a mask. Still, the virus’s recent resurgence may be affecting ticket sales: The ticket seller StubHub shows the three blockbuster shows have seats available for less than $200. And the Broadway League, a trade group, is not releasing box office data this season for fear of dampening consumer confidence.

In The Times, Michael Paulson wrote about how Broadway came back, including an N.F.L.-inspired program for performers’ voices. — Tom Wright-Piersanti, Morning editor