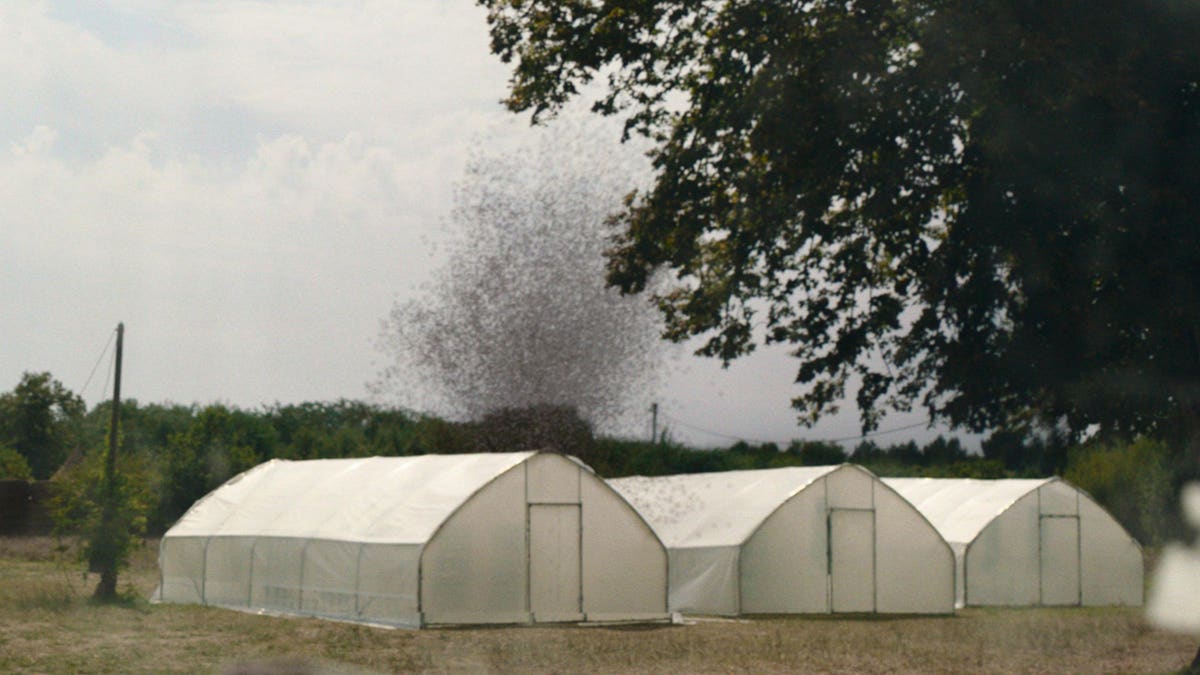 Netflix
has released this Friday August 6 a new French horror movie The Swarm (La nuée). It is an impressive debut feature by director Just Philippot, from a script by Jérôme Genevray and Frank Victor, about blood-sucking locusts bringing havoc to a struggling farmer in rural France.

The Swarm follows Virginie (Suliane Brahim), a farmer and single mother of two, Gaston (Raphael Romand) and Laura (Marie Narbonne). Virginie breeds edible grasshoppers, but her farm is on the verge of bankruptcy. Soon, she finds a strange way to feed her locusts to increase productivity, and the consequences may be dire.

The Swarm is a slow-paced film that blends different genres together. As much a social drama as it is a horror, this is a movie filled with tension that is essentially about a single mother fighting to keep afloat and provide for her two children. This is a film that is much more than what its premise and title suggest.

Recently widowed, Virginie is raising locusts as crop that she grinds to produce a high-protein flour. It’s better for the environment, she tells one of her neighbor friends. Her production of locusts though is diminishing. The insects are not reproducing. Things are made even worse by the fact that she can’t seem to get a fair price for her product.

Everything appears stacked against her. Electricity keeps getting cut off. There is hardly any hot water. To survive each month, she borrows money from Karim, a local winegrower who is happy to help. Laura’s teenage angst, exacerbated by the mockery she suffers from some of the pupils at school, clearly weighs on Virginie too. Smashing everything up out of sheer desperation, knocking herself unconscious in the process, Virginie wakes up with a big open wound on her arm. The locusts are all over her wounded arm, drinking up her blood. She decides to exploit their thirst for blood for her own benefit, as it helps the crop grow. But, once she can no longer get pig’s blood, her only resort is for the locusts to take her own blood.

There is an obvious analogy here, about farmers being themselves exploited in the desperate hope of making a profit and survive, exploited to such an extreme that their blood is being sucked dry. Underneath its premise—a horror on a lethal swarm of locusts—lies a deeper insight into our society.

It is in fact the social drama aspect of the film that really stands out. There are some great family scenes between Virginie, Laura and Gaston, especially in the little moments when the two siblings tease each other. Laura’s character is particularly interesting as her frustrations visibly rise to the surface. But, instead of falling into the cliché of the annoying teenager, Philippot and the script writers have here created a nuanced and complex character, enhanced by Marie Narbonne’s great performance.

Suliane Brahim, who also starred in the great French series Black Spot (Zone Blanche) on Netflix as well, brings great depth to her character. Brahim’s performance translates the sense of complete desperation Virginie finds herself in and the escalating obsession she has with its expansion once she finds the insects’ taste for blood.

The Swarm is a great film that intelligently weaves together cinematic genres, part social drama, part horror, building up great tension until the inevitable final sequence which lends the film its title.

The film was selected for Cannes 2020 Critics Week, won Best Actress and the Special Jury Prize at Sitges Film Festival in 2020, and was acquired by Netflix for distribution, from Wild Bunch International, for all territories except China, Spain and France. The Swarm was produced by Capricci Films and the Jokers Films