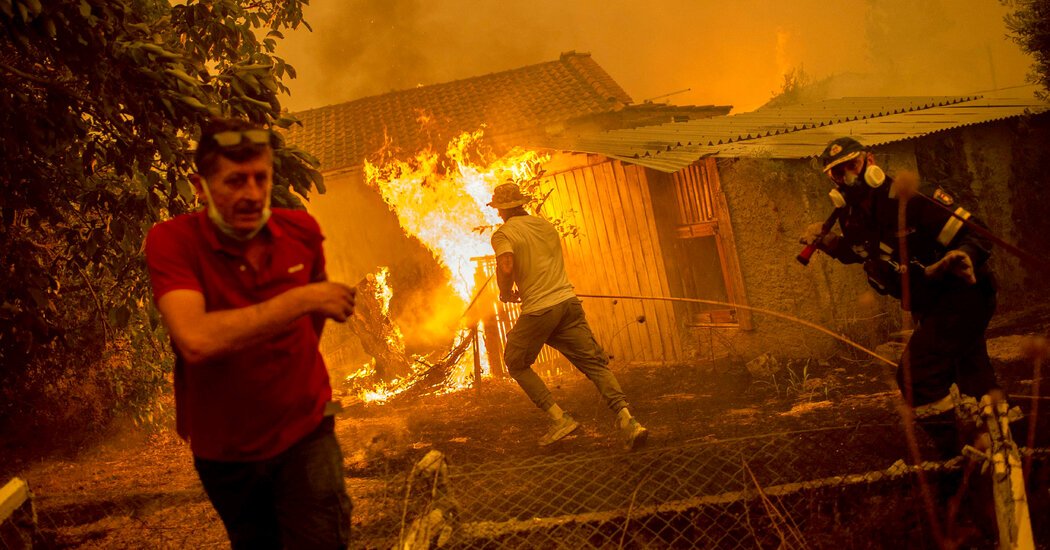 It’s too late to reverse the damage done to the Earth’s climate. It’s not too late to change course right away to prevent things from getting far worse.

That’s the scientific consensus presented this morning to world leaders by the Intergovernmental Panel on Climate Change. It’s the most complete synthesis of climate science available, based on a review of thousands of research papers assessing how the combustion of coal, oil and gas has altered the Earth’s climate and with it, human destiny.

The report doesn’t present one future foretold, though. Its most important finding is that there are several futures possible.

The cumulative emissions of greenhouse gases — led by the U.S. and the countries of Europe since the start of the industrial age, and more recently by China — have not only heated up the planet, but also placed it on course to get much worse in the next 20 years, according to the report.

The panel concludes that the average global temperature is very likely to rise 1.5 degrees Celsius, or 2.7 degrees Fahrenheit, above preindustrial levels by 2040, and to continue to warm for another 10 years. At that threshold, nearly 1 billion people could face life-threatening heat waves at least once every five years, the report finds.

We will confront more record-breaking heat (as in the Pacific Northwest in July and southern Europe last week); more frequent floods (as in India, Germany, and China); more frequent droughts (as in the U.S. West); and rising sea levels that will threaten coastal cities (as in Miami).

Those changes are baked in, and it’s imperative to prepare.

But it is still possible to limit further warming by midcentury and prevent far worse consequences, the report says. At 2 degrees Celsius of warming, the picture gets worse, with more frequent bursts of heat spikes. At 4 degrees, the world is unrecognizable.

The report’s authors show each scenario as if holding up a set of binoculars to see the road ahead, and the paths that branch off.

Which way to go?

It’s up to the leaders of the world’s most powerful nations and companies to determine which path to take. Limiting temperature rise requires big structural changes to the way the world produces electricity, heats buildings, moves around and produces food.

So the choice before those leaders boils down to this: They could pursue policies that inject more planet-warming gases into the atmosphere and warm the planet further. Or they could replace fossil fuels with clean energy and stop mowing down forests. Technologically that’s all feasible, but it hasn’t happened — not nearly fast enough — which is why we are in this predicament.

The U.S. has promised to reduce its emissions by around 40 percent by 2030, compared to 1990 levels. The European Union and Britain have more ambitious targets for emission reductions. And, unlike the U.S., the European countries have enshrined those commitments into law.

China, which today accounts for roughly 30 percent of global greenhouse gases, has said only that its emissions will reach a peak before 2030. India, which accounts for around 6 percent today, has said it would sharply increase renewable energy sources but nothing about when its emissions would start declining.

This report is hardly the first such detailed assessment of climate risks. Scientists have repeatedly offered these binoculars, and many politicians have repeatedly ignored them. The question now is whether citizens, having seen the risks close up, will force their leaders to act. “For far too long, policymakers have placed their short-term political interests and the greed of corporations ahead of the needs of their constituents,” Rachel Cleetus, climate policy director at the Union of Concerned Scientists, said.

You can read more about the report here.

Somini Sengupta is an international climate reporter for The Times.

The history of hip-hop

How do you boil down an entire music genre’s history into a boxed set? That’s the goal of “The Smithsonian Anthology of Hip-Hop and Rap,” a 129-song collection that documents hip-hop’s growth from 1979 to 2013.

A committee of around 40 artists, industry figures, journalists and academics helped choose the songs, compiling a list of approximately 900 options. From there, a smaller executive committee whittled down the picks. The producer 9th Wonder, a member of the executive committee, said its members chose songs that were “supposed to be known by the next generation coming up.”

The collection includes hip-hop’s earliest recordings; party music by Ludacris and Lil Jon; gangster rap by artists like Ice-T; and a sprinkling of white rappers, including Beastie Boys and Eminem. The history of women in hip-hop is also represented, through acts like Lil’ Kim, Missy Elliott, Lauryn Hill and Nicki Minaj. The newest track is a 2013 song by Drake, who helped usher in the genre’s full expansion into pop music.

Today, hip-hop is the dominant musical force in pop culture, Jon Caramanica, The Times’s pop music critic, writes. Ending the anthology in 2013 makes sense, he says, because “it’s hard to police a genre’s borders when the genre is the whole world.” Read the story. — Sanam Yar, a Morning writer

These meatballs have a secret: They’re half vegetable, half chicken.

“Reservation Dogs,” a dark comedy on FX on Hulu about small-time teenage crooks who dream of a better life, upends Hollywood clichés about Native culture.

In “Billy Summers,” by Stephen King, a hired killer is lured from retirement for one last job.

“Joke, joke, kill, kill — that more or less sums up ‘The Suicide Squad,’ the latest installment in the DC Comics franchise,” Manohla Dargis writes in a review.