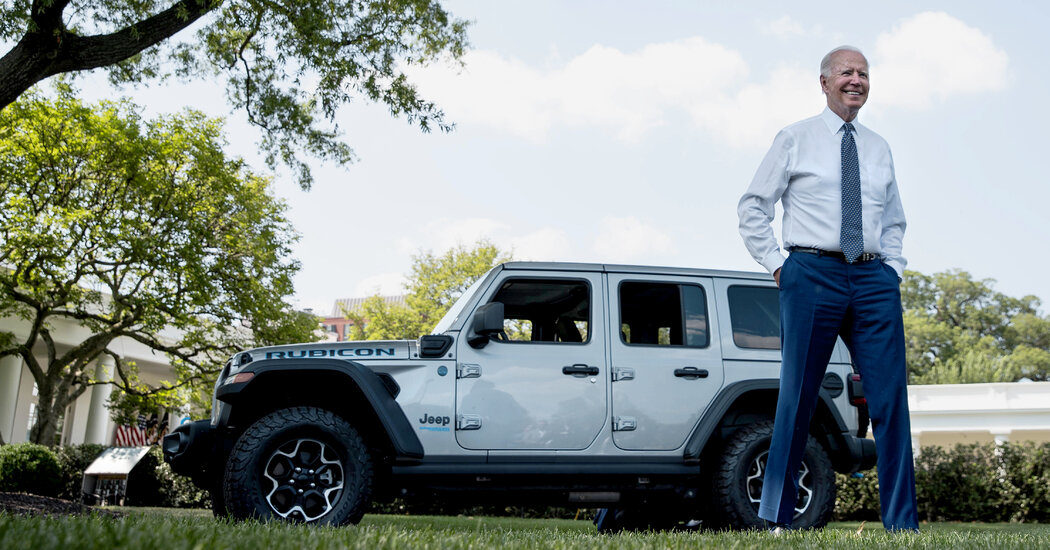 President Biden yesterday set an ambitious goal for the transition to electric vehicles: By 2030, half of all new vehicles sold in the U.S. should be electric.

Executives from the three largest U.S. auto companies joined Biden at the White House, pledging that 40 to 50 percent of their new car sales would be electric by the end of the decade.

Electric vehicles are “a vision of the future that is now beginning to happen,” Biden said. “The question is whether we will lead or fall behind in the race for the future.”

Can an electric-car revolution happen in less than a decade? Today we’ll explain the possibilities and potential pitfalls, with help from our colleague Coral Davenport, who covers climate change.

Electric vehicles are part of Biden’s effort to address climate change. Gas-powered vehicles are the biggest single source of greenhouse gases in the U.S., producing more than a quarter of the country’s total emissions.

“A rapid shift from fossil-fueled combustion engines to electric vehicles is an essential step toward mitigating climate change,” Coral said. “You can’t solve climate change without getting rid of them.” Biden is moving to strengthen auto mileage and pollution standards as well.

His electric-car push is also an attempt to keep American industry competitive. As our colleagues Jack Ewing and Neal Boudette report, Europe and China are using regulations and subsidies for automakers to bolster electric vehicles. Europe has proposed banning sales of gas-powered cars by 2035. Chinese automakers are expanding, with government help, into new markets around the world.

Reaching Biden’s goal will require rapid change. In June, less than 4 percent of the new cars sold in the U.S. were electric or plug-in hybrids.

But the shift to electric vehicles has accelerated this year, beginning with General Motors’ announcement in January that it would phase out petroleum-powered cars by 2035. Other automakers followed suit, including Mercedes-Benz, Volvo and Daimler, the world’s largest maker of heavy trucks. Ford introduced an electric version of its F-150 pickup truck, the best-selling vehicle in the U.S.

Experts and chief executives of major car companies think Biden’s goal is reachable. “It’s feasible, technologically, to replace most cars already on the road with equally affordable and powerful electric models within the next decade,” Coral said.

As governments work to make electric vehicles more available, the biggest question is whether people will buy them.

“The consumer in the middle of America just isn’t there yet,” one St. Louis-area car dealer told The Wall Street Journal this year. The long distances some people drive and the lack of widespread charging stations are obstacles to making the switch.

There are around 43,000 charging stations in the U.S. today. Biden has called for building a network of 500,000 chargers within the decade, though the latest version of his infrastructure bill includes just half of the $15 billion in funding he proposed.

Electric vehicles also tend to carry higher sticker prices than their gas counterparts. Europe and China have offered cash incentives to consumers, and more affordable options in the U.S. are becoming available. One M.I.T. study found that, factoring the costs of fuel and maintenance, electric cars may save drivers money.

Most experts say the country’s power grid can handle millions of new electric cars, but it will take careful planning, our colleague Brad Plumer has written. If every American drove an electric vehicle, the U.S. could end up using about 25 percent more electricity than it does today.

Some labor unions have also expressed concerns about the shift, since electric vehicles require fewer workers to assemble than gasoline-powered cars or trucks. Biden hopes to offset any potential job losses by growing the country’s capacity to manufacture electric vehicle batteries, Coral told us.

“But that’s a big lift,” she said. “Most of the materials for making the batteries are found in Asia, and about 70 percent of the electric vehicle battery manufacturing business is already in China.”

Modern Love: When obsessions and compulsions pressure a marriage.

A Times classic: Here’s how to lower your heart rate.

Lives Lived: In 1945, Col. Dave Severance sent U.S. Marines to the top of Mount Suribachi on the island of Iwo Jima to plant a flag. The moment, captured in a photograph, remains an enduring image of America at war. Severance died at 102.

Paris Hilton is the latest celebrity with a cooking show, joining the likes of Selena Gomez and Amy Schumer in the genre of famous people leveling up their culinary skills. These shows are often a way to expand celebrities’ businesses or maintain their relevance, as Jaya Saxena writes in Eater.

In “Cooking With Paris,” on Netflix, Hilton prepares themed meals using glittering cooking utensils for famous friends like Kim Kardashian West and Saweetie. The show was inspired by a viral YouTube video of Hilton from last year, in which she made lasagna, and it plays into her heiress persona. “Excuse me, sir, what do chives look like?” she asks a worker in one episode. “What do I do with it?”

This style of clueless cooking — seeing a person without much kitchen experience try recipes — connects with many viewers, Kelsi Matwick, a lecturer at the University of Florida, told The Times. “It’s intimacy at a distance — cooking show hosts are considered our friends and families,” she said. — Sanam Yar, a Morning writer