A Week Into Taliban Rule, One City’s Glimpse of What the Future May Hold 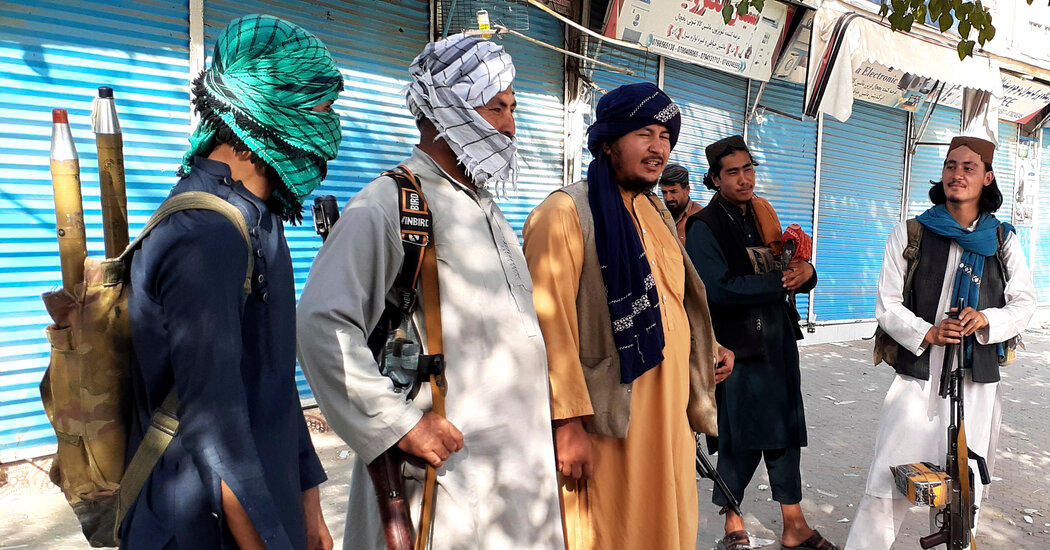 It was his first day as the Taliban-appointed mayor of Kunduz, and Gul Mohammad Elias was on a charm offensive.

Last Sunday, the insurgents seized control of the city in northern Afghanistan, which was in shambles after weeks of fighting. Power lines were down. The water supply, powered by generators, did not reach most residents. Trash and rubble littered the streets.

The civil servants who could fix those problems were hiding at home, terrified of the Taliban. So the insurgent-commander-turned-mayor summoned some to his new office, to persuade them to return to work.

Taliban fighters began going door to door, searching for absentee city workers. Hundreds of armed men set up checkpoints across the city. At the entrance to the regional hospital, a new notice appeared on the wall: Employees must return to work or face punishment from the Taliban.

Just a week after the fall of Kunduz — the first in a series of cities that the Taliban seized with breathtaking speed — the insurgents are now at the gates of the capital city of Kabul, on the verge of a full takeover of Afghanistan. This is the first time in two decades that the Taliban have held major Afghan cities, let alone most of the country. And they now must function as administrators who can provide basic services to hundreds of thousands of people.

The experience of those in Kunduz offers a glimpse of how the Taliban may govern, and what may be in store for the rest of the country.

In just days, the insurgents, frustrated by their failed efforts to cajole civil servants back to work, began instilling terror, according to residents reached by telephone.

“I am afraid, because I do not know what will happen and what they will do,” said one, who asked not to be identified for fear of retaliation by the Taliban. “We have to smile at them because we are scared, but deeply we are unhappy.”

Three days after the Taliban took control in Kunduz, Atiqullah Omarkhil, a civil servant, received a call from an insurgent fighter telling him to go to his office. The mayor of Kunduz wanted to speak with him, he said.

Mr. Omarkhil had been staying home since the retreat of government forces, as insurgents flooded into the streets and a sense of unease gripped the battered city. He had experienced a similar moment twice before, when the Taliban briefly seized Kunduz in 2015 and again in 2016. Both times, the insurgents were pushed back with help from American airstrikes.

But this time, days after the Taliban took control, the entire Afghan Army corps charged with reclaiming the city surrendered to the insurgents. They handed over their weapons and vehicles in a stark sign that Kunduz would not be rescued.

When Mr. Omarkhil arrived at the municipal office, the sprawling compound looked eerily untouched by war.

All of the government’s vehicles, garbage trucks and computers were exactly where he had left them before the Taliban took over and young fighters — who were known to loot towns they seized — poured into the city. The only sign of change was blank spaces on the walls where photos of President Ashraf Ghani had been. Instead, the Taliban’s white flags had been hung.

Inside the building, Mr. Omarkhil joined eight municipal employees and Mr. Elias, the Taliban commander, who introduced himself as the new mayor.

A young man with a long beard, Mr. Elias assured them they would not be targeted by the Taliban and instructed them to return to work, to improve people’s morale. Sharing his mobile number, he told them to call if they had any trouble from Taliban fighters.

“We have captured the city, and now we can assure the people that we will provide basic services,” Mr. Omarkhil, who was interviewed by telephone, quoted Mr. Elias as saying.

Halfway through the meeting, a shopkeeper pleaded with a Taliban bodyguard to see the mayor. Like hundreds of others, his kiosk had been mostly destroyed by fire during the Taliban’s final push. He said shopkeepers, fearing that what remained of their stores would be looted, wanted the Taliban’s promise that they could return to the market to collect their things safely, Mr. Omarkhil said.

The mayor complied, even providing reimbursement for the taxi and bus fare they spent on moving their goods, according to Mr. Omarkhil.

For the rest of the day, Mr. Elias met with other municipal leaders, trying to get services restored.

At the state-owned water and sewage corporation, he demanded that the water supply be turned back on. When a manager told him that power lines would first have to be repaired, he told the director of the electricity department to compel his employees to return.

At the local health department, the new Taliban director delivered the same message to hospital staff. Insurgent fighters gave water to the health workers and offered 500 afghanis — around six dollars — to each of the hospital guards to pay for dinner that night.

There was some progress. Government trucks began to remove trash from the streets, and workers repaired power lines. But the new normal came with a sense of disquiet.

Nearly every shop in Kunduz was closed. The shopkeepers, fearing their stores would be looted by Taliban fighters, had taken their goods home. Every afternoon the streets emptied of residents, who feared airstrikes as government planes buzzed in the sky. And about 500 Taliban fighters were stationed around the city, manning checkpoints on nearly every street corner.

“People are scared, they are not happy, and if anyone says that people are happy, he is lying,” said one civil servant with the public health directorate. “Everyone is wondering, what will happen to our future?”

By the end of the week, many residents’ fears were being realized.

At the regional hospital, Taliban fighters seized a list of employees’ phone numbers and home addresses and began calling them, demanding that they return to work, said one health worker, who preferred to remain anonymous due to security concerns.

Another, who had fled to Kabul, received a call from a Taliban fighter demanding that he return to work. He got on a bus to Kunduz at midnight and went straight to the hospital when he arrived.

At the hospital, armed Taliban were keeping track of attendance. Out of fear, the health worker said, female staff wore sky-blue burqas as they assisted in surgeries and tended to wounds from airstrikes, which still splintered the city each afternoon.

At the municipal building, Mr. Elias called another meeting of civil servants on Wednesday — this time, with armed fighters beside him. Press managers were told to stay home, as were women who worked for the government. The sale of alcoholic beverages and un-halal frozen chicken was banned, the new mayor announced. Strict Taliban rule, it seemed, had returned.