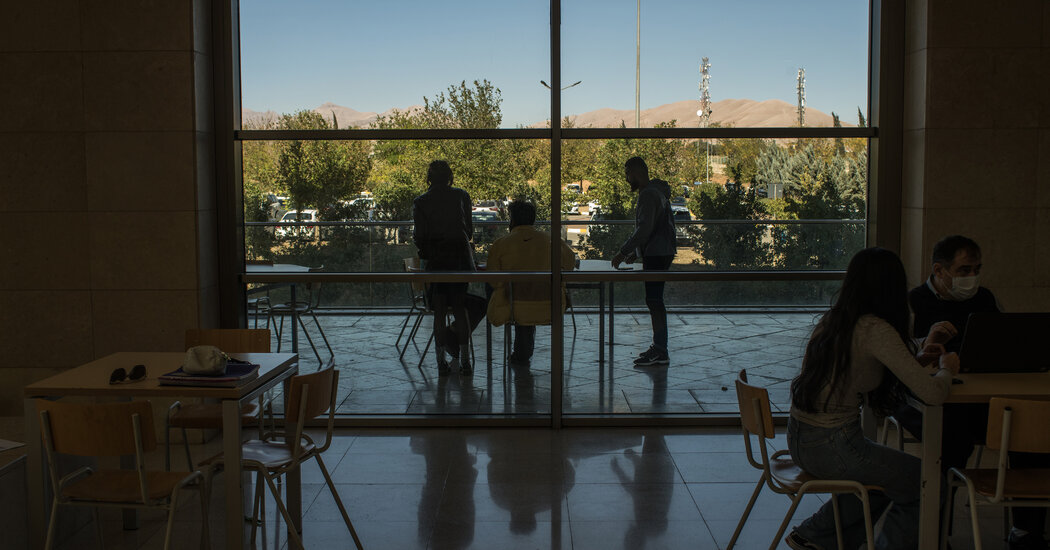 SULAIMANIYA, Iraq — As the Taliban closed in on the Afghan capital, Kabul, in August, what had been a privileged education at the American University of Afghanistan suddenly became a dangerous liability.

Students and staff frantically searched for an escape route from a country that, with the withdrawal of American forces, would fall to the Taliban — a group that has described the U.S.-funded university as a den of infidels and has shut schools and universities for girls and women.

Iraq, though, was not the first destination that came to the students’ minds as a refuge.

“OK, now I’m leaving the Taliban behind,” said Mashall, 24, a master’s student in information technology. “And now I’m going to face ISIS,” she said, describing her concern over the Islamic State when told her evacuation flight would end up in Iraq.

Those fears have proved unfounded for Mashall and her classmates, who are among the first Afghan students to arrive at the American University of Iraq in the Kurdish city of Sulaimaniya, a liberal metropolis dotted with parks, filled with cafes and restaurants, and considered the safest major city in Iraq.

The students said they realized as much when they arrived, welcomed in the middle of the night by the university’s president and professors with bouquets of flowers to a campus with no high walls or security patrols.

So far, 109 young Afghans are studying in Sulaimaniya, a portion of the 300 American University students that are ultimately expected to relocate there.

Many of the relocated students, traumatized by the loss of their homeland and haunted by worry over the families they left behind, are still in a state of shock and uncertain how to navigate life in a strange land.

On the university campus, a group of relocated students told their stories to The New York Times, speaking publicly for the first time since they were evacuated from Kabul. The Times is using only their first names and is not showing their faces in photographs to protect their families still in Afghanistan.

As the Taliban neared Kabul in August, Neda, a business student who worked part-time at the university, frantically fed student documents into a fire on the nearly empty campus. “We tried to burn all the contracts or documents so they couldn’t find the students’ names and addresses,” she said.

The students and staff feared the Taliban would hunt them down along with their families and kill them.

“The Taliban came to an office I was working at,” recalled Murtaza, a law student who was later evacuated. “They wanted to beat us. They called us infidels and American spies.

That night in August, as Neda burned papers, the foreign staff at the university had already been evacuated to a British-run security compound near the airport. For almost four hours Neda and a handful of other Afghans threw student records into the fire.

And then it was time to leave for the British compound, in what would become a harrowing journey ending in what many of the students initially considered to be the dangerous destination of Iraq.

Vice President Victoria Fontan had worked in Iraq and during the pandemic had collaborated with her counterpart in Sulaimaniya on an online curriculum. When the Kabul university started searching for a place to relocate students, she thought of Iraq and a network of powerful friends kicked into action.

Iraqi President Barham Salih, the founder of the university in Sulaimaniya and himself a former refugee, pledged to take in up to 300 students and arranged for them to enter without visas or in some cases even passports.

“The Iraqis really took an enormous leap of faith in this,” said Jared Cohen, the chief executive of Jigsaw, a technology incubator formerly known as Google Ideas. He became involved in a personal capacity after being asked by a friend, an Afghan-born BBC journalist, to help evacuate students.

Mr. Cohen said he obtained in a single afternoon from American philanthropists pledges of $3 million to evacuate and fund the studies of the 109 Afghan students in Sulaimaniya and relocate another group of civil society professionals and journalists to another country. The Qatari government provided planes to evacuate the students.

The president of the Afghan university, Ian Bickford, said another 106 students had been sent to the American University of Central Asia in Kyrgyzstan, and about 200 to other countries, including Pakistan and the United States.

Another 375 American University students are still in Afghanistan along with many more staff and hundreds of alumni, Mr. Bickford said. Many are in hiding.

Students in Afghanistan still have access to online courses led by teachers now living outside the country. But many of those students no longer have reliable access to the internet or feel safe to connect, their former classmates said.

Some students, like Neda, are still traumatized by their escape. The British security compound where she was sheltering with the university’s foreign staff was taken over by the Taliban, who demanded money and vehicles before they let the occupants leave. Neda was terrified that the Taliban, who later took photos and videos of everyone on the buses to the airport, would recognize they were not foreigners but Afghans.

When they finally arrived at the Kabul airport gate with the foreign staff, she said, British soldiers barred them from entering.

“They said, ‘No, you guys are Afghans, you cannot go,’” Neda said. She said they were kicked out of the airport and into an area controlled by the Taliban. “I was in a very bad situation because I had never seen the Taliban face to face.”

Eventually, she made it onto a Qatari evacuation flight on Aug. 21, leaving in a sandstorm amid the chaos of foreign soldiers including Turks trying to control an airport overrun with people desperate to escape.

“The Turkish army and American army treated us in a very bad way,” she said, wiping away tears. “I mean, it was my own country, it was my own land. But still they shouted at us.”

Neda did not tell her family she was going to Iraq because she knew they would worry. “All you hear about Iraq is the Islamic State and explosions,” she said.

Murtza, 22, a law student who was among those relocated, said he missed Kabul, even with its frequent electricity cuts. “I didn’t feel safe around Kabul,” he said. “But it was my hometown. It was my country. It was my soul and it was my heart.”

Mujtaba, a law student, was among a group of students who relocated to Sulaimaniya in October. Before he left, he would lie awake at night, listening to the constant roar of planes leaving Kabul.

“We couldn’t sleep because of the sound. And not just the sound, the thought that so many great people are just leaving the country. It was just devastating,” he said. Now he has become one of them. But he says he is determined to return to Afghanistan when he can to help rebuild it.

Mujtaba taught English and ran a book club in Kabul, while also teaching his mother to read.

In the small room he shares with another Afghan student in Sulaimaniya, Mujtaba writes inspirational notes to himself on sticky notes placed above his desk.

“Be strong,” said that day’s note, with a smiley face drawn underneath.