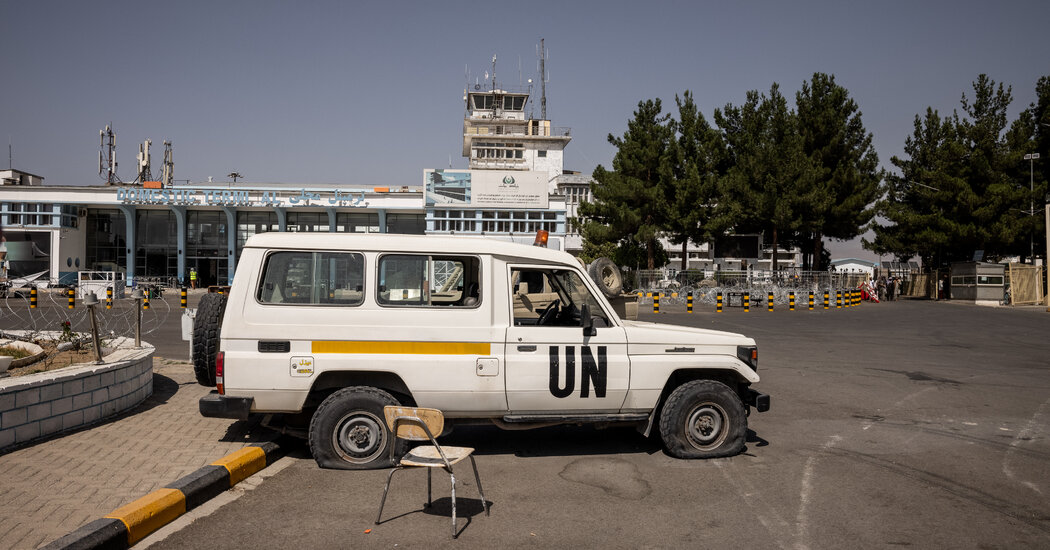 Even as American and NATO forces and almost the entire Western diplomatic corps packed up and fled the Afghan capital last month as the Taliban seized control, a handful of international aid directors made a decision: They were staying put.

They are now the most visible representatives of the decades-long Western development mission in Afghanistan, and along with United Nations humanitarian agencies, are the people on the ground negotiating with the Taliban on working conditions for thousands of Afghan employees.

Seven out of eight of the directors who stayed to lead their organizations’ aid efforts in Afghanistan are women.

“There aren’t a lot of us here,” said one of them. “There’s a lot of uncertainty.” She, like others, asked not to be named while relations with the Taliban remain so tentative.

For the past 20 years, military and diplomatic forces from all over the world took over central Kabul, filling a green zone beside the presidential palace with embassies, military bases and residences. But long before they came, nongovernmental development organizations were working to alleviate poverty and help develop essential health and educational services in Afghanistan.

Most of them were careful to distance themselves from the U.S.-led military operations after they began in 2001. They already had experience working with the Taliban, when it ruled the country in the late 1990s and as it gained control of rural districts in recent months and years.

Now, at a time when Afghanistan’s aid needs are more desperate than ever, the aid organizations’ diplomatic skills are being put to the test as perhaps never before.

One of the world’s poorest countries, Afghanistan was already in serious need before the Taliban takeover, with 3.5 million people internally displaced and 18 million people dependent on humanitarian assistance in a country of about 38 million. But aid groups worry about being too quick to embrace an organization like the Taliban with a history of brutality.

“We need to engage, because this is a very important time to engage and try to influence,” said Filippo Grandi, the head of the United Nations refugee agency. “But I think we need to reserve a bit our judgment.”

With some aid groups having as many as 1,500 local staff members employed around the country in critical fields such as health, education and agriculture, the larger organizations say they never contemplated packing up or closing down. Instead, they were left to watch as thousands who had worked in the government or with foreign organizations rushed to the Kabul airport to catch evacuation flights.

“It’s like going through the stages of grief,” one country director said of the takeover by the Taliban on Aug. 15. “When they entered Kabul, I didn’t sleep or eat anything for three days. I was numb. I was on the line with everybody, with staff around the clock.”

After some militants occupied her office, she recalled, she had to manage a tense confrontation as another group dispatched by the Taliban commissioner for foreign assistance wrested it back. Then came the ordeal of evacuating her international staff members through the chaos at the airport.

Some of the organization’s Afghan staff members chose to leave, too, but the vast majority have stayed, in large part because there is no longer a way out.

“I think the point that I accepted I wasn’t going to get out, was the point where I could sleep again,” the country director said. “My staff need me. I think I’ll be fine.”

The most immediate concerns have been to prevent looting of their offices and storehouses and to protect local staff members. The Taliban have asked humanitarian organizations to keep working and assured them that they would provide security, even handing out a phone number to call if armed men pay a visit.

Yet Taliban members have taken over the compound of at least one nonprofit organization and looted equipment and vehicles from others, several aid directors said. And fighters from the powerful Haqqani network have taken over the large campus of the American University of Afghanistan, a proud flagship of American investment in higher education for Afghans.

Besides the danger of so many armed groups, and the threat of the ISIS-K group, which claimed responsibility for a devastating suicide bombing at the airport, there is the growing problem of hunger. Last week, a top U.N. humanitarian official in Afghanistan warned that the organization’s supply of food aid was dwindling and would run out by the end of the month.

And buying food has become difficult for many, impossible for some.

Salaries across the government, including in the health and education sectors, have been halted, a result of a decision by the World Bank and the International Monetary Fund to freeze funding after the government of President Ashraf Ghani collapsed and the Taliban took over. The Central Bank’s assets were also frozen, leading banks to close and limit access to cash. For day laborers, there is no work to be had.

Outside the capital, the attitudes of Afghanistan’s new rulers vary. That has left aid organizations able to resume their usual activities in only four of the country’s 34 provinces.

In some places, everything has been suspended, from schools and health clinics to public offices and businesses. In at least six provinces, women have not been allowed to resume work, according to one of the country directors tracking the situation countrywide.

In some areas, the Taliban have visited nonprofit organizations demanding lists of staff members and assets, information on the organization’s budget and procurement contracts. They also announced that they were imposing restrictions on recruitment. Those actions are at odds with the reassurances offered by the Taliban leadership, and raise concerns about tougher controls ahead.

“They desperately need somebody to do something for the Afghan people,” Mr. Grandi, the U.N. refugee chief, said in an interview at his headquarters in Geneva, adding, “We can help a lot the people, and we must at this point.”

But he warned that humanitarian aid was not going to be enough to stave off a disaster, and urged Western governments to think fast about how to work with the Taliban to restart the larger-scale development aid that was funded through the World Bank and provided health, education and other basic services such as clean drinking water.

“They have to think through the development piece, the institutional piece, the World Bank, the I.M.F. piece quite quickly,” he said. “If you don’t do that, the risk of displacement is big.”

Already, Mr. Grandi said, he has heard the “most extraordinary concern” from European governments fearful of a repeat of 2015, when more than one million Syrian refugees entered Europe.

Further fighting might cause some Afghans to flee their country, he said. So would the imposition of a radical Taliban regime, he added. But a collapse of services and the economy, he warned, could cause a mass of movement of people from Afghanistan.

Nonprofit organizations working out a relationship with the new Taliban rulers say there need to be firm conditions.

Restrictions on women working would not only be an infringement of their rights, but would also have widespread repercussions for how aid is delivered, one country director said. Only women can enter people’s homes and assess needs reliably, and without them, development aid would be administered unfairly, she said.

“It is very important nongovernment organizations have a united front,” she said.