After Deadly Floods, a German Village Rethinks Its Relationship to Nature 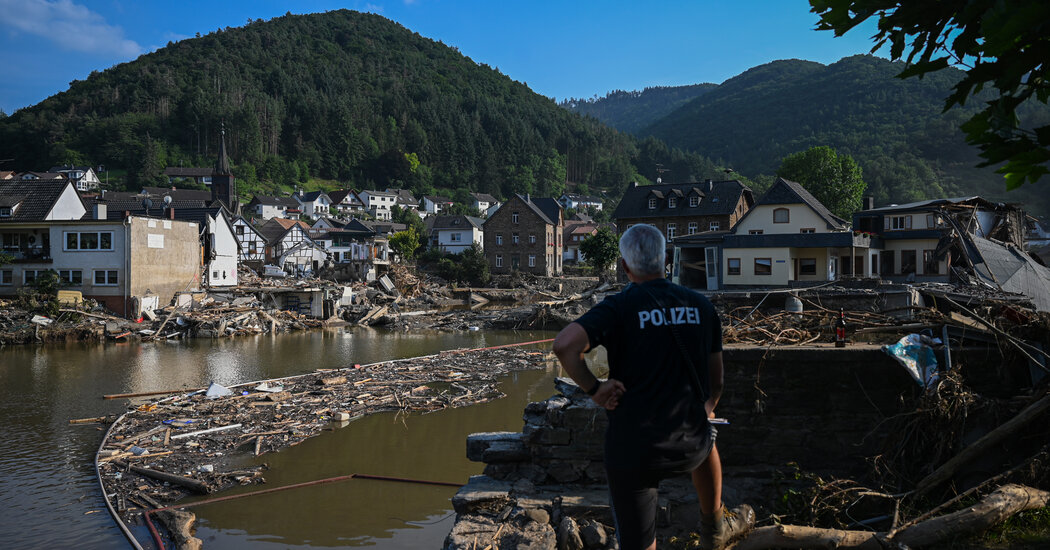 RECH, Germany — Shortly before midnight Dominik Gieler received one last WhatsApp message from his mother. She had watched as a tsunami of river first took one, then two, then all of the houses around her own. “I won’t make it out of here,” she told him.

Then the connection failed.

Mr. Gieler, the mayor of a small village in the Ahr Valley, a lush winemaking region in western Germany that became the epicenter of devastating floods last month, was only five minutes down the road from his mother but he could not help her. He was trapped on the top floor of his own house with his wife and children after the gentle brook he had played in as a boy had turned into 33-foot raging river that roared past his second-floor windows on both sides carrying roof tops and whole camper vans.

The river swallowed not just Mr. Gieler’s entire childhood home that July night but the ground it once stood on. His mother’s body was found five miles downriver ten days later.

“I have never felt so small and powerless,” he said one recent afternoon gazing at the now empty space on the opposite bank of the river.

But amid the cacophony of recriminations there is also something else. A sense of humility in the face of a calamity that no one had thought possible. The disaster brought home the realization that climate change is here, already, and even a rich country like Germany is living its effects. And it forced a painful recognition that the flooding was made worse by many bad decisions over decades, even centuries, that turned the Ahr Valley into a death trap.

“There have always been floods here but never like this,” said Guido Nisius, a local politician. “It’s the sum of all our mistakes that caused the catastrophic dimension of this.”

Mr. Nisius sees the evidence of this every day. He lives south of Rech near the Nürburgring, Germany’s most famous car racing ring. It was built in 1925 at the expense of a water retention reservoir, which had been planned after a devastating flood in 1910 but was derailed by World War I.

At the time strapped local politicians faced a trade-off: Build the reservoir as a flood protection measure. Or build the racing ring, which would put 2,500 unemployed locals to work for two years and give one of Germany’s poorest regions a nationwide attraction tied to one of the most promising innovations at the time: the automobile.

“There is no question that this water reservoir would have helped us today,” said Wolfgang Büchs, a biologist who grew up in the region and has written about the geography and vegetation in the Ahr Valley.

Economics has a way of trumping other arguments, Mr. Büchs said.

He points to the monocultures of spruce trees dotted around the mountain sides. They were first planted here in the 19th century because they grow faster and produce more wood than the native oak and birch trees. But their shallow roots do not bind the earth together as well, and these days they absorb no water at all because they are dead or dying of a bark beetle plague caused by warmer summers.

Fields of sweet corn are cultivated for cheap animal feed, but they retain much less water than grassland. The vineyards have been planted vertically, rather than horizontally, because it makes them easier to work and more productive — but the design gives rainwater a clear path into the valley.

And then there are the roads and the buildings that have encroached on the river, sealing the ground on what should be natural flood plains.

“In a way, the river has taken back what we took from it,” said Mr. Büchs, whose sister lost her job after the pharmacy she worked for was destroyed in the floods. “Our past sins, they are coming back to haunt us.”

There is a bigger lesson in the floods, he said. Germans have long lived under the illusion that the catastrophic consequences of climate change would be felt elsewhere.

That helps explain why urgent warnings from meteorologists in the days before the floods were not taken seriously by regional and local politicians and many residents.

“It was a failure of our imagination,” said Andreas Solheid, a doctor and member of the fire brigade who was on duty for two weeks straight after the floods hit. “We simply could not imagine it. We thought this happens to other countries. We see something like this on the news every week but then we change the channel and forget about it.”

Like most Germans, Mr. Solheid never doubted that climate change was real and man-made. He tracks his carbon footprint. His parents have solar panels on their roof. But the floods have disabused him and many others here of the notion that small fixes, rather than fundamental changes, are enough.

There have always been floods in the Ahr Valley. But the number has increased. There was high water in 2013 and again in 2016, although no one died. “We have been called out for extreme weather more frequently,” said Mr. Solheid, who has served in the fire brigade for 18 years.

None of the historic floods were as destructive as this one.

In Rech alone, 13 houses were washed away, six more were so badly damaged that they are being torn down. A bridge that was hundreds of years old and had withstood all past floods was destroyed. The train tracks running along the edge of the vineyards behind the village were ripped up.

For those old enough to remember World War II, the collapsed buildings, the houses with their facades ripped off and mountains of rubble conjure past traumas.

“It looks like in 1945,” said Günter Prybyla, 86, who spent five days buried under rubble in a bombed-out basement when he was 8 years old.

“But this is a war without bombs. Nature is hitting back.”

There is something almost biblical about the situation, said Adolf Schreiner, a winemaker in Rech. The droughts in 2018, the pandemic and now the floods.

His family has been making wine in the valley for four generations and never before did the water make it to their home, which is set back from the river on the incline. But this time, all his barrels and wine tanks were submerged.

One-third of his vines were destroyed and may never be replanted. But Mr. Schreiner took a philosophical view.

“Maybe a step back would not be so bad,” he said as he washed mud off hundreds of wine bottles that had been submerged in his flooded basement. “Most of us live in excess.”

Mr. Gieler, the mayor of Rech, is determined that his mother’s death and all the destruction must not be in vain.

“We need to build back in a way that is sustainable,” he said.

He wants to connect the village to a greener district heating grid, which seemed prohibitively expensive before because it required many miles worth of new plumbing. But with roads and sewers destroyed, the plumbing needs to be rebuilt anyway.

He wants to electrify the train line, which lies in ruin.

And he wants to rethink how to give more space to the river. “I don’t know that we can or should rebuild houses and vineyards where they were destroyed,” he said.

It won’t be easy, he admitted. Eighty percent of the village lives off wine.

“We will need help,” he said, both money and expertise.