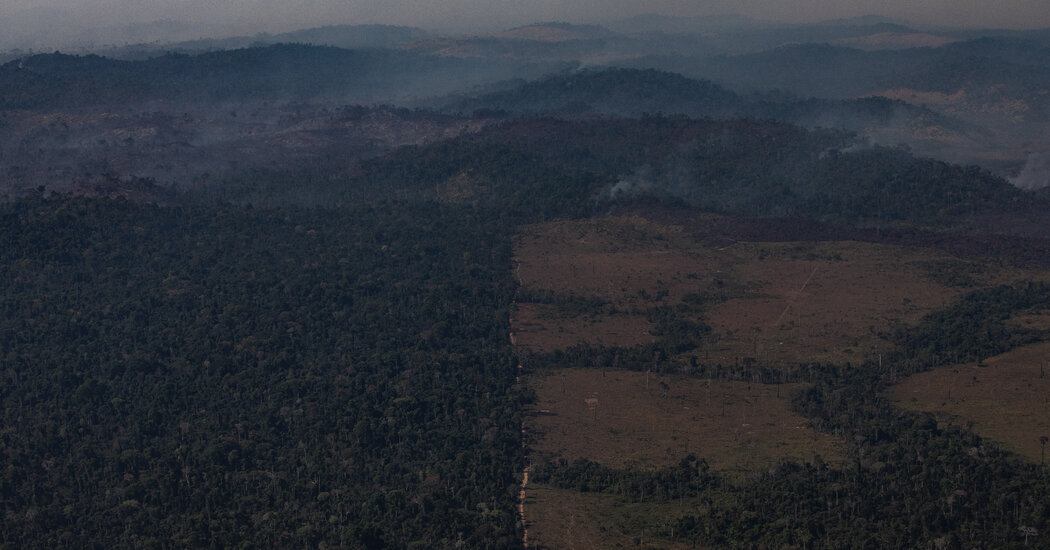 RIO DE JANEIRO — Brazil’s pledge this month to end illegal deforestation in eight years drew much praise from global leaders, but an official report this week cast doubt on that commitment after it showed that the rate of deforestation in the Amazon rainforest was at its worst in 15 years.

At the United Nations climate conference in Glasgow, Brazil, intent on reversing its reputation as an environmental offender under President Jair Bolsonaro, joined over 100 countries in promising to end deforestation. Under the plan, Brazil said it would reduce deforestation in the Amazon by 15 percent by next year.

But the report released on Thursday by Brazil’s National Institute of Space Research, or Inpe, showed that the world’s largest rainforest had lost an astounding 5,100 square miles of tree cover from August 2020 to July 2021.

Satellite data indicated that deforestation increased by about 22 percent from the previous year. It was also the first time on record that the country has reported a fourth consecutive year of rising deforestation rates. Since Mr. Bolsonaro became president in 2019, the country has lost a forest area bigger than Belgium.

“This is not surprising,” said Daniel Azeredo, a federal prosecutor who specializes in environmental crime. “The result of pulling apart Brazil’s environmental policy is deforestation.”

Adding to questions over whether Brazil would meet those targets, the report was dated Oct. 27, four days before the climate summit, known as COP26, started, suggesting that the right-wing government had the information beforehand. But at a news conference late Thursday, Joaquim Leite, the minister of the environment, denied having any knowledge of the numbers during the climate summit, where he led Brazil’s delegation.

“Maybe it was out of caution that Inpe delayed publishing this data,” he told reporters. “The information I have is that it was published today, and that this number is unacceptable.”

Acioli de Olivo, the vice president of the union that represents space researchers working for the federal government, said his team had investigated the timing of the report’s publication. The report had been ready in mid-October, he said, and was uploaded to a government platform accessible to officials before the climate conference began.

“It seems like a joke, saying they didn’t know about the report,” he said.

Izabella Teixeira, a former minister of the environment in a left-wing government, said the episode not only reflected the current administration’s incompetence, but also that its pledges at the summit were only meant to do damage control.

5 Takeaways From the COP26 Climate Summit

1. Time for action is running out. The major agreement struck by diplomats established a clear consensus that all nations need to do much more, immediately, to prevent a catastrophic rise in global temperatures.

2. How much each nation needs to cut remains unresolved. Rich countries are disproportionately responsible for global warming, but some leaders have insisted that it’s the poorer nations who need to accelerate their shift away from fossil fuels.

3. The call for disaster aid increased. One of the biggest fights at the summit revolved around whether — and how — the world’s wealthiest nations should compensate poorer nations for the damage caused by rising temperatures.

4. A surprising emissions-cutting agreement. Among the other notable deals to come out of the summit was a U.S.-China agreement to do more to cut emissions this decade, and China committed for the first time to develop a plan to reduce methane.

“Brazil can only follow its commitments when this government steps down,” she said. “We have completely run out of patience. There is no dialogue to be had.”

Mr. Bolsonaro took office vowing to develop the Amazon region rather than protect it, which critics believe has severely damaged the country’s ability to attract investments and negotiate favorable economic deals on the international stage.

With Mr. Bolsonaro running for a second term in an election set for next year, his policies undermining environmental protection agencies and encouraging miners and ranchers to occupy the Amazon are bound to come in sharp focus. A sharp economic crisis has pushed unemployment rates up and crushed his approval ratings in recent months.

The new data was also released as the European Union and United States are discussing legislation that would prevent imports of goods linked to deforestation. If those laws are enacted under a Brazilian administration that is unable to control environmental violations, they could severely affect local agribusiness, the heart of the country’s economy.

But if there is political will, Brazil has the tools to fulfill the commitments it made, said Marcio Astrini, who leads the Climate Observatory, an environmental protection organization in Brazil. From 2004 and 2012, deforestation rates dropped 80 percent.

“It’s an eight-year job, that would be herculean work,” he said. “But we’ve done it before.”