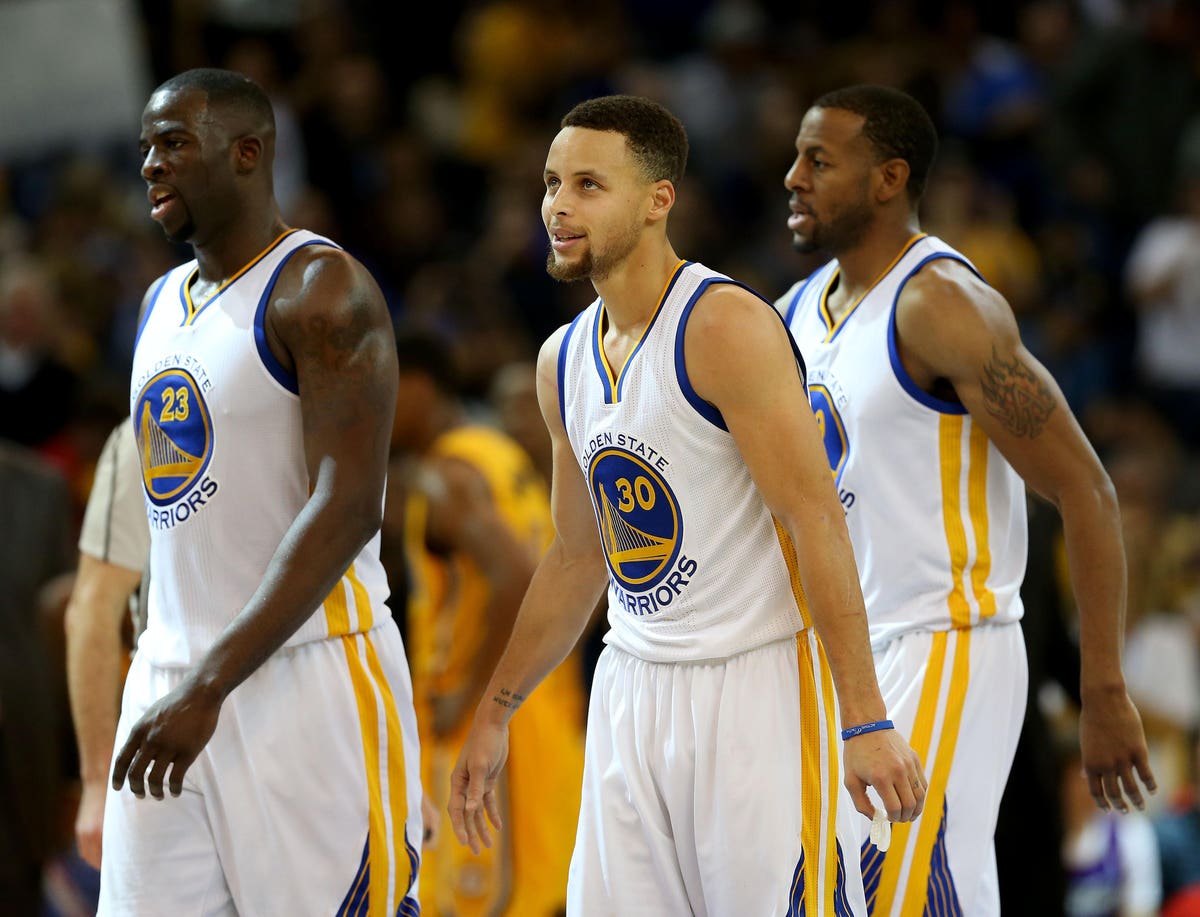 Andre Iguodala announced yesterday through a New York Times interview that he is returning to the Golden State Warriors, in a move that shocked no-one but delighted the entire fanbase. Iguodala returns a few years older, and perhaps with only a year or two left in his career, but he brings with him all the experience, leadership, and playoff clutchness that the Warriors have sorely lacked since he left. Somehow Golden State feels like Golden State again.

Surprisingly, given the market price set for veteran wings, Iguodala has reportedly signed for the veteran minimum, making the move not only a great fit on the basketball court, but also the salary cap sheet. Indeed the signing highlighted a solid free agency period which, while less splashy than many hoped, has seen the Warriors prioritize what they needed to.

The Warriors have prioritized pieces that fit around Curry

The first order of business was signing Curry to a long-term extension, which they achieved pretty swiftly. That locks down their core and their identity for five more seasons, and given Curry’s historic play last season means they should have a decent shot at title contention for much of the next half-decade if they put the right pieces around him. Indeed if there was one reminder from the Warriors disappointing 2020-21 season, it’s when they stripped down their rotation to pieces who can pass, move, hit an open shot, and be versatile on defense around MVP-level Curry they can win a lot of games.

On the other hand that well-deserved, though enormous, $215m deal means they’ll be deep into the luxury tax for the foreseeable future. That means to put those pieces around him they’ll need to double down on finding the bargains, while hoping their next generation, headlined by high lottery picks from the last two drafts in James Wiseman and Jonathan Kuminga, grow quickly enough to provide great value on their rookie-scale deals.

The second order of business was finding veteran players who could help win now, and crucially can provide that fit around Curry and the Warriors system. The Warriors haven’t done badly here, despite missing out on several of their main targets.

Obviously Iguodala fits the Warriors like a glove with his defensive versatility, playmaking chops and sky-high basketball IQ. But they actually started at the end of last season, securing Juan Toscano-Anderson, who become a bona fide vital contributor, on the minimum for the upcoming season. And before sealing the deal with Iguodala the Warriors also secured the services of Otto Porter Jr and Nemanja Bjelica, both on the veteran minimum.

Otto Porter Jr in particular could turn out to be a real coup. A 6-foot-8 wing who shoots 40% from 3, provides some versatility on defense, and can make the open pass and move off the ball is a great fit for the Warriors. Add in the fact that he’s only 28 years old, and the Warriors have somehow landed the perfect role player.

However, Porter Jr was only available at this price because of injury troubles over the last few years. In the last two seasons he’s played just 42 games in total. Since he left the Wizards, where he averaged over 76 games for the four seasons after his rookie year, he only managed to play in 54 games with the Chicago Bulls in two-and-a-half seasons, before being traded to Orlando where he played just three games. Probably the most concerning problem he’s had is with recurrent back issues, but that’s by no means the only injury he’s suffered. At the same time, the Chicago Bulls in recent years have not been a happy place to play. Porter Jr could be reinvigorated in the Warriors system and culture.

Ultimately the fantasy of Porter Jr might not match up to the reality. The Warriors will have to manage his minutes and workload, but they won’t need him to play 30 minutes per game every night. And with his potential fit with the Warriors system, he’s absolutely worth a flyer.

Meanwhile Nemanja Bjelica gives them a stretch big with genuinely deep range. He’s spent the last few seasons largely with the Sacramento Kings, where he shot over 40% from three, and put his crafty passing ability on full display. While he doesn’t quite have the athleticism or versatility on defense, he’s still a useful option for a big rotation without a shooter and in particular playing alongside Draymond Green and Kevon Looney, neither of whom space the floor.

The Warriors have also seen several players move on. The most high profile was Kelly Oubre who signed with the Charlotte Hornets. The Warriors didn’t manage to get anything back in a sign-and-trade, but given their luxury tax situation that was always a pipedream. Eric Paschall was traded away to Utah after a disappointing sophomore season that saw his early promise fizzle out, and Alen Smailagic was unsurprisingly waived after an experiment that didn’t pan out.

All three subtractions should actually make the Warriors better. While a talented player, Oubre was a poor fit with Steve Kerr’s system and his absence at the end of the season helped the Warriors create a coherent identity. Paschall struggled to find a role, and his lack of defensive intensity really stood out. Smailagic was little more than a wasted roster spot for two seasons.

That’s three spots that have now gone to three players who fit what the Warriors want to do a lot better. Indeed of the expected roster, there are now 14 players, all of whom could contribute something to the Warriors next season.

Are the Warriors done?

The one loss that stings a bit was Kent Bazemore’s decision to join the Lakers despite the Warriors offering a longer contract with more money. That leaves them with a bit of a gap until Klay Thompson returns, and probably beyond that point as he’ll need to ease his way back in. Presently they’ve just got Jordan Poole, Damion Lee, and Moses Moody behind Curry.

The Warriors are likely to open up a roster spot through waiving the non-guaranteed contracts of Mychal Mulder and Gary Payton III so could look to plug that gap. One potential candidate out there for that final roster spot who might be available on a minimum deal would be Avery Bradley, who could provide the Warriors with that backcourt depth while Thompson is out and as a ball-hawking guard who can hit the open three would basically be another version of Bazemore. Another option could be JJ Redick, who would give them another high quality shooter to cause havoc off their screening action with Curry.

Alternatively the Warriors are still quite light on their big man rotation with only the injury-prone Looney, a developing Wiseman, and Bjelica in the rotation. When it matters Green will move to the center position, so they might try to get away with that grouping, but they could use another big body. Marquese Chriss is a name to watch here.

They also have their taxpayer Mid Level Exception sitting there unused. However, with the repeater tax using the taxpayer MLE would add around $40m to their total salary and tax bill. So it now looks unlikely they will do anything with that for now, especially after securing the players they were able to on value deals. It could come in handy on the buyout market at the trade deadline though so it might not be the last heard of it.

Even the repeater tax hit on a veteran minimum contract is sizeable though. The Warriors currently project to be between $35-$40 million over the luxury tax threshold, where each dollar is taxed by a multiple of 6.25 due to the enhanced repeater tax penalties. So the $1.67m cap hit of a veteran minimum contract adds almost $8m in tax, and just over $10m in total. They’ll have to weigh up that extra cost against any potential additional signing.

The Warriors are planning for accelerated development

If the Warriors don’t make any further moves, that throws the spotlight back on their new generation. With that shortened big man rotation Wiseman will be in line for a bigger role than perhaps many anticipate. And with the lack of backcourt depth, expect to see an immediate role for Moody. Early signs from summer league suggest Kuminga may be raw, but he plays with an aggression and physicality that should enable him to make an impact earlier than expected too. If Porter Jr isn’t able to play every game, and the Warriors are keeping the regular season minutes off Iguodala, that will come in handy. But it will also aid their quest to speed up the development of their young players, and close the timeline gap between the new generation and their veteran core.

The Warriors have invested in their development staff to help this journey too, but this is an area where bringing in Iguodala could pay major dividends. He’s long been one of the NBA’s best veteran leaders on and off the court. Iguodala has already spoken to the New York Times of bringing his Miami Heat experience and their “militaristic, kind of Navy seal approach” to bear on the new rookies. Kuminga and Moody won’t have a better player to learn from in their early careers.

Can the Warriors fuse their timelines together?

The Warriors struggled to fuse their two timelines together last season but enhanced roles for their younger players should be less of a problem in the upcoming regular season. With Thompson coming back and the increased veteran depth, with a much cleaner fit, the Warriors are likely to be much improved. A deeper version of the team seen over the last couple of months of the 2020-21 regular season will be in contention for a good playoff spot, and quite possibly homecourt advantage.

By the time the playoffs roll around, the Warriors will hope Thompson is back close to his old self, and that they can ramp up Iguodala’s minutes when it matters most. If so, they’ll be able to run out a throwback rotation of Curry, Thompson, Iguodala, Green and Looney who have proven to be a very tough playoff out. Complementing that with Andrew Wiggins, Toscano-Anderson, Poole, and Porter Jr, anything they get from Wiseman and the rookies is a bonus rather than a necessity.

All in all, after a couple of years out of the picture, the Warriors are finally poised to make some noise again.