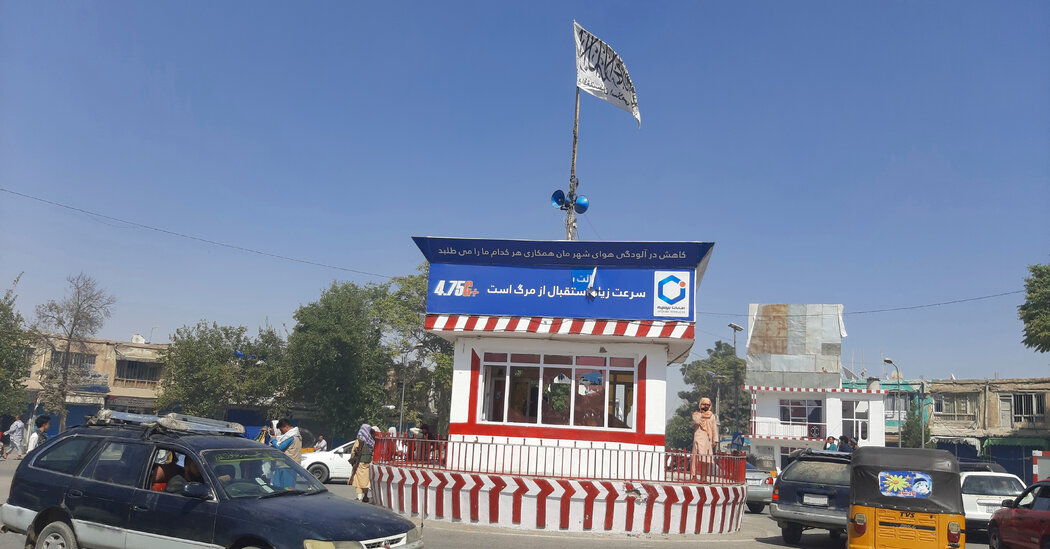 KABUL, Afghanistan — The Taliban seized three Afghan cities on Sunday, including the commercial hub of Kunduz, officials said, escalating a sweeping offensive that has claimed five provincial capitals in three days and shown how little control the government has over the country without American military power to protect it.

Never before in 20 years of war had the Taliban directly assaulted more than one provincial capital at a time. Now, three fell on Sunday alone — Kunduz, Sar-i-Pul and Taliqan, all in the north — and even more populous cities are under siege, in a devastating setback for the Afghan government.

The fall of these cities is taking place just weeks before U.S. forces are set to complete a total withdrawal from Afghanistan, laying bare a difficult predicament for President Biden.

Since the U.S. withdrawal began, the Taliban have captured more than half of Afghanistan’s 400-odd districts, according to some assessments. And their recent attacks on provincial capitals have violated the 2020 peace deal between the Taliban and the United States. Under that deal, which laid the path for the American withdrawal from the country, the Taliban committed to not attacking provincial centers like Kunduz.

On Sunday, administration officials said that Mr. Biden had been briefed on the events in Afghanistan but was not changing course on the final troop pullout.

The Taliban’s rapid victories have amplified fears about the Afghan security forces’ ability to defend what territory remains under government control. Since May, the insurgents have swept across the country’s rural areas and, in late June, they began assaulting major Afghan cities for the first time in years.

Provincial capitals are often the last islands of government presence in provinces flush with Taliban fighters, and they shelter hundreds of thousands of Afghans who have been recently displaced by fighting. Adding to many Afghans’ unease, the Taliban have trumpeted their recent victories on social media in a concerted effort to promote the sense that their return to power is inevitable.

The string of Taliban victories has intensified both the strategic and psychological encircling of Kabul, the nation’s capital. While the Taliban have continued their assassination campaign against Afghan officials and civil society figures in the capital in recent days, they have not yet begun any intense military operations around Kabul, perhaps waiting to gauge the American and government reaction to their recent triumphs.

The simultaneous sieges on provincial hubs have exhausted Afghan security forces and stretched military resources dangerously thin. Overwhelmed, the Afghan forces have concentrated on defending key cities like Lashkar Gah and Kandahar in the south, Herat in the west and Kunduz in the north in recent days — leaving others vulnerable to capture.

On Friday, the Taliban seized on that opening: In Zaranj, a provincial capital near the border with Iran, insurgents faced little resistance upon entering the city. A day later, they captured another capital, Sheberghan, the northern stronghold of the warlord Marshal Abdul Rashid Dostum, whose militia forces were overrun. On Sunday, Taliban forces broke through in three more provincial capitals, including Kunduz, a vital commercial hub that the group has long coveted as both a strategic and symbolic prize.

The shift in the Taliban military offensive to capturing Afghan cities is the beginning of a bloody new chapter unfolding in Afghanistan, experts say.

“This is now a different kind of war, reminiscent of Syria recently or Sarajevo in the not-so distant past,” Deborah Lyons, the special representative of the U.N. secretary-general for Afghanistan, said at a special session of the United Nations Security Council on Friday. “To attack urban areas is to knowingly inflict enormous harm and cause massive civilian casualties.”

Ratcheting up the pressure on another front, the insurgents have also highlighted their ability to make targeted strikes within Kabul: This week the Taliban claimed responsibility for an hourslong attack on the residence of a top military official and the assassination of a senior government official in Kabul.

The Taliban’s siege of Kunduz, a city of 374,000 people, began in late June, and they wore down government soldiers and police units in clashes that raged around the clock. On Saturday night, the fighting intensified as the Taliban made a final push against exhausted government troops.

Ahmad Shokur Ghaznawi, a Kunduz resident, said he had heard a barrage of gunfire as security forces and Taliban fighters clashed in the alley just outside his home. As the fighting intensified, about 50 members of the Afghan security forces massed in the alley. But the government soldiers appeared worn down.

“They said that they were hungry — they had run out of bread,” Mr. Ghaznawi said.

By Sunday morning, the security forces had retreated to a town south of the city and Taliban fighters flooded into the streets on motorcycles, in police vehicles and in Humvees.

As the Taliban raised their flag over Kunduz’s main square and released hundreds of inmates from the central prison, a sense of unease rippled across the city: Plumes of black smoke billowed into the sky, after two of the city’s main markets caught fire. Fearing their stores would be looted, shopkeepers moved their goods into their homes.

“The people just want to flee alive and leave all their belongings behind,” said Sulaiman Satarzada, 28, a businessman in Kunduz.

By the day’s end, the Taliban had also captured the northern city of Taliqan, the capital of Takhar Province, and Sar-i-Pul, the capital of the northern province with the same name. With Sar-i-Pul Province now mostly under their control, the insurgents have positioned themselves to attack Mazar-i-Sharif, the economic hub and capital of Balkh Province, from two different directions: Sar-i-Pul and Jowjzan in the west and Kunduz in the east.

By Sunday evening, no central government officials — including President Ashraf Ghani — had commented on the capture of the five provincial capitals; the Afghan Ministry of Defense simply said that Afghanistan’s security forces were fighting around the country, killing scores of Taliban fighters.

For nearly two decades, the United States and NATO have engaged in the nation-building pursuit of training, expanding and equipping Afghanistan’s police, army and air forces, spending tens of billions of dollars to build government security forces that can safeguard their own country.

But the Taliban’s offensive has revealed the fragility of those forces.

Thousands of soldiers have surrendered or deserted in recent months. The country’s fate has rested in the hands of air and commando forces who have served as the nation’s firefighters, sent to hot spots with hopes of turning the tide against the insurgent group. In reality, what were once considered elite forces have transformed into foot soldiers who are some of the only troops capable of defending territory under attack by the Taliban.

The United States, despite pledging to end military operations by Aug. 31, has committed more aircraft and drones — now based outside the country — to help beat back the Taliban through airstrikes. The last-ditch effort to prop up the Afghan security forces helped in some areas including Kandahar, a linchpin of the South and a former Taliban stronghold where fighting intensified in recent weeks.

On Sunday evening, Afghan security forces began a military operation to flush Taliban fighters out of Kunduz in a bid to retake the city, officials said. But battered by weeks of intense fighting, the chance of a victory was anything but certain.

“We are so tired, and the security forces are so tired,” said Sayed Jawad Hussaini, the deputy police chief of a district in Kunduz city. “At the same time, we hadn’t received reinforcements and aircraft did not target the Taliban on time.”

As the front lines are pushed deeper into cities, Afghan civilians have been trapped amid these escalating levels of violence — including government airstrikes, shelling and the Taliban fighting from people’s homes — causing civilian casualties to soar.

In Kunduz, up to 70 civilians a day are brought to Kunduz Regional Hospital, according to Mohammed Naim Mangal, the facility’s director. Between Saturday and Sunday alone, the hospital triaged nearly 100 wounded people.

But with intense fighting in the streets, many others who were wounded could not make it to medical centers. The hospital itself was hit by four mortars on Saturday.

By Sunday evening, as the city braced for more violence as government forces began an operation to retake the city, only two doctors remained at the hospital. The rest of the staff fled.