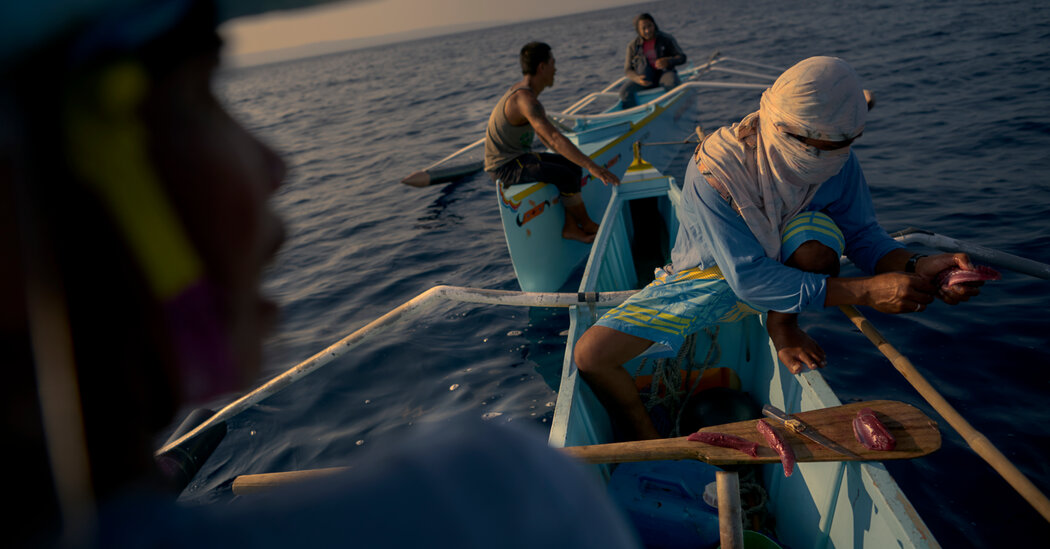 MASINLOC, the Philippines — The fishermen along the western coast of Luzon Island, in the Philippines, have known for generations that the seas, the tides and the weather can determine their fortunes. More recently, they have added China to that list.

Scarborough Shoal, a nearby triangular chain of reefs and rocks in the South China Sea, was once the source of bountiful catches of large reef fish. But the fishermen are no longer allowed to go near it.

“The Chinese have already swallowed Karburo whole, but that area is really ours,” said Johnny Sonny Geruela, using the Filipino name for Scarborough. Mr. Geruela lives in Masinloc, a small fishing community just 124 nautical miles from the shoal.

China’s Coast Guard has had ships anchored near Scarborough for almost a decade. Five years ago this week, an international court ruled that the territory was well within Manila’s exclusive economic zone, and invalidated China’s expansive claims in the South China Sea. Beijing has effectively ignored the ruling and expanded its presence in the region.

Filipino fishermen like Mr. Geruela now avoid the shoal, where they once sheltered during storms, exchanged greetings and cigarettes, and harvested the abundant reef fish. And the lessons of Scarborough are playing out elsewhere in the South China Sea, as China continues to flex its muscle on the water and pursue power through a campaign of steady provocation.

Earlier this year, China anchored hundreds of boats near Whitsun Reef, a speck of land just miles from Scarborough that both the Philippines and Vietnam say belongs to them.

Chinese fishing boats, backed by maritime vessels, have also anchored around Thitu Island, a feature in the Spratly archipelago occupied by the Philippines. The Philippines, Brunei, Malaysia, Taiwan and Vietnam have competing claims to territory in the South China Sea, while China claims most of it.

Mr. Geruela helped gather images and data for the lawyers who argued on behalf of the Philippines at the international tribunal. In gratitude, Antonio Carpio, a retired Supreme Court justice who was part of the team, gave him a book and two Nikon underwater cameras to document his frequent fishing trips.

“What can small fishermen like us do?” Mr. Geruela said from the wheelhouse of his boat after a recent fishing expedition. “We can complain all we want, but the enemy is powerful, so we try to survive another day and just fish.”

People in several communities along the Luzon coast say overfishing by the Chinese boats that prowl the waters has led to a steep drop in their catch.

A survey by Pamalakaya, a group that fights for fishermen’s rights, estimates that fishermen from Masinloc and nearby towns have lost about 70 percent of their income because they no longer have access to Scarborough Shoal.

Much of the blame has been directed at President Rodrigo Duterte, who the fishermen say squandered the country’s victory at the tribunal by cozying up to China in exchange for economic aid.

Mr. Duterte rarely criticizes China for its expansionism, but he still speaks of the court ruling as a triumph, telling the United Nations General Assembly last year that “we firmly reject attempts to undermine it.”

For Gerry Rizal, 58, a seasoned fisherman, the president’s statement was insufficient and too late to undo the damage caused by China’s territorial aggression near the shoal.

Mr. Rizal, a grandfather of three, has been fishing in the area around Scarborough Shoal since the 1980s. “There were times we attempted to go there, but were told to go away by the Chinese,” he said. “They had bullhorns and barked orders for us to go away. But they should be the ones to leave. That is our traditional fishing and sheltering area.”

Mr. Rizal lives in the village of Kato, about 50 kilometers north of Masinloc. He remembers the calm pool inside the shoal as an ocean of exotic fish, which would come up to nibble at his feet when he dipped them in the water. Nowadays, Chinese Coast Guard boats frequently patrol the area.

Coast Guard officials do not physically harass the fishermen, he said, but they sometimes sabotage the fishing lines left by Filipinos.

In 2019, 22 Filipino fishermen had to be rescued after a Chinese vessel struck and sank their fishing boat. Some fishermen later felt that Mr. Duterte had downplayed the incident to avoid damaging his relationship with Beijing.

Erodel Rivera, a father of three who voted for Mr. Duterte and his promise to protect the rights of Filipino fishermen, said he felt the president had taken him for a ride.

Mr. Rivera, who lives in a village up the coast from Mr. Geruela’s, believes fish stocks are being depleted by Chinese boats, even before the fish reach the coast of Olanen, a tiny village on the western tip of Luzon.

On a recent afternoon, dried, stuffed puffer fish swayed gently in the breeze at the family’s seaside shanty as Mr. Rivera’s older brother, Erwin, fixed hooks and repaired gear. Mr. Rivera proudly showed off the spear of a six-foot blue marlin he had once caught. It was so much bigger than his 4-foot-7-inch frame that he simply towed it to shore until the fish grew tired, he said.

Before the Chinese took control of some parts of the South China Sea, Mr. Rivera said, such fish would come to the waters off the village. “But when the Chinese fished heavily in the area, including near the Karburo, our catch also dwindled.”

Manila’s foreign office said it had filed roughly 100 protests against China since Mr. Duterte took office in 2016. The latest, in May, was over the “incessant deployment, prolonged presence and illegal activities of Chinese maritime assets and fishing vessels” in the vicinity of Thitu Island.

In May, China’s Ministry of Agriculture and Rural Affairs went ahead with its annual fishing ban in the South China Sea, which is expected to last until August. The ban is meant to allow fish stocks to recover, but officials in the Philippines have told their fishermen to ignore it because, technically speaking, it does not apply to them.

The officials also said fish stocks are likelier to have been depleted by large Chinese vessels than by the small canoes and motorboats typically used by impoverished Filipino fishermen.

Still, the heavy presence of Chinese maritime ships monitoring the region effectively forces the fishermen to observe the ban, leaving Mr. Geruela and others to wonder why they must pay the price for the Chinese fleets’ domination of the water.

Without access to the shoal, Mr. Geruela has switched to operating a “payao” — an artificial reef made of bamboo, drums and Styrofoam — about 60 nautical miles southwest of Scarborough (and “far from the Chinese,” he joked).

On a recent sunny day, the J-Dan, his wooden vessel, crewed by up to 22 people, glided to port in Masinloc after a night of fishing. It had come back with just 300 kilos of black scad, which would be distributed at the local market.

“Some days are like this,” Mr. Geruela said. Things were much better when he and others “could go inside the shoal,” he said.

But the mild-mannered father of four is pragmatic enough to admit that the country has already lost Scarborough Shoal, and that it is unlikely to regain full access to its rich fishing grounds. “We can’t beat them by force,” he said of the Chinese. “We are simply no match, that is true. But we can protest and adapt.”

Highlights From The BP Statistical Review Of World Energy 2021

James Charles Ranks Among YouTube’s Most Disliked After Comeback

James Charles Ranks Among YouTube’s Most Disliked After Comeback