As Cities Fall in Afghanistan, the Propaganda War Grows 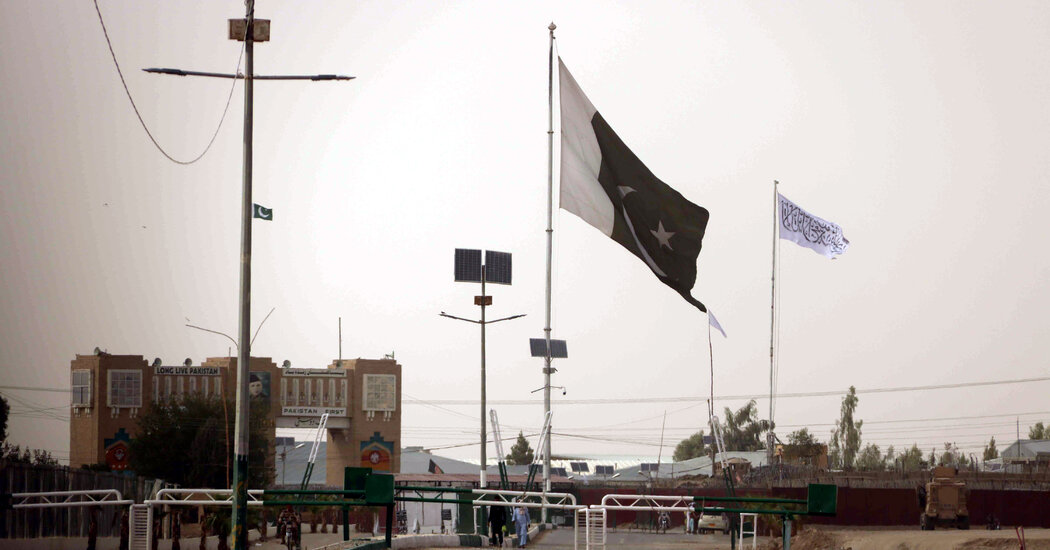 All the while, the Afghan central government has acknowledged very little of it.

In three days, at least five provincial capitals have been seized by the Taliban, in a ruthless land offensive that has led many local officials to abandon their posts and flee the cities they run.

But the nation’s government, still trying to promote the impression that it has the upper hand against the Taliban, has been relatively silent on the enormous losses suffered across the country. Rather than admitting that the cities have fallen, the government has simply said that Afghanistan’s brave security forces were fighting in several capitals around the country, and that airstrikes have resulted in scores of dead Taliban fighters.

“The country’s security and defense forces are always ready to defend this land,” the Afghan Ministry of Defense tweeted Sunday as Kunduz was under siege. “The support and love of the people for these forces increases their motivation and efforts.”

With cities falling and the American military campaign mostly finished, the propaganda war in Afghanistan has taken on outsize importance. For the Taliban, it is an effort to communicate a drumbeat of victories, large or small, and to create an air of inevitability about their return to power. For the government, it is an all-out effort to stave off panic, boost morale and minimize losses.

In recent days, the Taliban have shared videos of cheering crowds welcoming them into provinces (though some say Afghans are doing this only to avoid being harmed by the Taliban later). On social media, Taliban spokesmen have been blaming civilian casualties and infrastructure damage on the Afghan government, rather than on the group’s aggressive takeover of vast segments of the country.

Their posts call on Afghan security forces to surrender, with promises that they will be treated humanely, accompanied by photos of seized weapons and security forces who have given up. Notably missing from any Taliban messaging is any mention of reconciliation with the government.

The government’s information strategy has sought to create the opposite impression, with often exaggerated and sometimes false claims about military victories, retaken districts and assertions of Taliban casualties.

This approach emerged this summer as a stand-in for something much more concrete: a publicly enunciated plan to defeat an enemy that seems on the verge of crushing Afghanistan’s fragile government institutions. Instead, Afghan leaders offer assurances, meeting regularly for an elegant group photograph at the presidential palace, conveying an image of stability and calm in the face of the violence.

But the news outside of Kabul, the capital, has created a disconnect, particularly as alarming reports filter in from provincial officials of Afghan security forces — exhausted, hungry and under-resourced — being overtaken by insurgents, or surrendering altogether.

In the north, the key city of Mazar-i-Sharif is now largely surrounded, as the capitals of three neighboring provinces fell to the Taliban Sunday. In the south, the economic hub of Kandahar has been under siege for a month, despite an escalation in U.S. airstrikes to slow the insurgents’ advance.

By Sunday, senior government leaders still had not publicly acknowledged the seizure of any provincial capital; instead, tweets from the Afghan Ministry of Defense touted the deaths of hundreds of Taliban fighters, but the government has inflated these casualties in the past.

A fledgling plan to slow down the Taliban’s string of victories does now exist, U.S. and U.N. diplomats and officials say, and it hews closely to longstanding U.S. recommendations that the Afghans consolidate their remaining forces around crucial roads and cities, as well as key border crossings, effectively abandoning most of the dozens of districts already seized by the Taliban.

Mr. Ghani alluded to this plan in a speech to Parliament on Aug. 2: “The Afghan Army is going to focus on strategic objectives,” he said. “Afghan police officers must provide cities and strategic districts with security.”

But the Ministry of Defense continues to insist that the government intends to retake all of the hundreds of Taliban-captured districts within six months.

“Our strategy is to increase the number of airstrikes on the Taliban,” said Fawad Aman, the Ministry of Defense spokesman — though in recent weeks it has been U.S. airstrikes that have been playing a major role in slowing down the Taliban. “First, we will recapture the districts that are very important. Then we will try to recapture all the districts in the control of the Taliban.”

That would run directly counter to what Americans have advised for months: not to defend the rural districts. This is in effect what has been happening anyway, as Afghan forces, in district after district, have surrendered or fled, at times without a fight.

And despite counter messaging from the government that it’s killing Taliban fighters at astonishing numbers, any casualties they have incurred appear to have had a limited effect on the group’s military campaign. Since the beginning of May, the Taliban have captured about 200 districts, putting them in control of more than half of the 400-plus districts in Afghanistan.

“There was no operation,” said Lutfullah Mashal, a delivery truck driver in Balkh district in the north, which the government falsely claimed to have recaptured after it was overtaken by the Taliban in June. “The Taliban are moving freely around the district. They tax people and they have implemented all their old rules.”

The driver’s observation was confirmed by an official at the provincial police headquarters who was not authorized to speak to the media.

Where the government fails to hold a district it has recaptured, if only briefly, the consequences can be severe for the residents.

On July 18, members of a pro-government militia recaptured Malistan district in the province of Ghazni, populated by Hazaras, a largely Shiite ethnic group persecuted by the Sunni Taliban. The next day, the Taliban pushed the militia members out. Some 20 of the district’s Hazara civilians were killed by the Taliban; dozens more fled to Kabul. The government never publicly acknowledged the renewed loss of Malistan district.

The government’s fitful narrative appears to have convinced few. “The government does have the capability to recapture districts,” said Mirza Mohammad Yarmand, a former deputy interior minister. “But the main point is, what are they going to do after recapturing them?”

“The districts will soon collapse again,” he added.

A senior officer in the country’s military, who asked not to be named because of the sensitivity of the situation, noted that many Taliban conquests are carried out by a small force of 10 or so fighters from whom it should be easy to take back districts. Yet even if they were to do so, he said, Afghan security forces would be unlikely to hold them because of weak defenses, weak local leaders and a lack of central government support.

Bashir Ahmad Nemani, a local police commander in the northern province of Badakhshan, saw those weaknesses firsthand. The province, including his district of Khwahan, is now almost entirely in the hands of the Taliban — a bitter pill for the government as it was the one area in Afghanistan that resisted the insurgents throughout their reign in the late 1990s.

“There was no option,” he said. “Everything was destroyed. The police collapsed.” Mr. Nemani fled across the border to Tajikistan with six of his men.

Flown to Kabul by the Tajiks, he said he wants to continue to fight and is only awaiting word from the government to return and take up arms again.

“There is a lot of pain in my heart,” Mr. Nemani said. “Who could be happy with this brutal situation?”