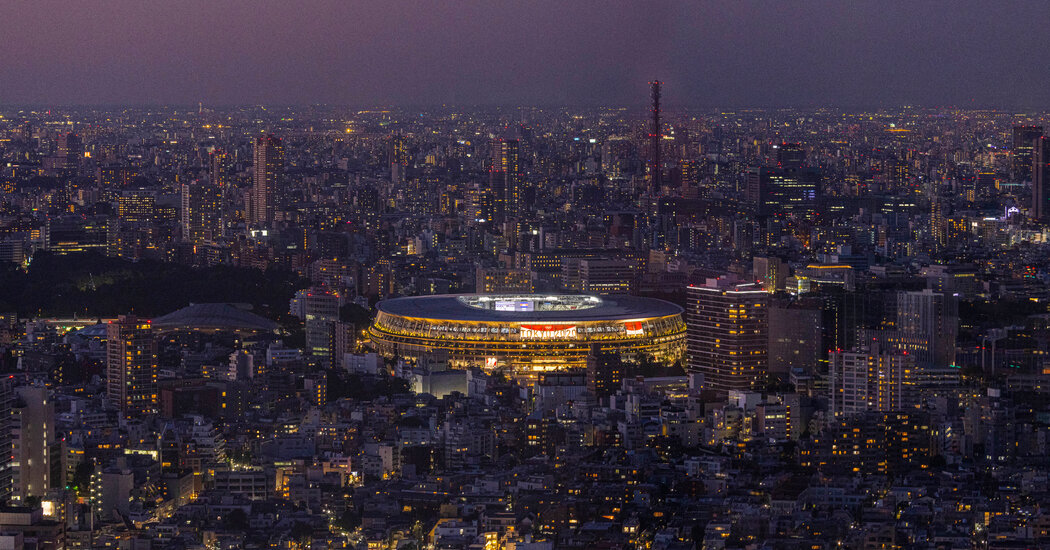 TOKYO — Outside the Tokyo Olympics bubble, the coronavirus situation in Japan has never been worse. Both the city and the country reported record numbers of new infections on Thursday as the Delta variant outpaced vaccinations, straining the health care system.

Inside the bubble, a handful of new cases continue to emerge every day. The most prominent one yet, involving the world champion pole-vaulter Sam Kendricks, came on Thursday, knocking him out of the Games and briefly sending dozens of other athletes into isolation.

All along, Olympic organizers have insisted that these two worlds, inside the bubble and outside, can be kept sealed off from each other, with neither posing a significant risk to the other. But as the Games approach their midway point, the promises of a “safe and secure” Games are being put to the test.

With Tokyo still under a state of emergency, the city reported a record high 3,865 new cases on Thursday. A day earlier, Tokyo had reported more than 3,000 new infections for the first time, warning that the city was running out of hospital beds to treat not only coronavirus patients but those with other medical emergencies, too.

The Japanese Health Ministry announced 9,577 new infections for the whole country on Wednesday, and NHK, the public broadcaster, said that number would most likely top 10,000 for the first time on Thursday.

Olympic organizers insisted that there was no connection between the Games and the rising numbers, saying that the bubble they had created to isolate athletes, coaches, officials and staff from the general public remained intact.

Describing those in the Olympic bubble as the “most tested community almost anywhere in the world,” Mark Adams, a spokesman for the International Olympic Committee, told reporters that the athletes “really are living in a parallel world.”

He said that “there is not a single case” in which athletes or anyone from the Olympic movement had spread the virus to the general public in Tokyo. Just two people associated with the Olympics have been hospitalized, Mr. Adams said, with all others being treated by medical staff within the Olympic Village.

Some who have become infected have described their treatment as less than pleasant. Members of the Dutch delegation, including two athletes, have complained about the severity of their quarantine restrictions. They have described their rooms as “little boxes” and said they were not allowed to see daylight.

Dr. Richard Budgett, the medical director for the Tokyo Games, said the measures were necessary to prevent infection from spreading. “To be in an isolation hotel is really hard however wonderful the conditions are,” he said at a news conference on Thursday. “In the end, under the regulations they have to be isolated, so there is no getting around that.”

Despite the measures, there were signs that the Olympic bubble was more porous than officials have admitted.

Outside Shibuya Station, a tourism hot spot in one of Tokyo’s most crowded neighborhoods, Thay Camargo, 25, who is representing a small Brazilian online broadcasting agency at the Games, said that she was visiting shops and going out at night despite working in Olympic venues every day. Journalists at the Olympics are working under tight restrictions that limit them to their hotels and the competition venues during a 14-day quarantine period.

“I was so excited to have this opportunity to come,” said Ms. Camargo, who said she had finished her 14-day quarantine. “I’ve always wanted to be in Japan and explore.”

She said that she was worried about the coronavirus situation in the city. “I really thought it wouldn’t be this high when I came here from Brazil,” she said. “Brazil is a place where the case numbers are sky high.”

Experts suggested that the presence of the Games in Tokyo was having the psychological effect of making the public believe they could relax, even if under an emergency declaration.

Some restaurants, despite being asked to close by 8 p.m. and refrain from serving alcohol, are openly defying the appeals. At a pub in Shibuya, a sign out front on Thursday night declared: “You can drink here! Open until midnight.” Other bars were hosting Olympics viewing sessions.

Fumie Sakamoto, an infection control manager at St. Luke’s International Hospital in Tokyo, said she saw no concrete indication that the virus was “being transmitted by people coming from abroad to the general public in Tokyo.”

But, she added, “there might be some psychological influence because every day what we see on TV is we watch the Olympic Games, and it’s hard to imagine that we’re in the middle of the biggest wave of infections in Tokyo.”

With Prime Minister Yoshihide Suga tweeting about the Japanese medalists, she said, “it’s sending mixed messages to many of us here in Tokyo and surrounding areas, and it’s really making it hard for us to take the situation seriously.”

Members of the public have thronged the area around the Olympic Stadium, lining up to take photographs in front of a statue of the Five Rings. And spectators lined the route of cycling races over the weekend.

With just a little over a quarter of the Japanese population fully vaccinated, the Delta variant has been able to take root. More than three-quarters of cases in Tokyo are now being caused by that highly contagious version of the coronavirus.

Vaccination rates among older residents are much higher: More than 70 percent of those over 65 have been fully inoculated. As a result, most new infections in Tokyo are among those in their 20s and 30s, whose vaccination rates are much lower.

The failure of Japan to accelerate its vaccination rollout in time for the Summer Games was difficult to comprehend, critics said.

“For a country that was hosting the Olympics and for a prime minister who was gambling his fate on the success of the Olympics,” said Koichi Nakano, a political scientist at Sophia University in Tokyo, “not to be able to vaccinate on time” when other affluent countries had done so “is mind-boggling.”

Although severe cases in which patients require ventilators remain relatively low, the chairman of the Japan Medical Association, Toshio Nakagawa, said that it had become difficult to secure ambulances to transport patients in major cities and warned that hospitals were running out of beds.

And in an interview with Shukan Bunshun, a weekly newsmagazine, Hiroshi Nishiura, an infectious-disease specialist in the medical school at Kyoto University, said that the dearth of hospital beds might make it difficult to stage the Paralympics next month.

The prime minister, Mr. Suga, who is facing an election this year, at first did not acknowledge the rise in infections this week. Then, on Thursday night, he maintained that there was no connection between the Olympics and the surge.

Some in the Japanese public were not buying the sanguine assessments. “Are we going to hold the Olympic Games even if the medical system collapses?” one labor union posted on Twitter. “Medical experts are now working to clean up the mess of #Tokyo2020.”

Mr. Suga asked the public to watch the Games in their homes and said that the government was considering expanding the state of emergency to other prefectures and extending the term in Tokyo after the current expiration date of Aug. 22.

It is not clear that such measures have much effect anymore.

On Thursday night, Aika Suzuki, 22, said that she was planning to meet a friend to go out to dinner.

“I think none of my friends care about the state of emergency anymore,” Ms. Suzuki said. “I have been going out as usual.”

She said she had opposed the Olympics at first, “but now that the events have started and I can watch them on TV with my family, it is exciting.”

“I think that many people feel this way,” Ms. Suzuki added.