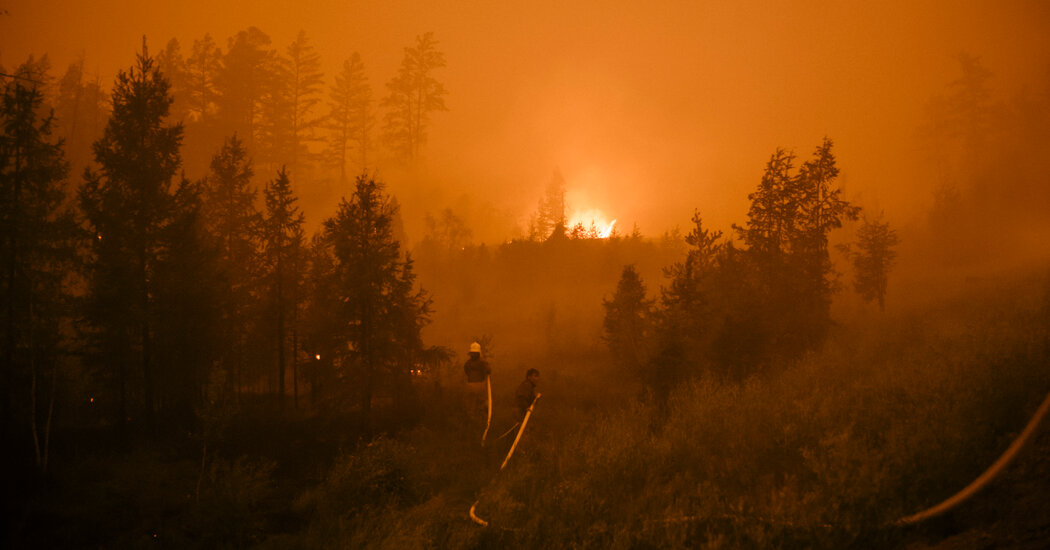 Northeastern Siberia is a place where people take Arctic temperatures in stride. But 100-degree days are another matter entirely.

MAGARAS, Russia — The call for help lit up villagers’ phones at 7:42 on a muggy and painfully smoky evening on Siberia’s fast-warming permafrost expanse.

“We urgently ask all men to come to the town hall at 8,” read the WhatsApp message from the mayor’s office. “The fire has reached the highway.”

A farmer hopped on a tractor towing a big blue bag of water and trundled into a foreboding haze. The ever-thickening smoke cut off sunlight, and the wind whipped ash into his unprotected face. Flames along the highway glowed orange and hot, licking up the swaying roadside trees.

“We need a bigger tractor!” the driver soon yelled, aborting his mission and rushing back to town as fast as his rumbling machine could take him.

For the third year in a row, residents of northeastern Siberia are reeling from the worst wildfires they can remember, and many are left feeling helpless, angry and alone.

They endure the coldest winters outside Antarctica with little complaint. But in recent years, summer temperatures in the Russian Arctic have gone as high as 100 degrees, feeding enormous blazes that thaw what was once permanently frozen ground.

Scientists say that the huge fires have been made possible by the extraordinary summer heat in recent years in northern Siberia, which has been warming faster than just about any other part of the world. And the impact may be felt far from Siberia. The fires may potentially accelerate climate change by releasing enormous quantities of greenhouse gases and destroying Russia’s vast boreal forests, which absorb carbon out of the atmosphere.

Last year, the record-setting fires in the remote Siberian region of Yakutia released roughly as much carbon dioxide as did all the fuel consumption in Mexico in 2018, according to Mark Parrington, a senior scientist at the Copernicus Atmosphere Monitoring Service in Reading, England.

Now, Yakutia — a region four times the size of Texas, with its own culture and Turkic language — is burning again.

On some days this month, thick smoke hung over the capital, Yakutsk, the coldest city in the world, making residents’ eyes water and scraping their throats. Outside the city, villagers are consumed by the battle with fire, shoveling trenches to keep it away from their homes and fields, quenching their thirst by digging up the ice sheets embedded in the ground.

Life here revolves around the northern forest, known as the taiga. It is the source of berries, mushrooms, meat, timber and firewood. When it burns, the permafrost below it thaws more quickly, turning lush woods into impenetrable swamps.

Some forest fires are normal, but scientists say they have accelerated to an extraordinary pace in the last three years, threatening the sustainability of the taiga ecosystem.

“If we don’t have the forest, we don’t have life,” said Maria Nogovitsina, a retired kindergarten director in the village of Magaras, population of about 1,000, 60 miles outside Yakutsk.

As many villagers have done recently, Ms. Nogovitsina made an offering to the earth to keep the fires away: She tore up a few Russian-style pancakes and sprinkled the ground with fermented milk.

“Nature is angry at us,” she said.

For their part, the people of Yakutia are angry, too. They say the authorities have done too little to fight the fires, a sign that global warming may carry a political cost for governments.

Four days of travels in Yakutia this month revealed a near-universal sentiment that the Russian government did not grasp the people’s plight. And rather than accept official explanations that climate change is to blame for the disaster, many repeat conspiracy theories, among them that the fires were set on purpose by crooked officials or businesspeople hoping to profit from them.

“I haven’t seen it, but that’s what people are saying,” Yegor Andreyev, 83, a villager in Magaras, said of the widely circulating rumors of unnamed “bosses” burning the forests to further various corrupt schemes. “There’s no fires in Moscow, so they couldn’t care less.”

In Magaras, Mayor Vladimir Tekeyanov said he was applying for a government grant to buy a drone, GPS equipment and radios. Riding a bulldozer through the charred woods outside the village, a forest ranger, Vladislav Volkov, said he was blind to the extent of the fires because of a lack of aerial surveillance. It was only when he retrieved a broken-down tractor left behind a few days earlier that he discovered a new fire raging in the vicinity.

“The fire doesn’t wait while you’re waiting for spare parts,” he said.

Russia, in some ways, might benefit from climate change because warmer weather is creating new fertile territory and is opening up the once-frozen Arctic Ocean to greater trade and resource extraction. But the country is also uniquely vulnerable, with two-thirds of its territory composed of permafrost, which warps the land, breaks apart roads and undermines buildings as it thaws.

For years, President Vladimir V. Putin rejected the fact that humans bear responsibility for the warming climate. But last month, he sounded a new message in his annual call-in show with the Russian public, warning that the thawing permafrost could lead to “very serious social and economic consequences” for the country.

“Many believe, with good reason, that this is connected primarily to human activity, to emissions of pollutants into the atmosphere,” Mr. Putin told viewers. “Global warming is happening in our country even faster than in many other regions of the world.”

Mr. Putin signed a law this month requiring businesses to report their greenhouse gas emissions, paving the way toward carbon regulation in Russia, the world’s fourth-largest polluter. Russia hosted John Kerry, President Biden’s climate envoy, for talks in Moscow this week, signaling it is prepared to work with Washington on combating global warming despite confrontation on other issues.

Yet Russia’s fight is running up against familiar banes: rigidly centralized government, a sprawling law enforcement apparatus and distrust of the state. As the wildfires spread in June, prosecutors launched criminal investigations of the local authorities for allegedly failing to fight the fires.

“The people who were occupied with fighting forest fires were close to getting arrested,” said Aleksandr Isayev, a wildfire expert at the Russian Academy of Sciences in Yakutsk. “Their activities were put on hold.”

Then, earlier this month, people in Yakutia were furious after Russia’s Defense Ministry sent an amphibious plane to Turkey to help the geopolitically pivotal country battle wildfires. It took another five days until the Russian government announced it was sending military planes to fight fires in Yakutia as well.

“This means that Moscow hasn’t noticed yet,” said Aleksandr N. Fedorov, deputy director of the Melnikov Permafrost Institute in Yakutsk, in an interview before Russia sent planes to region.

One recent Friday evening, volunteers in the village of Bulgunnyakhtakh, south of Yakutsk, piled into trucks and an open trailer and bumped through the mosquito-infested forest for two hours. They filled up water trucks at a pond and drove to a cliff side overlooking the majestic Lena River, where they realized they had gone the wrong way: The fire was in the valley down below.

Some of the men clambered down the slope, while others tried to connect fire hoses together to reach them.

“There’s no firefighters here,” one man muttered. “No one knows how to use these things.”

Working through the light northern night with backpack pumps, the volunteers appeared to be containing the small fire, which they had feared could threaten their village. But to Semyon Solomonov, one of the volunteers, one thing was clear: Any victory over the ravages of the changing climate would be temporary.

“This is not a phase, this is not a cycle — this is the approach of the end of the world,” Mr. Solomonov said. “Mankind will die out, and the era of the dinosaurs will come.”

Fauci Says U.S. ‘Probably Would Still Have Polio’ If There Had Been As Much Misinformation As With Covid Vaccines Now

Fauci Says U.S. ‘Probably Would Still Have Polio’ If There Had Been As Much Misinformation As With Covid Vaccines Now