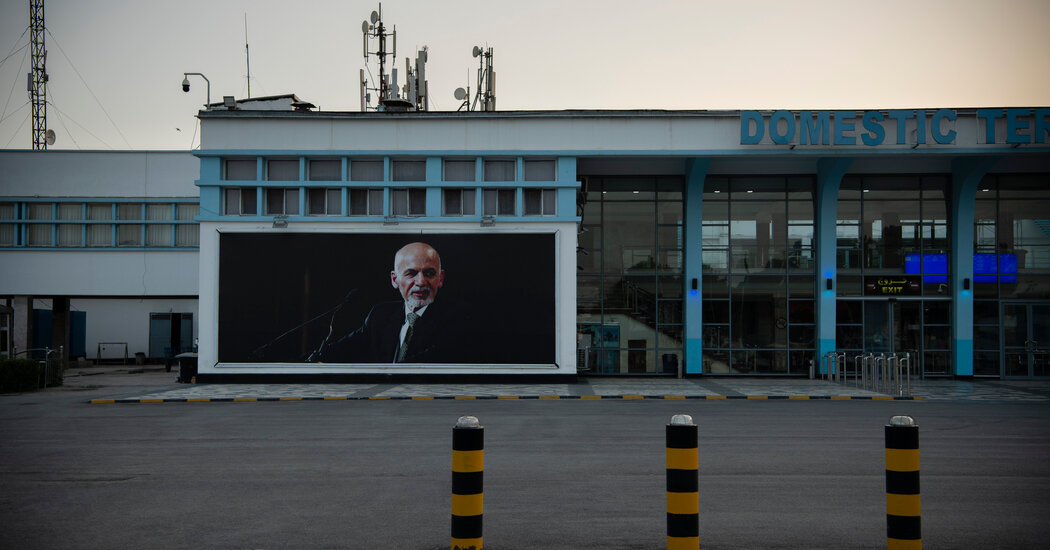 But after fleeing the Taliban’s advance into Kabul this weekend, Mr. Ghani — wherever he is — is stepping into a far less welcome role: That of a failed leader whose hasty escape from Kabul scuttled negotiations to ensure a smooth transition of power to the Taliban and left his own people to deal with the deadly chaos and frightening uncertainty under the country’s once and future rulers.

As of Monday, it was not even clear where Mr. Ghani was or would end up living. Close aides could not be reached by phone. Some reports suggested that he had gone to neighboring Uzbekistan or Tajikistan or perhaps even Oman. There was talk that Saudi Arabia had agreed to give him asylum, and rumors that he had been accompanied by as many as 200 aides, ministers and Parliament members.

There were also reports that Mr. Ghani had fled with piles of cash, and questions about whether the United States played any role in his departure.

It was an ignominious turn for the World Bank-trained technocrat who holds a doctorate from Columbia University and, as he often reminded people, wrote a book titled “Fixing Failed States.”

Instead of fixing Afghanistan during his nearly seven years in power, Mr. Ghani fled much the way he governed: isolated from all but a handful of advisers who are said to have departed with him.

The fallout was swift, as what semblance of civil government that was left in Kabul melted away and thousands of Afghans stormed through Kabul’s international airport — the city’s sole connection to the outside world — desperate to find a way out. But unlike Mr. Ghani, almost all of them had no chance of getting out, and several people died in the chaos.

Mr. Ghani, 72, defended his decision to bolt in a social media post late on Sunday, writing from an undisclosed location that, “If I had stayed, countless of my countrymen would be martyred and Kabul would face destruction.”

Others, though, condemned his flight as a desperate act of self-preservation by a man whose failures had paved the way for the Taliban’s return nearly 20 years to the month after the American-led invasion that led to their ouster following the Sept. 11, 2001 attacks.

“He will be known as the Benedict Arnold of Afghanistan. People will be spitting on his grave for another 100 years,” said Saad Mohseni, who owns one of Afghanistan’s most popular television stations, Tolo TV.

Mr. Mohseni was part of a last-ditch effort to save Kabul from a violent and bloody takeover by the Taliban, working with former president Hamid Karzai and others to negotiate an interim arrangement that would give the Taliban a week or two to take the reins of Afghanistan’s government.

The effort collapsed once word got out that Mr. Ghani had fled, whereupon the Taliban began moving into Kabul in force. Some were even pictured sitting at the same desk from which Mr. Ghani had only days ago tried to rally his faltering military to resist the Taliban.

“He’s a coward, and him leaving this vacuum is the reason why we have what we have today,” Mr. Mohseni said in a telephone interview from London. “The scenes at the airport and people getting killed are his doing.”

One of Mr. Ghani’s former minister’s was similarly blunt, writing in a text message, “I wonder how he can live with such betrayal of his people.”

Mr. Ghani’s time in power in many ways came to mirror the failed international effort to rebuild Afghanistan into a modern state with regular elections, a Western-style financial system and a military built on an American model. The latter was a pricey endeavor, heavy on logistics and advanced weaponry in a country with little expertise in either one. Like that effort, Mr. Ghani’s approach faltered time and again.

He was a policy wonk at heart who had a penchant for conducting small talk in a vernacular best described as technocratese (think phrases like “consultative processes” and “cooperative frameworks”). It made him a successful finance minister in the years after 2001 and a darling of Western officials. He was looked to hopefully as the man who could clean up Afghanistan’s corrupt and often nonfunctional government after he was declared the victor of a highly disputed election in 2014.

Mr. Ghani, too, insisted that his reasoned analyst’s approach would overcome centuries of ethnic division, spoils-seeking and tribal hatred in Afghanistan’s politics. Yet he at times also sought to play the populist, talking tough about American interference in his country and sometimes showing up at rallies clad like a village chief in a heavy turban and thick robes that dwarfed his slight frame. He embraced warlords he had once insisted Afghanistan needed to be rid of if it was to flourish, and he took anger management classes to get his temper in check.

But as the years in power wore on and turmoil festered, and the government failed to bend to his intellect, he isolated himself in Kabul’s sprawling presidential palace, rising at 5 a.m. to read 600-page reports, bringing to bear his training as an anthropologist.

While no one doubted Mr. Ghani’s own firmly held conviction about his outsized intellect, it did little to help him manage the endless palaver of Afghan politics with its power brokers, ethnic divisions and reliance on outright bribery to get things done. His temper and tendency to lecture did not make matters any better.

He neglected his American-backed army, leaving its soldiers in the field hungry; the military turned out to be a mere facade, crumbling as soon as the Taliban exerted pressure. He treated warlords who could have fought for him with contempt and condescension; they, too, put up little resistance as the Taliban swept across Afghanistan.

He micromanaged the military and civil command structure, replacing competence with personal loyalty. Critics accused Mr. Ghani, an ethnic Pashtun, of alienating Afghanistan’s other, less numerous ethnic groups. He turned his back — at best — on reports of corruption in the upper echelons of his administration, allowing to flourish the same kind of graft that he had promised to clean up.

On his way out Afghanistan, he may have indulged in it himself: Russia’s embassy in Kabul said on Monday that “four cars were full of money” as Mr. Ghani’s entourage fled, the Russian news agency RIA reported.

Perhaps most disastrously over the last year was Mr. Ghani’s handling of his top military leadership, leaving in office a defense minister so crippled by injuries from a suicide bomb he could hardly function. He was finally replaced in June, but with a grizzled veteran from another age of combat.

His temper flared continuously. Cabinet ministers described a president given to shouting at them during meetings, publicly humiliating those he needed to work with.

“He had an Afghanistan in his mind that existed in the briefings he got,” said Khalid Payenda, his former finance minister, who left the country eight days ago.

Right up until the end, even as his country was falling apart around him, Mr. Ghani was holding meetings in which he rode his favorite hobby horses: the “digitization” of the country’s finances and reforms in the attorney general’s office.

In the meantime he nurtured a curious substitute for his lack of popularity: a personalization of power in which images of his bald pate were plastered everywhere in the capital. The Afghan public gave no evidence of subscribing to the image Mr. Ghani attempted to project of himself: an omniscient public servant bound to make the wisest choices for his constituents, because of his sizable intellect.

It was a tone-deaf tack for a man whose two electoral “victories” were marred by widespread fraud. In both instances, American officials had to intervene to preserve at least the appearance of democratic legitimacy.

Yet for all his smarts, Mr. Ghani often displayed a remarkable lack of self-awareness. As his statement defending his decision to flee as an act of noble self-sacrifice spread among Afghans, a clip from a television interview he did with the BBC in 2016 also began making the rounds on social media.

Asked about the tens of thousands of Afghans who were then fleeing to Europe, he said they were impoverishing their families and undermining Afghanistan’s future.

“I have no sympathy,” he said.