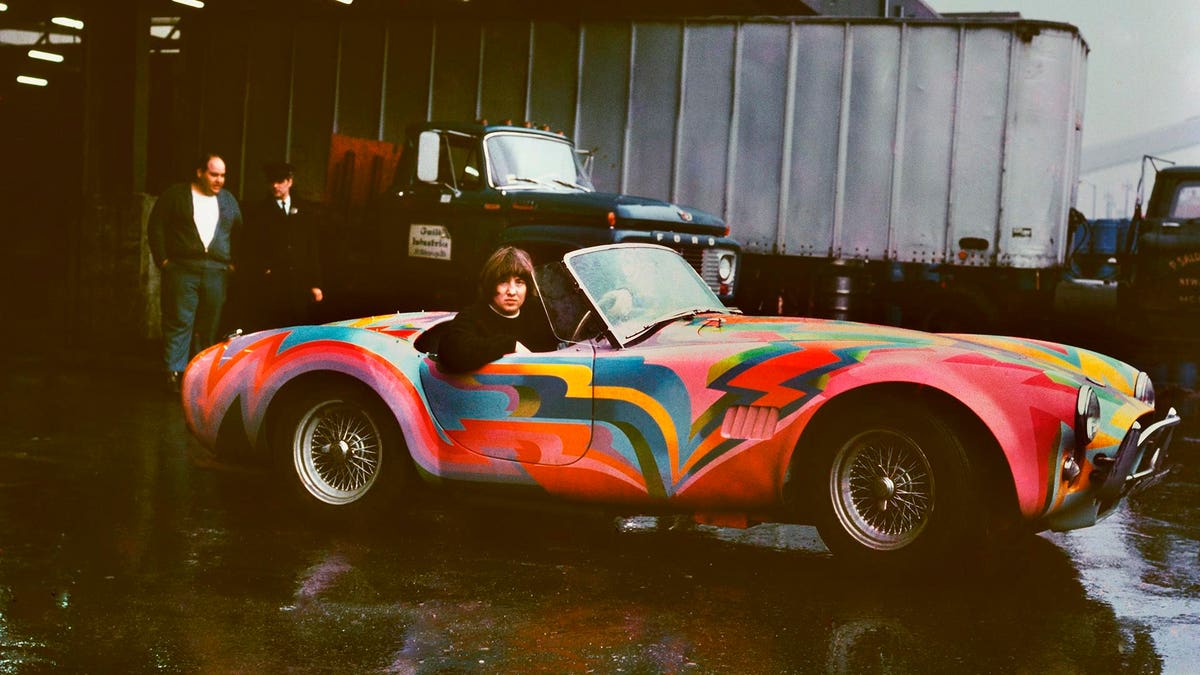 Electric cars have a bit of a problem. Apart from the torque and acceleration compared to internal combustion, they can be a bit boring. Tesla may lead the competition in key areas of technology, but what if all your friends have one too? This is what AVA hopes to combat in a series of electric car conversions that it calls its Signature range. Each one has a unique design and a story behind it, and some are even works of art.

The headline act is a reimagined electric AC Cobra. This Cobra is inspired by the one formerly owned by Guinness heir Tara Browne that was an icon of 1966 Carnaby Street Swinging London. Aside from being an impressively quick vehicle of its era, the Cobra was unique due to its multicolored paint job by Dudley Edwards of Binder, Edwards and Vaughn (BEV) Design, described as “LSD on wheels”. Dudley Edwards is also famed for painting Paul McCartney’s “Magic Piano”, with a similarly colorful appearance.

The Cobra car was considered so artistic that it was displayed at the Robert Fraser Gallery on Duke Street in Mayfair. However, there is also a tragic background to this vehicle, because its owner died young in 1966, just a few months after his Cobra’s inception. In fact, Tara Browne’s death in a crash in his Lotus was so infamous at the time that it became the inspiration for a verse in The Beatles’ song “A Day in the Life”. The line “He didn’t notice that the lights had changed” describes the circumstances of the accident.

AVA is not converting the original Cobra chassis, however. Norman Crowley, AVA’s founder, says that they didn’t want to trash the original vehicle. But Dudley Edwards has been enlisted to reinstate the multicolored paint on the new vehicle. It may be the last major artwork Edwards does, and it’s fitting that this former member of BEV Design is painting a Battery Electric Vehicle (BEV).

The electric Cobra is a significant upgrade. The original car was a Mark 3 289, with a 4.7-liter V8 producing 271bhp and a 0 to 60mph sprint time of 5.6 seconds – incredibly quick for 1966. The new AVA version will initially sport only a 20kWh battery to save weight and have a 60mph sprint time of well under 3 seconds. This car will be unveiled at Salon Privé in London in September, before heading to London Fashion Week (yeah, baby!) and then over to the US for New York Fashion Week before being auctioned in the fourth quarter of 2021. The final version will have a much larger 80kWh battery and a range over 200 miles, although the extra weight will add about half a second to its sprint speed.

AVA also has a series of Signature Land Rover Defenders in the pipeline, starting with the “Croxford Defender”. The story behind this and further cars in this series is that each one is inspired by the story of an injured military veteran. The Croxford Defender is inspired by Stuart Croxford, who lost a leg in Afghanistan, but has gone on to set up his own business and even complete an Iron Man competition.

The Croxford Defender taking its lead from his story is an absolute beast. Norman Crowley claims it will be the longest range, highest performance electric Defender ever built. Despite weighing around three tons, it’s so powerful that it can sprint to 60mph in 4 seconds. It is equipped with a huge 200kWh battery, which should deliver over 400 miles of range. It has “Wolf” Defender handles like the military versions of the car, and the same front grille. However, the bonnet will be made from carbon fiber, with the interior upholstery color scheme echoing Croxford’s medals.

This Defender will be part of a series of five cars, with each one personalized around the story of a different military veteran. AVA expects each car to sell for around £450,000 ($626,000). Veterans are employed in the creation of the vehicles, and some of the proceeds from sales will be donated to a wounded veterans’ charity.

A second Defender conversion by AVA is inspired by endurance swimmer and UN Patron of the Oceans Lewis Pugh. This will have flared wheel arches created from reclaimed ocean plastic, left in their original color to show the origin of the material. The seats will be constructed of man-made fiber and upholstered with “Vegan leather”. The interior trim will be carved from driftwood.

The aim with this set of five cars is to achieve the lowest carbon footprint of any vehicle ever built. So the donor vehicle will be an existing 2014 or 15 Defender, and the batteries will be repurposed from Teslas crashed in Norway (for some reason – do they have trouble with the power on icy roads?). The four hub-based motors will have a party trick up their sleeve, too, as their ability to be driven independently enables a “tank turn”, where the wheels go in opposite directions on each side so the car can rotate 180 degrees on the spot. These cars will be built in collaboration with Dutch company The Landrovers. The proceeds from selling these vehicles will partly go to towards cleaning up the world’s oceans.

None of these vehicles will be cheap. But Norman Crowley explains that the market for these kinds of conversions has proven to be larger than might previously have been predicted. For this reason, AVA also has a share in more mainstream EV converter Electric Classic Cars, which can deliver electric cars for less than six figures, although still not cheap. But lots of people seem to think they are worth the money. After all, if you’re down the pub in your Bentley Continental, the guy who arrived in the Croxley Defender – or a crazy multicolored electric AC Cobra – is going to have much more to talk about. He or she can also do so with their environmental credentials intact.