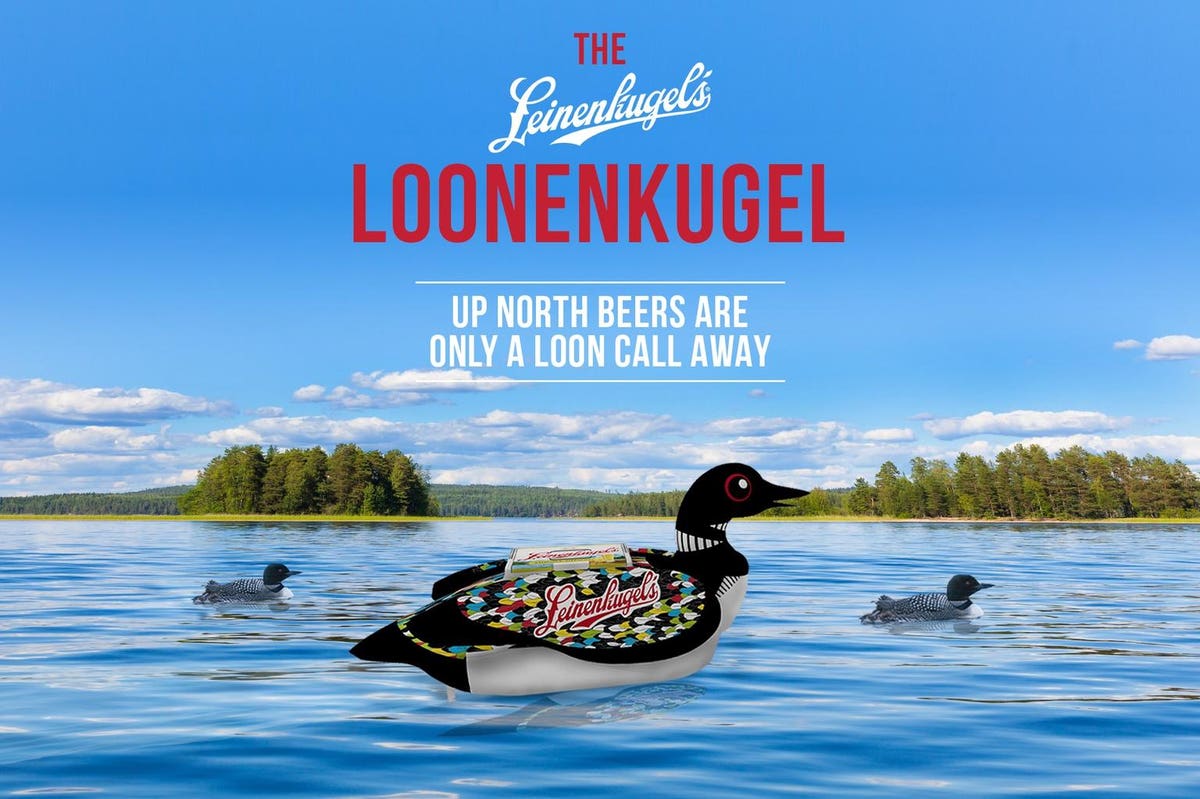 So, your friends all think you sound like a loon? Well, your imitation of this Midwestern bird could be worth beer and something even more special.

Leinenkugel’s is offering the best imitator of a loon call a Loonenkugel through a new promotion just announced today. What’s a Loonenkugel? It’s a robotic, motorized “cooler-meets-float” that can deliver you beer.

“Every year, we see more and more crazy designs for giant, inflatable water floaties,” says Crystal Hubert, associate marketing manager of Lenenkugel’s. “So, this summer, Keinenkugel’s joined in on the fun with our own, Midwestern take – the Loonenkugel.”

The Loonenkugel, she says, is “designed for you to live your best life at the lake,” and it’s in homage to “the unofficial mascot of the Great Lakes, the loon.”

“The Loonenkugel has a Summer Shandy cooler in its body, and it will deliver you ice-cold, Summer Shandy right to you so you don’t have to interrupt time on the lake by going back to the dock to stock up,” Hubert says. It will be a lot more useful than, say, a giant slice of pizza inflatable.

“As a Wisconsin brewery, we know how special Midwestern summers at the lake are,” she adds. “From pontoon tie-ups, sunsets on the dock and the enchanting call of a loon, these moments make like just so great, especially with a Summer Shandy in hand.”

The Summer Shanty, the beer this device is specifically designed for, is only released during the summer months, and at the end of summer, the beer goes in hibernation until the weather warms up again.

The Loonenkugel is valued at $20,000, and it is designed to keep a 12-pack ice cold while paddling it across a lake via remote control. The Loonenkugel can also be used in pools, but it’s designed especially for lakes, where Midwestern loons can be found.

One lucky – and loony – winner will also receive Summer Shanty for a year, which will be awarded via a cash pay app. “We created the Loonenkugel to help (one lucky consumer) make the most out of precious summer months at the lake,” Hubert says. “Now, anyone can feel like they’re sipping a beer in the Northwoods at the simple call of a loon.”

This promotion follows last month’s “docs for docks “— a simple trade of screen time for time by the lake this summer. The brewery rewarded 15 lucky fans with $4,000 towards a lakeside retreat by submitting how many hours they spent streaming the past year.

The loon call contest starts today, and loon calls will be accepted through August 9.  To enter, consumers can email loon@promo.leinie.com and send Leinenkugel’s an audio file of your best loon call impression and a panel of Midwestern loon enthusiasts will choose one person to win the Loonenkugel plus Summer Shandy for a year. If your loon hoot didn’t make the cut for the grand prize, you could still be in the running to win an adorable mini version of the Loonenkugel that will hold a can or bottle of Leinenkugel’s to accompany you on the lake. Your audio clip must not exceed 30 seconds, and must be in one of the following file formats: MP3., MP4., or WAV.

Loons are aquatic birds, which are known for their beautiful, almost eerie-sounding calls. Among such loon calls, there are a tremelo, a yodel, a wail and a hoot. If you haven’t heard one yourself, you can learn more about their specific calls here.

These aquatic birds, however, are well-known in Wisconsin, where Leinenkugel’s is based – there’s even a talented synchronized swimming team called the Wisconsin Water Loons.

“As a 154-year-old Chippewa Falls, Wisconsin-based brewery, we’ve heard our fair share of loon calls so we’re excited to hear some renditions from our fans,” Hubert says.