Belarus Leader Lashes Out at the West, a Year After Crushing Protests 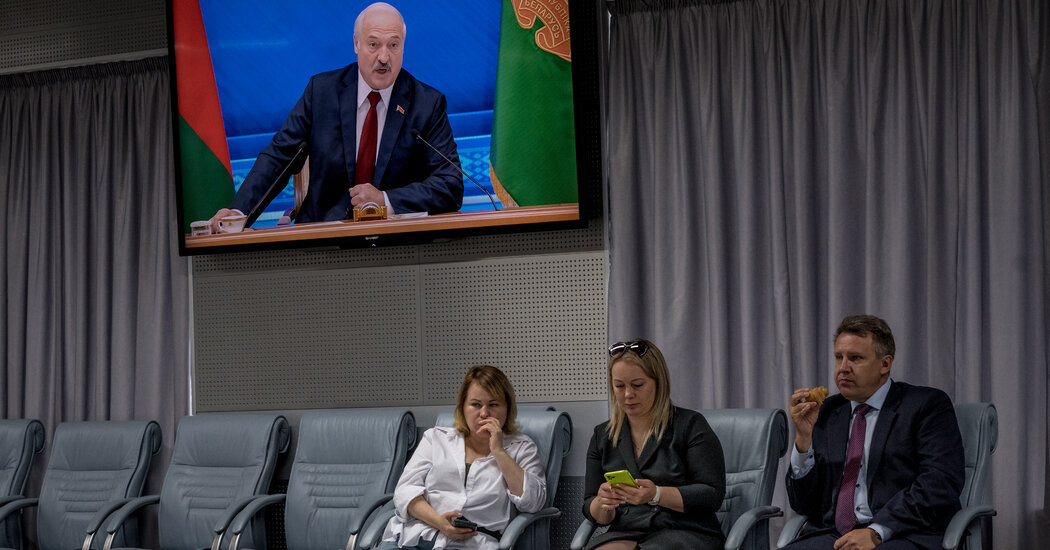 The U.S. Treasury Department on Monday added 27 individuals and 17 entities to the list of those under sanctions, which drain the country’s export revenues. Last month, President Biden met with Svetlana Tikhanovskaya, Belarus’s unlikely opposition leader, who was forced to flee the country shortly after claiming victory in the presidential election.

Over the years, Mr. Lukashenko has performed a balancing act with his foreign policy, playing the West off against Russia in an effort to preserve his independence while extracting economic succor from both. But Mr. Putin’s support during the protests — including a veiled threat to intervene militarily if necessary — was a critical lifeline for Mr. Lukashenko. Western sanctions have been pushing Mr. Lukashenko even closer to Mr. Putin.

But during the news conference, billed as “the big conversation with the president,” Mr. Lukashenko portrayed Russia and Mr. Putin as more dependent on Belarus than vice versa. He asserted that Belarus, which borders Poland and the Baltic States, both NATO members, is Russia’s last bulwark against the West.

Following that line of argument, he insisted that the protests against him last year were caused by Western countries seeking to attack “the heart of Russia” by fomenting unrest in Belarus.

“Together with the Russian president, we immediately realized what they wanted from us,” he said.

Today, his protestations notwithstanding, Mr. Lukashenko’s rule hangs on his personal relationship with Mr. Putin, said Katia Glod, an analyst with the Center for European Policy Analysis. At any moment, Mr. Putin can “make some other decision,” regarding the Belarus leader, she said, for instance “push him toward a referendum” on a new constitution and resignation.

While allowing during the news conference that Belarus is in talks with Russia on another $1 billion loan, Mr. Lukashenko insisted that his country would remain independent and never merge with Russia.