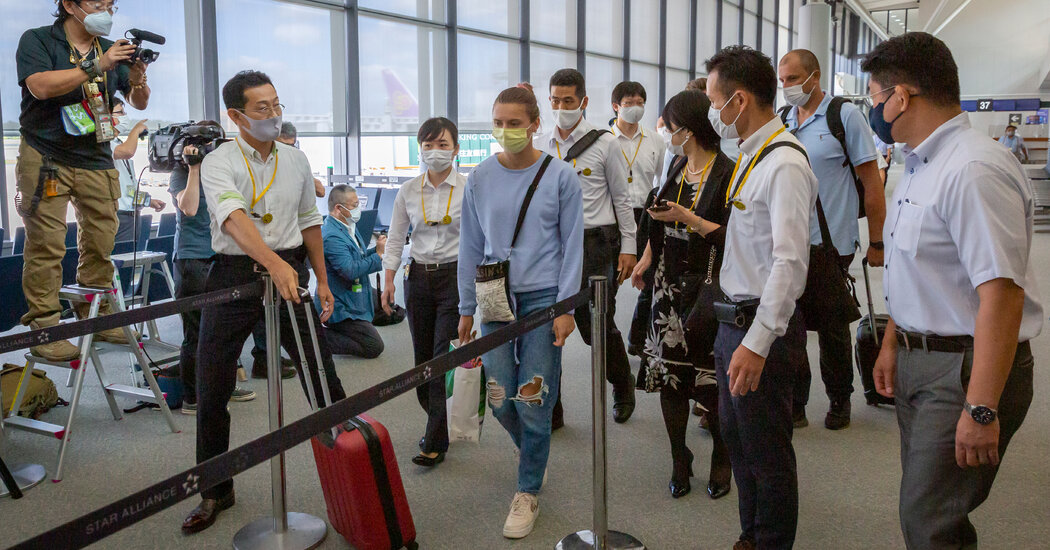 When Belarusian Olympic officials came to Kristina Timanovskaya’s room after the sprinter complained publicly about her coaches, the head of the national team made it clear they had an order for her to return home — and it came from the top.

That’s because, like much else in Belarus, sports is a family-run business. That family belongs to President Aleksandr G. Lukashenko, who has held sway with authoritarian power in the Eastern European country for 27 years.

Ms. Timanovskaya refused and defected in an Olympic scandal reminiscent of the Cold War. On Wednesday, she arrived in Poland, which had offered her and her husband political asylum.

Her situation, though, has shed light on an anachronistic dictatorship where no sphere of life can evade politics, and the ruling family increasingly cracks down ruthlessly on any whiff of dissent.

If not for the drama, it’s likely few interested in the Olympics would have paid much attention to Belarus, which, unlike the old Soviet Union to which it once belonged, is hardly a gold-medal powerhouse. But the defection has drawn global attention to yet another of the many ways the Lukashenko family wields its power: sports.

“For Mr. Lukashenko, sports is a propaganda tool just as it is for any dictator in any totalitarian system,” said Aleksandr Opeikin, the executive director of the Belarusian Sports Solidarity Fund, a group that opposes the government.

“Lukashenko always perceived the awards of athletes, medals of athletes at the Olympics, as his own medals.”

But if the use of sports as a propaganda tool has a long history, so do the embarrassing defections that have punctured the aura of invincibility carefully cultivated by authoritarian governments.

Dozens of Hungarian athletes refused to return home once they arrived in Australia for the 1956 Olympic Games and learned how the Soviets had invaded their country to crush a mass uprising against Communism. At least four Romanians and a Russian defected during the 1976 Summer Olympics in Montreal, along with scores of others through the 1970s.

After her arrival in Tokyo, Ms. Timanovskaya took to Instagram to criticize her country’s Olympic delegation, which had added her to a relay at the last minute without informing her.

But if Mr. Lukashenko took the criticism personally, it is because his family’s control of Belarus’s sports complex is absolute, recalling Saddam Hussein, the Iraqi dictator who had appointed his son Uday as the head of their Olympic Committee in 1984.

While Saddam had Uday, Mr. Lukashenko has Viktor, his 45-year-old son, who looks like a younger version of his father. An enthusiastic motorcyclist, he is often seen in Minsk, Belarus’s capital, at the head of parades of Harley Davidson motorcycles, at which he consorts with security officials and key personalities in the government.

Viktor took up the reins of Belarus’s Olympic Committee in February, after his father had run it for 27 years. Human rights campaigners have accused father and son of being directly implicated in Ms. Timanovskaya’s treatment in Tokyo.

Mr. Opeikin said that if Ms. Timanovskaya had returned to Belarus, she would have likely been punished.

“I can argue that with a very high degree of probability that she would be sent to prison, tortured, deprived of sleep and would not be given food and water,” he said in a phone interview from Vilnius, Lithuania, where he fled after last year’s disputed election.

No presidential vote in Belarus has been judged by international observers as free and fair since 1995. But after elections last August, 200,000 protesters rallied in Minsk to protest a vote they said was rigged, and Mr. Lukashenko cracked down hard. Since then, 35,000 people have been arrested. Athletes were not spared.

In August 2020, more than 1,000 athletes, including Olympic medalists, signed an open letter calling for new elections and for an end to the torture and mistreatment of peaceful protesters. (Ms. Timanovskaya was not one of them.)

“Sixty of those signatories were dropped from the national team, lost their funding, were forced to recant or were physically abused,” said Oksana Pokalchuk, the executive director of Amnesty International Ukraine, which has been documenting abuses by Mr. Lukashenko’s government against athletes.

Some of them were Olympic medalists, like Aleksandra Gerasimena, a swimmer who won a bronze medal in 2016. Today she is director of the Belarusian Sport Solidarity Fund, or BSSF, an organization founded last August to support athletes punished by the regime.

To date, Ms. Pokalchuk said, 95 athletes have been detained for taking part in peaceful protests, seven have been charged with political offenses, and 124 have suffered other forms of repression.

“These decisions that affect the image of the country, such as Timanovskaya’s exclusion from the Olympic Games, cannot be made without Lukashenko’s knowledge and approval,” Ms. Pokalchuk said. “He tries to keep an eye on everything that can at least marginally diminish his position.”

With this in mind, the Belarusian Sport Solidarity Fund appealed to the International Olympic Committee, which in November decided to bar Mr. Lukashenko, his son Viktor, and Dmitri Baskov, another executive board member, from attending any Olympic events. It also suspended funding to Belarus’s national Olympic committee, paying scholarships directly to the athletes themselves.

A number of athletic competitions were postponed or relocated from Belarus subsequently, though many organizers cited the Covid-19 pandemic rather than political repression as the reason. But the government saw critics who needed to be silenced.

In April, the Belarusian authorities charged Ms. Gerasimenya and Mr. Opeikin with “disseminating deliberately false information” accusing them of “appealing to foreign states and international organizations to take actions aimed at causing harm to the national security of the Republic of Belarus.”

The charges, which include damage to the country’s “prestige in the international and political arena,” carry a potential punishment of five years in prison.

The crackdown on athletes has had consequences for Belarusian sport. At the 2016 Summer Olympics in Rio, Belarusian athletes brought home one gold medal, four silvers, and four bronzes. Some were won by athletes who are now in exile. This year, Belarus has won only one gold medal and one bronze.

“This testifies to the fact that the sports system in Belarus does not work anymore,” Mr. Opeikin said. “This is because professional personnel, due to their criticism of Lukashenko, either left the country or were fired from their posts, and now there are a huge number of nonprofessionals in sports.”

“Since resources are not spent on the development of sports, but on the support of simply loyal athletes, and for the preservation of this showcase, the system is crumbling in this way now,” Mr. Opeikin said. “That’s why what happened happened, and now the whole world found out about it.”

In a recording of their conversation with Ms. Timanovskaya, both national team head coach Yuri Moisevich and Belarusian Republican Track and Field Training Center deputy director Artur Shumak seemed unnerved by a possible reaction from above.

Mr. Moisevich can be heard saying, as he tries to pressure Ms. Timanovskaya to return home, that he’s not scared for himself “but for the team and for the entire situation here.”

“I’m in my 60s — I don’t scare anymore, but one of these tin soldiers will show up and say, ‘Sir, yes, sir! Awaiting orders!’ And he’ll purge the national team so bad that there’ll be nothing left of us. Then you’ll go down in history — they’ll say it all started with Timanovskaya. She started this whole mess, and then they changed the leadership to put things in order.”

In a recent TV appearance, President Lukashenko seemed to put the blame on the coaches.

“This is anger, I’m talking about sports, because we are all sitting, watching the championship,” he said. “Some countries I will not name, three to five times smaller than ours, have gold medals. And we are all glad that we got to the final … But here we need to sort it out with the coaches. The first fault is the coach.”

Mr. Opeikin wondered aloud if the leadership of the team would also choose not to return to Belarus once the Tokyo Games are over.

“I know that the Belarusian delegation is now also very afraid and I do not exclude that by the end of the games they will also refuse to fly to Belarus,” he said. “They understand what could happen to them, that they will be fired or they will be interrogated in prison. They do not rule it out anymore.”