Best Bollywood Motivational Movies That Will Change Your Life 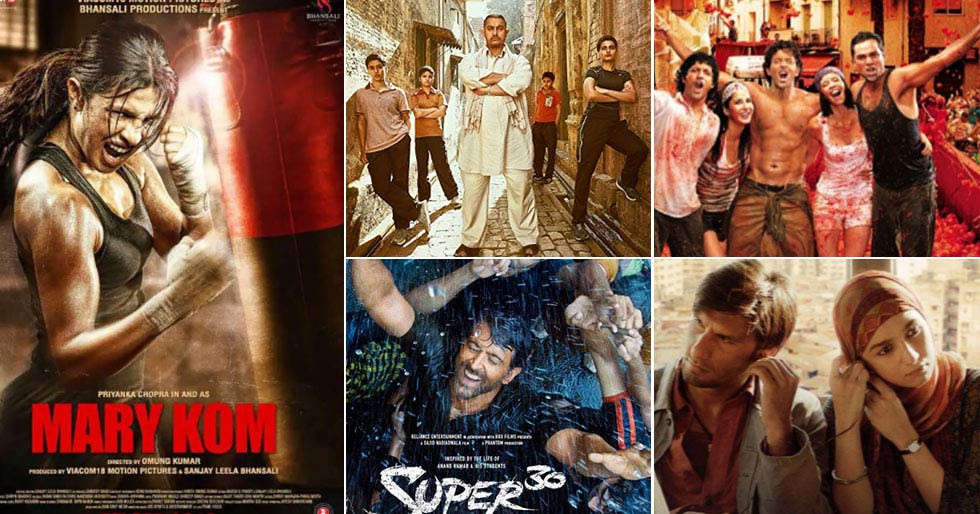 Films make us feel so many emotions, they inspire us to not give up on our dreams and work harder everyday, they give us a message to live life to the fullest and that’s exactly what we love about them. Bollywood has a long list of such movies, and to make you feel a little motivated today we list some of the best motivational movies made in the decade. So if you’re feeling a little demotivated today scroll through, watch one of these films and thank us later.

Released in 2013, Bhaag Milkha Bhaag is based on the real-life of the ‘Flying Sikh’, late Milkha Singh starring Farhan Akhtar, the film directed by Rakesh OmPrakash Mehra talks about how Milkha Singh overcame the loss of his family due to the partition and homelessness to become the country’s best athletes. The film is all about dedication, discipline and hard work and gives us an important message to never give up. Farhan’s transformation both physically and mentally was quite commendable. This film leaves us full motivated everytime we see it and is one of the best sports biopics ever made.

One of the best films of 2016, Starring Amir Khan, Fatima Sana Sheikh and Sanya Malhotra, the movie is based on ace wrestlers Geeta Phogat and Babita Phogat. Even though the film starred Amir Khan in it we have to say that the girls stole the show with their brilliant acting skills. The story revolves around how Mahavir Singh Phogat (Amir Khan) wants boys in his family to train them to make great wrestlers but gets disappointed when he doesn’t have any son. But he soon realizes that his girls are capable of wrestling as it’s in their blood. He then trains them to become top women wrestlers of the country. The film is all about women power and how people need to change their thinking that girls can only do household work.

Directed by Gauri Shinde, starring the talented Sridevi, English Vinglish gives the audience a very important message. The film revolves around Shashi (Sridevi) a homemaker who is looked upon by his family and society because she doesn’t know how to speak English fluently. But her life changes when while visiting her family in the US she decides to enroll in English speaking classes. There she meets a bunch of people just like her and they make her realize that she must value herself and not think about the narrow perspective created by society. This film gave a great message about valuing yourself before anything else and that’s what touched the audience and gained so much love.

Gully Boy is a movie one should watch once in a lifetime. From the storyline, cast to the dialogues and songs this film is truly a masterpiece. Directed by Zoya Akhtar, starring Ranveer Singh, Alia Bhatt and Siddhant Chaturvedi, the film revolves around Murad (Ranveer Singh) who lives in the Mumbai slums and dreams of becoming a rapper. The film gives a strong message of how people are not allowed to dream because of society, but what really helps you fly is a little courage. And of course Ranveer has done a fantastic job in his parts in the song ‘Apna Time Aayega’. If you fear dreaming big go watch Gully Boy.

As the name of the movie suggests, the film is based on ace Indian boxer MC Mary Kom. The movie talks about how Mary Kom started her career and how she faced issues in her life and the way she overcame them. Starring Priyanka Chopra, the film is a really strong woman centered film and shows how Mary Kom being an Olympic medalist boxer balanced her ever growing career, marriage and motherhood. With endless training Priyanka really proved that she can play any role with so much ease and definitely knows how to get into the soul of every character. This is a must watch for anyone who is trying to balance things in life.

Pad Man gives an important message to the society about women’s sanitary conditions in the country. Directed by R Balki, starring Akshay Kumar, Radhika Apte and Sonam Kapoor, the film was really inspirational and was put together well. The story revolves around Laxmikant (Akshay Kumar) and his journey of making pads for his wife who uses unhygienic cloth during her periods. Thereafter he makes a machine which can make affordable sanitary pads and how he raises awareness about the same. The film really did a great job with raising such an important and sensitive issue.

‘I am a mother and the mother has no dreams.’ This dialogue from the film Panga truly describes the life of every woman who forgets her dreams just to take care of her family and kids. The story is based on the life of a national level Kabbadi player, who gives up her career to raise her family but decides to go back to living her dream with the help of her family. The story breaks all age stereotypes and Kangana played her character effortlessly.

Starring Hrithik Roshan, the film revolves around Anand Kumar (Hrithik Roshan) a mathematics genius who gets a chance to visit Cambridge University but due to financial problems he isn’t able to. He then starts teaching at a coaching centre but soon realizes that he needs to teach kids who aspire to join IIT but don’t have the finances to enroll in coaching centers and he then starts a training program called Super 30. The film is gripping and will take you through a roller coaster ride.

Directed by Zoya Akhtar, starring Abhay Deol, Farhan Akhtar, Hrithik Roshan, Kalki and Katrina Kaif, the film gives us the most important message to live life to the fullest without any regrets. The story revolves around three friends Kabir (Abhay Deol), Imraan (Farhan Akhtar) and Arjun (Hrithik Roshan) who take a trip to Spain to celebrate Kabir’s bachelor party. But while on the trip Arjun realizes that the most important thing he is missing in his life is to live every moment and be thankful for everything you have.