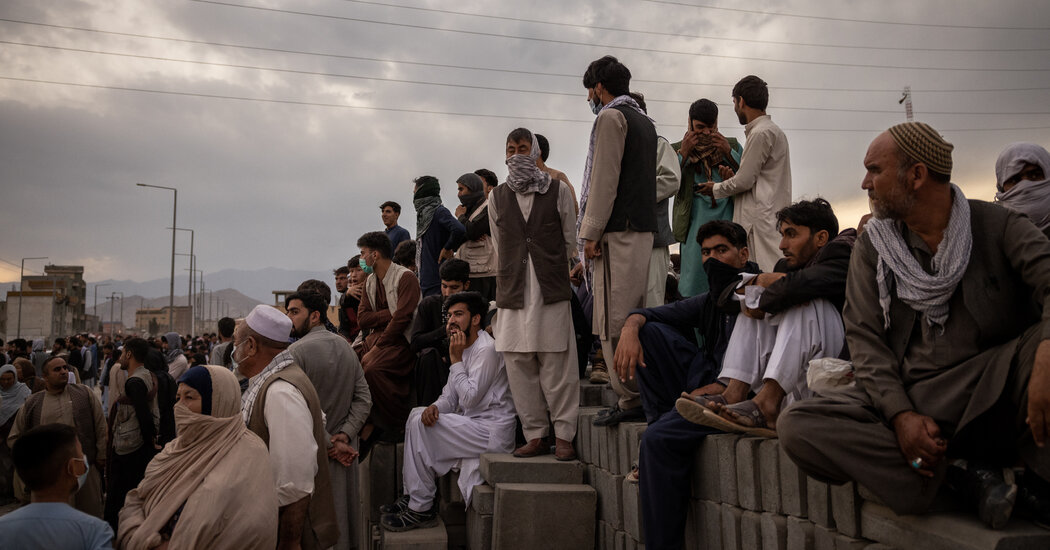 LONDON — The desperate scenes at the Kabul airport reverberated around the world on Friday, forcing President Biden to defend his handling of the chaotic evacuation and fueling recrimination from American allies that are struggling to get their own citizens out of Taliban-controlled Afghanistan.

Mr. Biden insisted the American-led operation made “significant progress” after a rocky start, with nearly 6,000 American troops evacuating 5,700 Americans, Afghans, and others on Thursday. Flights were suspended for several hours on Friday to process the crush of people at the airport, but they were resuming, he said.

“We’re acting with dispatch,” Mr. Biden said at the White House. “Any American who wants to come home, we will get you home.”

The president’s reassuring words, however, conflicted jarringly with the grim reality in Kabul, where panic reigned and the Taliban encircled the airport in a ring of terror. While Mr. Biden pledged not to abandon American citizens or Afghans who helped the United States, he left untold others in a dangerous limbo, conceding, “I cannot promise what the final outcome will be.”

Thousands of Afghans continued to besiege the airport gates, begging to get on planes as Taliban militants menaced them with sticks and rifle butts. Anxious crowds were pressed up against blast walls, with women and children hoisted into the arms of American troops on the other side.

In one harrowing image, a Marine leaned over razor wire to grasp a wailing baby from outstretched hands. The Pentagon said the baby was sick, received treatment and was later returned to his father.

Many more people were simply turned away, repulsed by reddish clouds of tear gas and volleys of rifle fire above their heads. A Taliban fighter put a gun to the head of one man and warned him, “Go back to your home or I will shoot you,” according to a person who witnessed the encounter.

While the south side of the airfield — the site of anguished scenes earlier in the week — was calmer on Friday, a witness reported that the gate at the north side, where American troops are in control, was mobbed. American-trained Afghan special forces units pushed back the crowds, some shooting in the air. The staccato pops of gunfire mixed with the roar of planes taking off.

On the airport’s eastern perimeter, hundreds of Afghans jostled with British soldiers as they tried to get into a British-controlled compound. In video posted to social media by the BBC, troops ordered people away from the entrance. Footage showed a soldier hurling a man to the ground.

“It is impossible to get to the airport — if you keep going and pushing, you may get shot dead and lose your life,” one Afghan man said on Friday. “I saw a teenage girl trampled yesterday. She was dead, and her father was crying.”

The man, who spoke on the condition of anonymity because he feared for his safety, said he had tried and failed six times in recent days to reach the airport

The mayhem, five days after the Taliban stormed the capital in a swift conquest that stunned American officials, attests to the terror inspired by the militants, as well as the logistical obstacles faced by the United States and its allies.

Mr. Biden said the United States was communicating with Taliban officials to guarantee safe passage for those who wanted to leave. But many people are hiding in their homes, fearful of reprisals if they were captured by militants.

While the president spoke of the heartbreak of the past week and said there would be plenty of time for “criticism and second-guessing,” he was defiant that leaving Afghanistan now was the right move. At one point, he referred to the Afghan people as Afghanis, a surprising lapse from someone who has visited the country multiple times over the last two decades.

“This is one of the largest, most difficult airlifts in history,” said Mr. Biden, flanked by Vice President Kamala Harris and Secretary of State Antony J. Blinken. “The only country capable of projecting this much power, with this much precision, on the other side of the world, is the United States of America.”

NATO foreign ministers also said they were working with the Taliban to make it easier for Afghans to get to the airport and vowed the allies would closely cooperate.

NATO’s secretary-general, Jens Stoltenberg, said the problem was not the availability of planes but the difficulty in filling them. “The main challenge we face,” he said, “is ensuring that people can reach and enter Kabul airport.”

The United States and Germany agreed on Friday that Ramstein Air Base in southwestern Germany will be used as a transport hub to try to bring as many people out of Afghanistan as possible.

“We are in agreement with all our partners on the ground that no seat on our aircraft should remain empty,” said Heiko Maas, Germany’s foreign minister.

The bottleneck at the airfield threatened to set off another humanitarian crisis. Relief agencies are struggling to bring food, medicine and other urgently needed supplies into Afghanistan, according to officials.

“We are running out of supplies and scrambling now to see how we can get the next shipment in,” said Richard Brennan, the regional emergencies chief of the World Health Organization. As tragic as are the images of people clinging to a departing American plane, he said, “the bigger humanitarian picture has been lost in all this.”

Even if the United States evacuates all the Afghans on its list, experts say that is a sliver of the total number of people who aided the American mission in Afghanistan during the two decades of military engagement there. The State Department and Defense Department said they would move 22,000 people, a number that includes Afghan workers, their relatives and other “at-risk Afghans.”

About 18,000 are in line for special immigrant visas guaranteed to people who were employed by the United States, and they have more than 50,000 relatives. The International Rescue Committee estimates more than 300,000 Afghan civilians have been affiliated with the United States since 2001, but only a minority qualify for refugee status.

Signs of the Taliban’s tightening grip over the capital were everywhere on Friday. An activist posted a photo on Twitter of billboards of women’s faces outside a Kabul beauty salon that were blacked out.

Khalil Haqqani, the leader of one of the most powerful and violent Taliban factions, appeared at Friday prayers, the high point in the Islamic week. Mr. Haqqani, 48, is on both the U.S. and United Nations terrorist lists, responsible for kidnapping Americans, launching suicide attacks and conducting targeted assassinations. He is now playing a prominent role in the new Taliban government.

To many Afghans and others who followed the war, Mr. Haqqani’s swaggering appearance was a stark reminder of who now runs Afghanistan. As if to drive home that point, Mr. Haqqani showed up carrying an American-made M4 rifle and accompanied by a security detail dressed in high-end American combat gear.

There were growing fears that the Taliban would abduct Afghans left behind to extort their family members outside the country. An Afghan interpreter who worked for the American military and who left several months ago told his former battalion commander that he recently received an email from the Taliban demanding that he return to face trial, or his family would be killed.

And yet there were also glimmerings of resistance.

Bismillah Khan Muhammadi, who served as defense minister in the ousted government of President Ashraf Ghani, said that “popular resistance forces,” mobilized to confront the Taliban, had recaptured three districts of Baghlan province, north of Kabul. Opponents of the Taliban have announced they were regrouping in the Panjshir Valley, which was a stubborn redoubt of opposition to the Taliban in the 1990s.

“Resistance against the terrorist Taliban is an obligation,” Mr. Muhammadi said in a post on Twitter. “The resistance is alive.”

Still, the devastating aftermath of the Taliban takeover continues to ripple through Washington, London and other capitals — and the finger pointing has begun.

In London, the foreign minister, Dominic Raab, came under fierce criticism for delegating a phone call to the Afghan foreign minister last weekend to a subordinate, while he was on vacation in Crete. The opposition Labour Party accused Mr. Raab of dereliction of duty and demanded he resign.

Mr. Raab insisted that the call was overtaken by events and that he was busy working on the evacuation while in Crete. As a result, he said, Britain was able to evacuate 204 British nationals and Afghan staff members the morning after the Taliban seized the capital.

Mr. Raab’s apparent lack of involvement crystallized a sense in Britain that their leaders were asleep at the wheel — a striking turn for a NATO member that contributed more troops to the Afghan war than any but the United States. It has also hardened feelings toward the United States, which barely consulted its ally about the timing or logistics of the withdrawal.

British newspapers pointed out that Mr. Biden did not take a call from Prime Minister Boris Johnson until Tuesday, days after Britain requested it. Some British diplomats said they could not recall a time when an American president came under harsher criticism than Mr. Biden has in recent days.

“It shows that Biden wasn’t that desperate to get the prime minister’s input on the situation,” said Kim Darroch, a former British ambassador to Washington. “It’s all escalated a bit. It’s not a great sign.”

Reporting was contributed by Jim Huylebroek in Kabul, Carlotta Gall in Istanbul, Eric Schmitt and Zolan Kanno-Youngs in Washington, Nick Cummings-Bruce in Geneva, Steven Erlanger in Brussels, and Marc Santora in London.