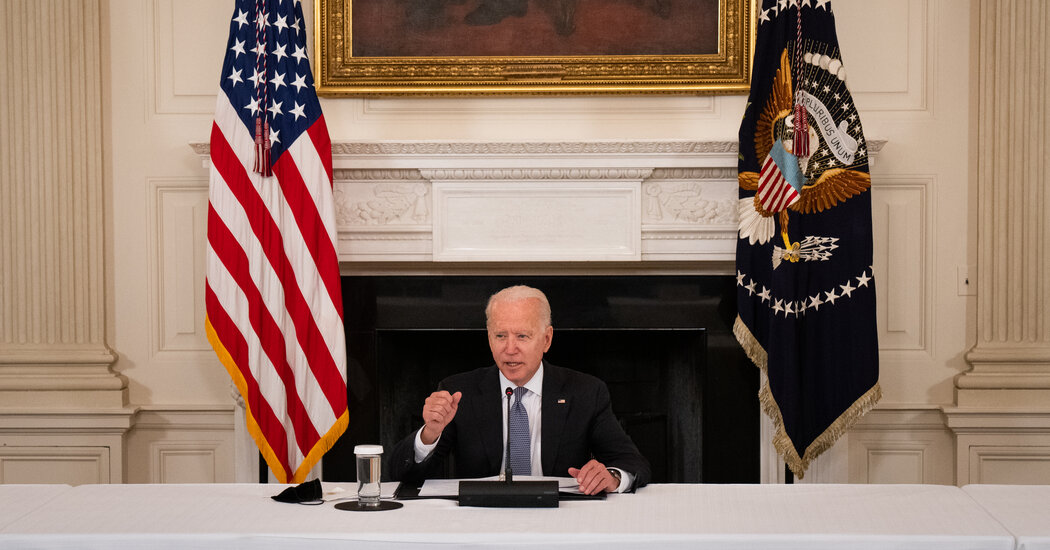 President Biden’s presidency raised expectations among many Cubans of a return to the Obama days, when the United States sought to bury the last vestige of the Cold War by restoring diplomatic relations with Havana and calling for an end to the embargo.

Instead, Mr. Biden is taking an even harder line on Cuba than his predecessor, President Donald J. Trump, who tightened restrictions on travel and financial transactions.

The island became an early foreign policy crisis for the Biden administration after Cubans poured into the streets to denounce their authoritarian government and the food and medicine shortages exacerbated by the pandemic. The rare act of rebellion was quashed with the biggest crackdown on dissent in a generation.

The White House imposed new sanctions against Cuban officials in the past few weeks in response to the arrest of hundreds of protesters who took to the streets in cities across the island nation on July 11. Mr. Biden also asked government experts to draw up plans for the United States to unilaterally expand internet access on the island and has pledged to increase support for Cuban dissidents.

“We hear the cries of freedom coming from the island,” Mr. Biden said during a recent meeting with Cuban Americans in the White House. “We’re holding the regime accountable.”

To many Cubans who had seen in the election of a Democratic president reason to hope for a return to normalized relations — with more flights to the island and more channels to send cash, medicine and food to loved ones — Mr. Biden’s approach has been a blow.

“The past month has been really, really hard to take,” said Manuel Barcia Paz, a Cuban scholar in the United Kingdom, who has struggled to send money to his ailing parents in Cuba.

Many Cubans at home and abroad had expected that Mr. Biden and his Cuban counterpart, President Miguel Díaz-Canel Bermúdez, would take steps to return to the slow and halting process of normalizing relations.

The Obama administration embarked on that path at the end of 2014, following months of secret negotiations that included a prisoner swap. Mr. Obama argued that making it easier for Americans to travel to Cuba and invest in its nascent private sector stood a better chance at promoting economic and political changes on the island than the regime-change policy Washington has pursued since the 1960s.

Mr. Menendez, the son of Cuban immigrants who was an ardent critic of the Obama gambit toward the island, has relished seeing a new Democratic president largely in lock step with his sticks-over-carrots approach.

“Let us not repeat the mistakes of the past,” Mr. Menendez said in a speech on the Senate floor last week, in which he praised Mr. Biden and called for an even tougher set of measures. “Let us not fall victim to tired myths.”

The latest surge in tension comes at a time when the United States has a skeletal staff at its embassy in Havana. Most American diplomats were evacuated in 2017 following unexplained illnesses experienced by several staff members, which led to serious cognitive problems.

That has created a massive backlog of immigrant visa applications; currently Cubans must apply for visas in Guyana, which in an era of travel restrictions and reduced flights, requires a circuitous route with stops in Russia, Turkey and Panama.

“We thought he would have come up with some way to manage all of this,” Yaite, a 26-year-old mother of two, said of Mr. Biden. She has been waiting over a year for a visa appointment, and asked that her surname not be published for fear of reprisals.

“He has sanctioned the police, but let’s be realistic: That’s not going to reach them,” Yaite said. “It doesn’t affect them at all. His sanctions do not cross the sea.”

Mr. Barcia, the scholar, said the past few weeks have left him feeling furious at the Cuban government for its heavy-handed response to the protests and frustrated by the American response. The result is most acutely felt by ordinary families like his, he said. His father is recovering from a stroke and needs blood-thinners; his mother is hospitalized.

When the United States tightened restrictions on sending money to Cuba to prevent the government from taking a cut, and limited the number of flights, it became hard for Cubans abroad to help to loved ones on the island.

“I’m disappointed in Biden, because he hasn’t done anything,” Mr. Barcia, a professor of global history at the University of Leeds, said. “There has to be a way to get money to Cuba without the government taking a big chunk.”

Antonio Camacho, who owns Burner Brothers, a bakery in Havana, was among a new generation of entrepreneurs who prospered amid the torrent of tourism and investment that flooded into Cuba after 2014. Now, new American restrictions and the coronavirus pandemic have gutted the tourism industry, leaving Cubans with little disposable cash to spend at businesses like his.

“It’s disappointing,” Mr. Camacho said of the actions he’s seen Mr. Biden take. “If he had stuck with Obama’s plan, it would have been really good to do business, to enjoy the opening between the two countries.”

Cuban leaders blame the privations on the island — where food and medicine shortages have grown worse during the Covid-19 pandemic — on the embargo, a web of laws and regulations that began in the 1960s. And they point to the embargo as the reason major economic reforms, including the right to own property and run a small business, have been throttled by red tape and state interference.

“The blockade forces you to act like you’re constantly defending yourself and analyzing carefully each step you’re going to take, so that they don’t destroy you,” Mr. Díaz-Canel said in an interview in 2018, explaining the slow pace of changes the ruling Communist Party had embraced.

Lillian Guerra, a historian at the University of Florida who specializes in Cuba, doesn’t buy it. She said Mr. Díaz-Canel, a party stalwart who was handpicked for the presidency by Raúl Castro when he stepped down in 2018, has never shown a desire to lead transformational changes.

“They try to do as little as possible to restructure the power of society in order to maintain control,” she said, arguing that a new period of tension with Washington gives the government a pretext to clamp down. “It makes it possible for them to continue to keep Cuba barefoot and pregnant and terrified at what might be next.”

Thousands of Cubans are not sticking around to find out. Between October 2020 and June of this year, the border patrol intercepted 21,453 single Cuban adults and 4,718 families trying to enter the United States along the border with Mexico. Those numbers were a major increase from the 12,502 individuals and 1,440 families detained during the previous fiscal year.

The Coast Guard has taken 618 Cuban rafters into custody and returned them to the island so far this fiscal year, by far the highest number since 2017.

Hárold Cárdenas, a political analyst who founded La Joven Cuba, a website that hosts articles and commentary about current events in Cuba, is among the thousands of Cubans who left the island in recent years.

“People in my generation reconsidered the possibility of migrating in December 2014 because the path Obama offered allowed us to imagine a future on the island,” said Mr. Cárdenas, who now lives in the Washington area. “That hope is now dead.”