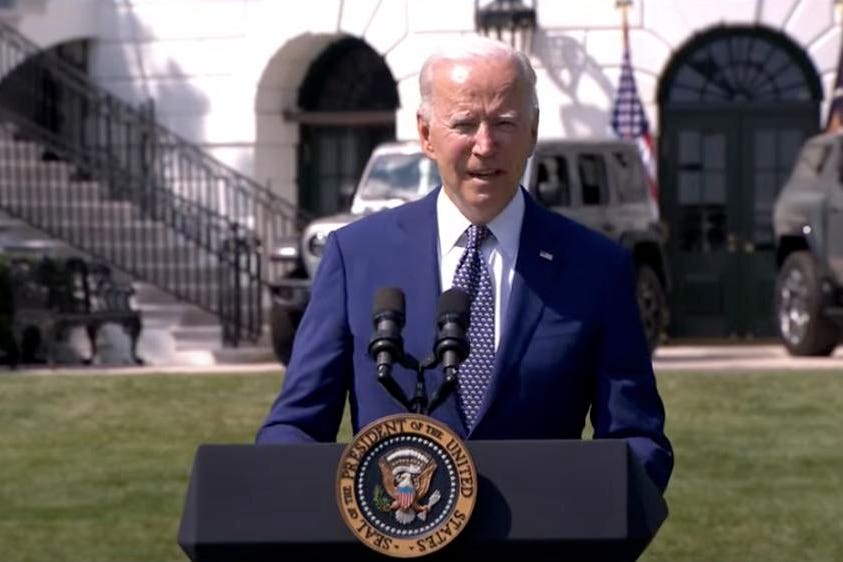 President Joe Biden’s plan to accelerate U.S. sales of electric cars and trucks to 50% of all new vehicle purchases by 2030 could include more generous customer incentives of as much as $12,500. But those made by Tesla, the biggest seller of battery-powered autos, wouldn’t qualify for that maximum amount as its U.S. assembly facilities don’t use union labor.

At a briefing on the White House lawn on Thursday, Biden was introduced by a United Auto Workers union official, and  joined by General Motors CEO and Chair Mary Barra, Ford CEO Jim Farley and Stellantis COO Mark Stewart. All three companies rely on UAW employees. Notably, Tesla, the fourth-biggest U.S. automaker by sales volume—but which doesn’t have UAW representation for its workers—was absent from the event. Prior to the event, Elon Musk tweeted that it “seems odd that Tesla wasn’t invited.”

During the briefing Biden endorsed a proposal from two Democratic Senators, Ron Wyden of Oregon and Debbie Stabenow of Michigan, that would extend $7,500 federal tax credits that were enacted more than a decade ago (and that have already ended for buyers of GM and Tesla vehicles), and add more enticements for vehicles produced in the U.S. and by union workers.

Getting EV sales to grow “means purchasing incentives for consumers to buy clean vehicles, union-made, right here in America,” Biden said. He wants Congress to approve the proposal from Stabenow and Wyden that provides “a $7,500 basic credit, a $2,500 credit for vehicles made in American and an additional $2,500 credit for union-made vehicles.”

That extra potential benefit for buyers would also be a big help to GM, Ford and Stellantis’ Chrysler, Jeep and Dodge brands as the traditional U.S. Big 3 automakers prepare to dramatically expand their battery-powered vehicle lines. Even if the union-oriented incentive doesn’t make it into law, any expansion of federal support for electric vehicle sales, combined with the Administration’s plan to get 500,000 new public EV charging stations built across the country, could dramatically boost demand for them.

Shifting the market over the next nine years away from petroleum won’t be easy, even with incentives and more charging stations. So far in 2021, battery-electric vehicles accounted for just 2.2% of new vehicle sales in the U.S., up from 1.4% in the first half of 2020, Edmunds estimates.

The “Clean Energy For America Bill” that’s making its way through the Senate provides incentives only for electric vehicles that sell for less than $80,000, and makes them available for customers until the 50%-market share goal is achieved. If approved, Tesla’s Model 3 and Model Y, and potentially its Cybetruck, would qualify for incentives of up to $10,000. The company’s high-end Model S and Model X would not.

The UAW has yet to convince enough employees at Tesla’s Fremont, California, plant—which was a union facility for decades in its previous incarnations as a GM plant and then a joint-venture factory shared by Toyota and GM. Musk has also opposed unization of the plant. In March the National Labor Relations Board ruled that the billionaire entrepreneur violated U.S. labor law by firing an employee at Fremont who advocated for the UAW and for a tweet that seemed designed to discourage workers from joining the union.

“Nothing stopping Tesla team at our car plant from voting union. Could do so tmrw if they wanted. But why pay union dues & give up stock options for nothing?” he tweeted. The NLRB also ordered the world’s second-wealthiest human to delete the tweet. He has yet to comply with that request and is appealing the ruling.

Just before the start of Biden’s briefing, Musk shared his views about not being included at the event with a meme saying: “I’m not saying it is sabotage. But it is sabotage.”