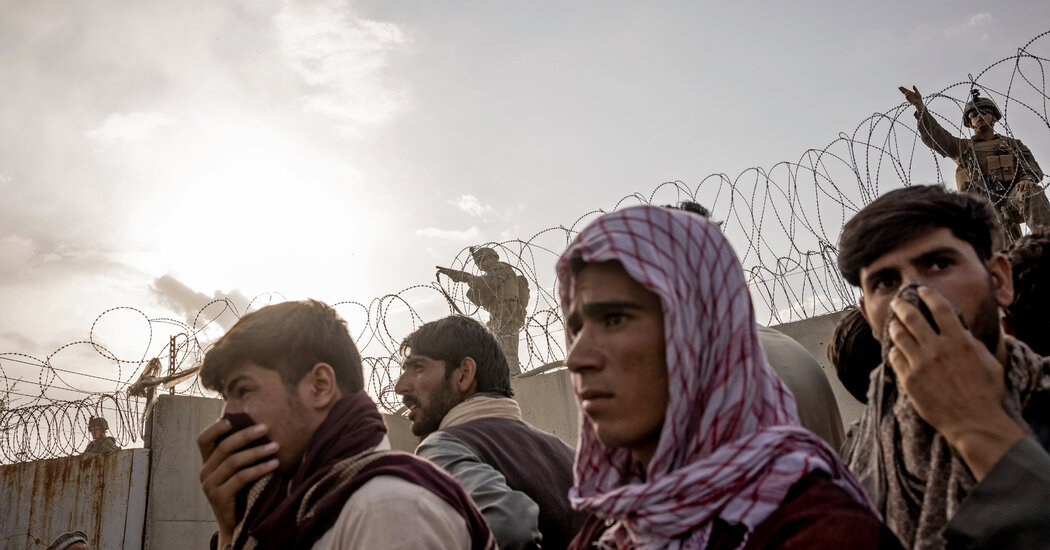 Before the Taliban marched through the gates of Kabul, before the desperate scenes of a makeshift airlift, before a baby was passed over the barbed wire on the airport walls, President Biden had one simple way of framing his decision to end the endless war in Afghanistan: national interest.

“The United States cannot afford to remain tethered to policies creating a response to a world as it was 20 years ago,” he said on July 8. “We need to meet the threats where they are today.”

It was a classic — and at the time broadly popular — bit of realpolitik. America today has a lot of important interests. To name a few: countering nuclear proliferation, standing up for human rights, combating terrorism and promoting democracy, which George W. Bush said in his second inaugural address would be the mission of the U.S. for decades to come.

But as Graham T. Allison, the Harvard political scientist, often says to students, “While all of these are important, some interests are more important than others.” So it is in moments like this that we find out what a president’s hierarchy of priorities is all about.

And Biden has been clear about his.

We have an interest in facing down the terrorist threat, the president said, but that threat is no longer centered in Afghanistan. More important, he said, is recognizing that “strategic competition with China” will “determine our future.” Other threats — particularly cyberthreats — have also moved from peripheral issues to center stage.

The logic is hard to argue with. The China challenge is unquestionably the most important and complex problem in American national security — part military, part technological, part economic.

And the attack on Colonial Pipeline this year, which shut off a quarter of the fuel running up the East Coast, was a reminder that a well-organized cyberattack can do a lot more damage than a localized terrorism incident, even if it makes for less dramatic television.

Had the withdrawal from Afghanistan gone as planned, with a relatively orderly return of the remaining 2,500 American troops and a relatively smooth handover of the defense of the country to the Afghan National Security Forces, Biden would likely be basking in praise for his Kissinger-like realism.

But as they say in the military, the enemy also gets a vote. What the Taliban have done, with a brutally effective strategy that forced the collapse of the American-backed Afghan government a year or two faster than intelligence assessments thought possible, has forced Biden to defend his priorities. It is hard to get Americans to focus on a China strategy when their screens are filled with images of desperate Americans, and the thousands of Afghans who helped them over two decades, trying to get out of Afghanistan before they are hunted down.

So, does Biden’s argument still hold up? Yes, but with some major caveats.

To rescue his focus-on-the-vital strategy, Biden knows he must first rescue those Americans and Afghan allies, whatever it takes. One of his closest aides told me last week that his legacy on Afghanistan might be decided not on how he did in the past two weeks, but on how he does in the next two. No matter how good his geopolitical strategy, if the on-the-ground execution does not improve, the withdrawal will likely be remembered as a disaster.

Second, superpowers need to be able to walk and chew on their competitors at the same time. The resources needed to deal with the Afghan airlift — the one Biden on Sunday compared to the challenge of the great Berlin airlift of Cold War fame — are drastically different than the ones needed to compete with China, or to deal with cyberattacks originating from Russia.

Biden disagreed yesterday. History, he said, would ratify his judgment that Afghanistan was the wrong war, and that the leaders of China and Russia would “love nothing better for us to continue to be bogged down there.” They certainly would. But avoiding being bogged down is about more than getting out — it’s about getting out in a way that enhances American leverage and stature. We’re a long way from that.

David E. Sanger is a White House and national security correspondent for The Times.

Sleeper smash hit: If there is a film of New York’s 2021 summer, this might be it.

The Media Equation: Russian journalists are meeting a government crackdown with dark humor — and subscribers.

Quiz time: The average score on our most recent news quiz was 8.9. Can you top that?

Advice from Wirecutter: Make your own roadside emergency kit.

Lives Lived: In 1955, Lucille Times began a one-woman protest of the segregated bus system in Montgomery, Ala. Her activism inspired a mass boycott six months later, beginning with the arrest of Rosa Parks. Times has died at 100.

Is OnlyFans ‘discarding’ its base?

Last week, OnlyFans, a platform where users can sell subscription access to their content, announced it would ban sexually explicit imagery starting in October.

The company handled more than $2 billion in sales last year, Bloomberg reported. Still, it has struggled to get funding from investors, who are hesitant to associate with the company’s sexually explicit material, as Axios reported. In a statement, OnlyFans said it was blocking explicit content at the request of its “banking partners and payout providers.”

“Someone said it’s like Burger King saying they’re not selling burgers anymore,” Kenneth Pabon, a 22-year-old OnlyFans creator, told The Times. “This is what OnlyFans is known for.” — Sanam Yar, a Morning writer

The pangram(s) from Friday’s Spelling Bee were arthropod and hardtop. Here is today’s puzzle — or you can play online.