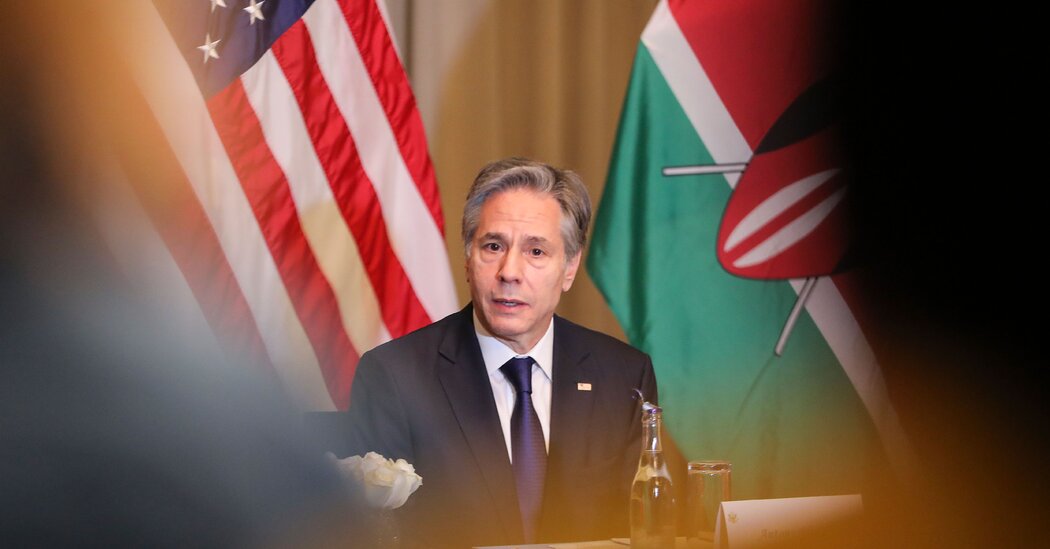 Secretary of State Antony J. Blinken is visiting Kenya, starting a swing through Africa amid political upheaval and questions about the Biden administration’s approach to the continent.

Mr. Blinken arrived in Nairobi overnight Wednesday, making him the highest-ranking Biden administration official to visit sub-Saharan Africa. He will try to advance diplomacy to pull Kenya’s neighbor, Ethiopia, back from the brink of what experts say could be an expansion of the devastating civil war that has been raging in the north of the country, with the potential for genocide.

On a stop in Nigeria this week, Mr. Blinken will outline a vision for U.S. policy toward Africa, one that is expected to focus on the value of democracy to the continent’s future.

Some critics say the Biden administration has been inattentive to Africa, a common complaint about U.S. foreign policy but one that has gained more currency as China, America’s top strategic competitor, plants deeper political and economic roots on the continent and anti-American jihadist groups continue to thrive there.

American officials are concerned about democratic backsliding across the continent, which has seen a wave of military coups in recent months — including in Sudan, where a coup last month quashed a democratic transition that followed the 2019 ouster of the country’s longtime autocratic ruler, Omar Hassan al-Bashir. Experts say the four successful military coups in Africa this year — including in Guinea, Chad and Mali — are the highest number in more than 40 years.

Nigeria’s democracy is also troubled: As a candidate, Mr. Biden condemned the country’s government for endemic corruption, and for violently cracking down on demonstrators seeking more freedom for civil society.

Kenya has played a key role in diplomatic efforts to peacefully resolve a conflict between the Ethiopia’s central government and rebels in its northern Tigray region.

“This is Rwanda-esque,” added Patricia Haslach, who served as the U.S. ambassador to Ethiopia from 2013 to 2016. Ms. Haslach stopped short of saying that a genocide might be occurring, but other experts have called that a realistic possibility in a conflict increasingly defined by ethnic identity.

The Clinton administration’s failure to intervene and potentially prevent the massacre of as many as 800,000 ethnic Tutsis in Rwanda in 1994 has haunted former U.S. officials for decades.

Mr. Blinken plans to conclude his trip with a visit to the Senegalese capital, Dakar.

Secretary of State Antony J. Blinken opened his visit to Kenya by meeting on Wednesday with civil society leaders in Nairobi, the capital, encouraging them to keep up the fight to defend democracy.

“Not just in Kenya, but around the world, you’ve seen over the last decade or so what some have called a democratic recession,” Mr. Blinken said. “Even vibrant democracies like Kenya are experiencing these pressures, especially around election time.”

The Biden administration’s top diplomat was speaking on the first day of a four-day swing through Africa, his first visit to the continent apart from a brief stop in Cairo in May.

With Kenya headed toward national elections in August, Mr. Blinken noted that its journalists and other civil society leaders face mounting threats.

“We’ve seen the same challenges here that we’ve seen in many parts of the world,” he said, including misinformation, voter intimidation and corruption.

Defending democracy on a continent that has seen four military coups in the past year will be a central theme of Mr. Blinken’s visit, which will also focus on coronavirus vaccine distribution and political turmoil in two of Kenya’s neighbors, Ethiopia and Sudan.

Mr. Blinken acknowledged the imperfections of the United States’ own fractured political system.

“The United States is hardly immune from this challenge,” he said. “We’ve seen how fragile our own democracy can be.”

Counterterrorism was expected to be a key topic. Hours before Mr. Blinken’s arrival in Nairobi, suicide bombers detonated two bombs in the heart of Kampala, the capital of neighboring Uganda, killing at least three people and injuring at least 33 others. The Islamic State, which has been active in East Africa for years, took responsibility for the attack.

Not long ago, the East African region known as the Horn was seen as among the most dynamic on the continent, a place of fast-growing economies, dictator-toppling revolutions and intense jockeying between rival foreign powers seeking influence. It even had a Nobel Peace Prize winner, Ethiopia’s youthful prime minister, Abiy Ahmed.

Now, as Secretary of State Antony J. Blinken begins a visit to neighboring Kenya, the Horn of Africa is a crucible of chaos, plagued by spreading war and famine in Ethiopia and a recent military coup in Sudan that threatens to derail its transition to democracy.

Those crises have made the Horn by far the greatest focus of American policy in Africa this year. Yet Washington has little to show for its efforts.

In Ethiopia, the Biden administration dispatched senior envoys to reason with Mr. Abiy, imposed visa restrictions on Ethiopian officials linked to alleged atrocities and threatened sanctions against leaders on both sides of the conflict.

Mr. Abiy, who is facing off against ethnic Tigrayan rebels pressing toward the capital, has spurned repeated American appeals to negotiate — a priority item for Mr. Blinken, whose arrival in Kenya is part of a diplomatic scramble to avert what he has called the risk that Ethiopia could implode.

In some ways, it’s a similar story in Sudan. The United States bet heavily on the success of the 2019 revolution that ousted the dictator Omar Hassan al-Bashir, lifting decades-old sanctions and welcoming Sudan back into the international fold.

Some critics have blamed the Biden administration for reacting too slowly, in particular for not taking firm action sooner against Mr. Abiy.

Others say the growing field of foreign countries with interests in the Horn of Africa — including the United Arab Emirates, Turkey, Qatar and Russia — has frustrated American diplomacy.

And the growing crisis may simply have spun too far out of control.

“The Americans might have handled their relations with Ethiopia a bit better, but on the whole they have been committed,” said Murithi Mutiga, a senior analyst with the International Crisis Group. “I think this crisis mostly stems from the cold logic of conflict in a country with a long history of domination rather than accommodation.”

It didn’t take much for President Biden to strike a different note in Africa.

His predecessor, Donald J. Trump, referred to some African nations as “shithole countries,” barred citizens in six of them from traveling to the United States, and failed to visit the continent once while in office.

Mr. Trump’s main policy focus was in slowing Chinese influence across Africa, with limited success. His wife, Melania Trump, visited four countries, but raised eyebrows in Kenya by wearing a colonial-style pith helmet, associated with a violent and racist past.

The Biden administration immediately struck a more respectful, engaged tone on the continent. It rescinded the travel ban. It dispatched senior diplomats to grapple with the conflict in Ethiopia, and it sent teams of military advisers to counter the growing influence of Islamist militants in many countries. Instead of praising autocrats, it spoke out against them.

But to many Africans, the U.S. engagement with Africa is still focused on threats rather than opportunities. And they say they are waiting for the Biden administration to articulate a policy that would suggest a new direction.

“Historically, the perception on the continent has been that American policymakers see Africa as a problem to be solved,” said Murithi Mutiga, a senior analyst with the International Crisis Group. “Their support has come mainly in the form of humanitarian aid — and still does today.”

The problem-solving approach was an undercurrent theme again on Wednesday when Secretary of State Antony J. Blinken landed in Kenya, his first trip to Africa in that role, hoping to rally diplomatic support for an urgent effort to broker peace in Ethiopia.

It was Mr. Blinken’s second attempt to visit the continent — a trip planned for August was canceled over the crisis in Afghanistan — and Mr. Biden, who visited Kenya and South Africa as vice president, has yet to announce a trip.

For many ordinary Americans, too, Africa is a continent that usually seizes their attention only when a huge crisis is unfolding: famine in Ethiopia in the 1980s, the genocides in Rwanda in 1994 and Darfur in the 2000s; the H.I.V./AIDS epidemic and the Ebola outbreak in West Africa.

Increasingly, though, economists, analysts and ordinary Africans say they would like the United States to engage with Africa as a place of possibility. It is the world’s youngest continent, with the highest population growth rates, and many of its fastest growing economies (albeit often in countries starting from a very low base).

They also want to redefine the notion of Western responsibility. After the recent COP26 climate change summit, some activists are calling on large polluters like the United States to recognize their obligation to African nations with relatively small carbon footprints that are already bearing the brunt of climate change.

As if the war in Ethiopia were not enough, Secretary of State Antony J. Blinken’s Africa visit will also be shadowed by a military coup in Sudan, an unexpected crisis that blew up only a few weeks ago — in the face of one of his most seasoned envoys.

For days in October, that envoy, Jeffrey Feltman, had navigated between Sudan’s army chief, Lt. Gen. Abdel Fattah al-Burhan, and civilian prime minister, Abdalla Hamdok, striving to avert the collapse of a democratic transition that had been underway for two years.

At a final meeting late on Oct. 24, General al-Burhan argued that Sudan’s cabinet should be dismissed and replaced, but he gave no indication that he was preparing to seize power. With that reassurance, Mr. Feltman caught a flight to Qatar where, on landing, his phone lit up: A coup was underway in Sudan.

Protests erupted, Mr. Hamdok has remained under house arrest and other civilian officials have also been detained. General al-Burhan has taken steps that suggest he wants to retain power, despite his assurances otherwise. For Mr. Feltman, the military coup was a nasty surprise that has proved difficult to reverse.

“They lied to him,” said Nureldin Satti, Sudan’s ambassador to the United States, referring to his country’s military leadership. “This is very serious because when you lie to the U.S., you have to pay the consequences.”

As Mr. Blinken flew to Africa on Tuesday, there were some possible signs of progress in Sudan. Another of his top aides, Assistant Secretary of State Molly Phee, was in Khartoum, and met with both General al-Burhan and the detained prime minister. Ms. Phee said on Twitter that she was “grateful for the opportunity to meet with @SudanPMHamdok today to discuss ways forward to restore Sudan’s democratic transition.”

According to the official Sudan News Agency’s account of Ms. Phee’s meeting with General al-Burhan, he said that, regarding political detainees, “steps for their release have already begun, and that any detainee who is not proven guilty of a criminal offense will be released.”