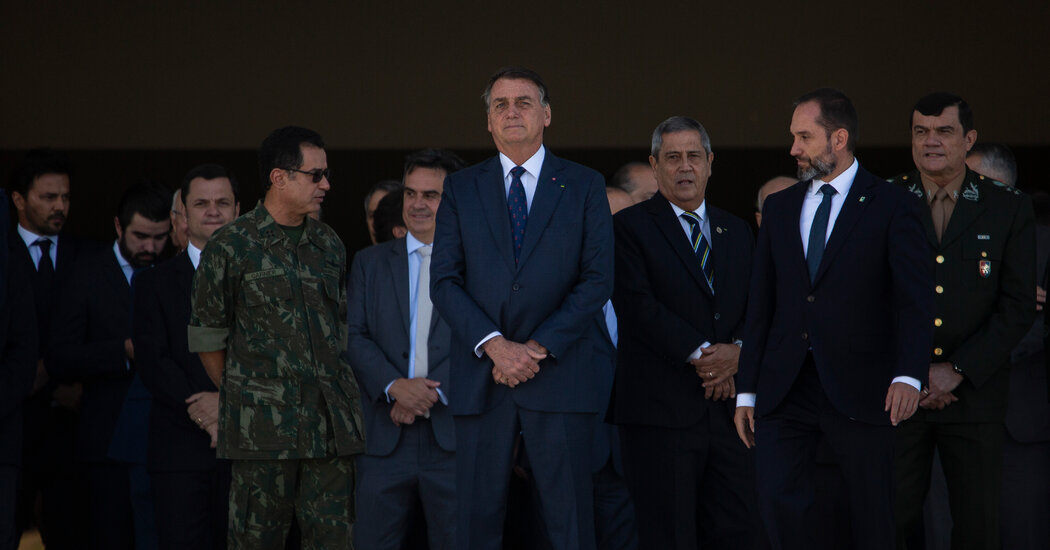 RIO DE JANEIRO — Facing the prospect of a crushing defeat at the polls next year, President Jair Bolsonaro of Brazil is rousing supporters for an existential battle — against voting machines.

Beleaguered by the devastating toll of the coronavirus, a sputtering economy and a surging rival, the president has launched a full-throated attack on the electronic voting system Brazil has relied on for 25 years. Unless voters get to record their choice on paper ballots, which the current system doesn’t allow, Mr. Bolsonaro has warned that the 2022 election could be suspended.

“An election outside those parameters is not an election,” Mr. Bolsonaro told supporters during a recent rally in the southern state of Florianópolis, calling on his base to prepare to “fight with all the weapons.”

The crusade for a return to a paper ballot system — a longtime obsession of Mr. Bolsonaro’s — has alarmed leaders in the judiciary, opposition lawmakers and political scientists, who see in his playbook the makings of a power grab in Latin America’s largest nation. Election officials and independent experts say Brazil’s electronic voting system, which was adopted in 1996, has strong safeguards and a stellar track record.

“To defile the public debate with disinformation, lies, hatred and conspiracy theories is undemocratic conduct,” Luís Roberto Barroso, a Supreme Court justice and the head of Brazil’s electoral tribunal said in a recent speech.

Citing democratic backsliding in Turkey, Hungary, Nicaragua and Venezuela, Justice Barroso said it has become alarmingly common for leaders who come to power through the ballot box to “deconstruct, brick by brick, the pillars of democracy.”

Critics fear that much like President Donald Trump convinced many supporters that he was robbed of a victory in 2020, Mr. Bolsonaro is laying the groundwork to dispute an electoral loss in October 2022.

Fernando Luiz Abrucio, a political scientist at the Getúlio Vargas Foundation, said that such a scenario could lead to far more mayhem in Brazil, where democracy was restored only in the late 1980s, than it did in the United States.

“If he loses the election, he can mobilize the military forces, the police, the militias,” Mr. Abrucio said. “The degree of violence could be much greater than the episode in the U.S. Capitol.”

The prospect of a destabilizing showdown next year loomed on Tuesday as Mr. Bolsonaro’s government organized a military parade in which military tanks rumbled past Congress just hours before legislators were scheduled to vote on a bill that would require electronic voting machines to print paper ballots.

The measure was widely expected to be rejected because most major parties opposed it, and the military display triggered a cascade of condemnation statements and memes.

“It’s unacceptable that the armed forces have allowed their image to be used in this manner, to raise the possibility of the use of force in support of a coup-minded antidemocratic measure defended by the president,” nine opposition parties said in a statement.

Mr. Bolsonaro began railing against the voting system several years ago, when he was a fringe, ultraconservative member of Congress with little power or visibility in the capital.

In 2015, he proposed a Constitutional amendment requiring that electronic machines print a record of each vote, which would be deposited in a ballot box. Mr. Bolsonaro argued at the time that the redundancy would reduce the “chance of fraud to zero.”

Congress approved the measure, but the Supreme Court said it violated privacy and ruled it unconstitutional, which meant the voting system remained unchanged.

The matter faded from the political radar until Mr. Bolsonaro emerged as the presidential front-runner following the first round of voting in the October 2018 election. Instead of celebrating his triumph, Mr. Bolsonaro stunned the political establishment by claiming that he had been robbed of an outright victory, which would have required winning more than 50 percent of votes.

Even after he won the election in 2018 with a 10 percentage point margin, Mr. Bolsonaro continued to claim, without presenting evidence, that the system was rigged. His quest to discredit the integrity of the election system has become louder and more audacious in recent weeks as Mr. Bolsonaro’s standing in the polls has slipped amid growing exasperation over the government’s handling of the coronavirus pandemic.

A poll conducted in early August by the firm Poder Data shows that one in every five voters who supported Mr. Bolsonaro in 2018 would now vote for his main rival, former President Luis Inácio Lula da Silva. In a two-candidate matchup, Mr. da Silva would trounce the incumbent 52 percent to 32 percent, according to the poll.

Mr. da Silva on Tuesday accused the president of using the printed vote debate to divert attention from his track record on unemployment and poverty, which have grown during the pandemic.

“Bolsonaro must be ready to face this fact: He is going to lose the election,” Mr. da Silva said in a statement, raising the prospect that the incumbent will refuse to participate in the traditional transfer of power rituals.

Supreme Court justices have reacted with alarm to Mr. Bolsonaro’s attacks against the voting system, which have played out in lengthy interviews by conservative journalists and in the videos the president broadcasts on social media. Earlier this month, the court opened investigations into the president’s claims about voting machine fraud.

Filipe Barros, a lawmaker who supports Mr. Bolsonaro, said in an interview that electronic machines could be tampered with and that paper ballots would create a mechanism to independently certify the outcome recorded by machines.

Experts say the voting machines in Brazil, where voting is compulsory, have robust security measures. They are not connected to the internet, which makes them all but impossible to hack. The identity of voters is verified by a biometric scanner that scans a person’s fingerprint.

Last month eight former attorneys general issued a statement calling efforts to create a paper ballot system unconstitutional, arguing that the added step would compromise the right to vote secretly. In Brazil, the attorney general’s office is in charge of investigating electoral crimes.

Before the current system was adopted, experts say, it was common for political power brokers to take people to the polls and verify how they filled out ballots.

“At no time has the current voting system been called into question, nor has there been any evidence that it has ever been tampered with,” said Raquel Dodge, a former attorney general who was among the signatories of the letter. “Brazil’s electoral system is very advanced, and I believe we need to make this clear and transparent to Brazilian voters and the world.”

President Biden’s administration has also demonstrated its support for the current system, with Jake Sullivan, Mr. Biden’s national security adviser, raising the topic with Mr. Bolsonaro during a recent visit to Brasília.

American officials conveyed “great confidence in the ability of the Brazilian institutions to carry out a free and fair election with proper safeguards in place against fraud,” Juan González, the senior director for the Western Hemisphere at the National Security Council told reporters on Monday. “We stressed the importance of not undermining confidence in that process.”