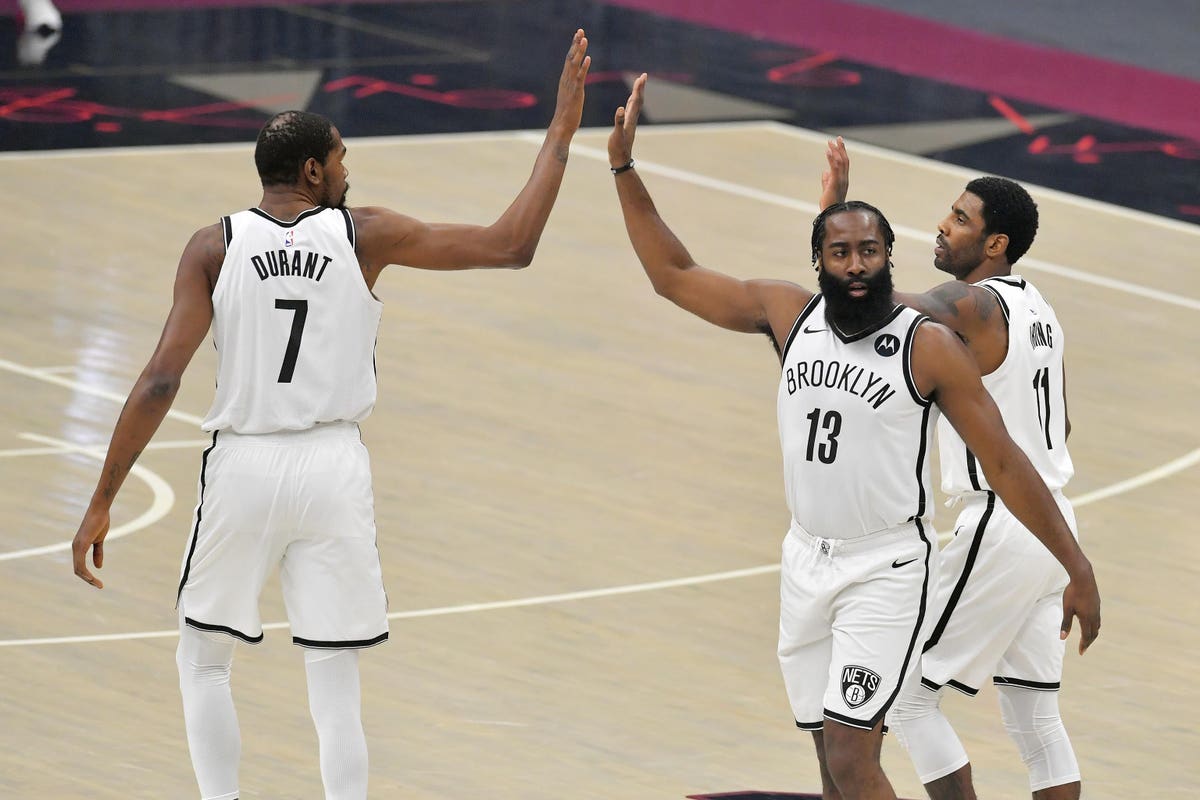 Brooklyn Nets GM Sean Marks is “very confident” that he can get Brooklyn’s “Big 3” of Kevin Durant, James Harden and Kyrie Irving extended through the 2025-26 season by the start of training camp next month.

Coming off winning his third gold medal with the the USA men’s basketball team, Durant recently signed a four-year, $198-million extension with the Nets, and Marks said talks with Irving and Harden are underway “now.”

“I feel very confident that first day of training camp we’ll be looking at those three in particular being signed, sealed and delivered and being part of the Brooklyn Nets for a long time to come,” Marks said Wednesday on a Zoom call.

Marks said both Harden (hamstring) and Irving (ankle) are expected to be full healthy for the upcoming season after both missed critical games during the postseason when the Nets fell to the Milwaukee Bucks in the Eastern Conference semifinals.

“From a health standpoint, no reason to be concerned about either one,” he said.

Marks said Durant was anxious to get his extension done first after coming back from injury and having a banner season, and then playing in the Olympics.

“We have definitely had conversations with all three of them and Kevin was honestly extremely straightforward about I want to be here and I want to get it done,” Marks said.

“And I don’t blame him. He’s coming off a gold medal and wanting to really focus on recovery and getting himself ready for the season will take a little bit. So I think for him from a peace of mind standpoint, just putting that aside. And it was obviously very important for us. I can’t tell you how important it was. This is franchise-changing when you can lock a person like Kevin up and he wants to commit to being here for the foreseeable future.”

The Nets and new-look Lakers with Russell Westbrook have been installed as preseason NBA favorites, followed by the reigning NBA champion Milwaukee Bucks and runner-up Phoenix Suns.

Marks said the Nets “still have to go through” Giannis Antetokounmpo and the Bucks to get out of the East and said there is still great “parity” in the NBA.

“We know there’s unfinished business here and we hope that we can get there,” he said.

Marks said another primary goal in the offseason was to improve the team’s porous defense after they ranked as one of the worst defensive teams in the league.

“Those guys will definitely plug in some holes without a doubt,” he said. “At the same time, we’ll certainly miss the guys who are no longer here and wish those guys well. I think we have addressed a lot of the needs. We won’t have addressed all of the needs until probably close to the trade deadline.”

Marks said center De’Andre Jordan, who was reportedly shopped in trade talks, remains part of the roster “as it stands now.”

If the Nets do extend their “Big 3,” Marks believes the Nets will continue to contend for an NBA championship for the next half decade.

“We really haven’t done anything yet so we really have to remind ourselves there’s a long, long road ahead and there’s a lot of great teams that we need to try and get by,” he said.

“It doesn’t mean our aspirations aren’t ones of championships, that’s the plan here without a doubt.”